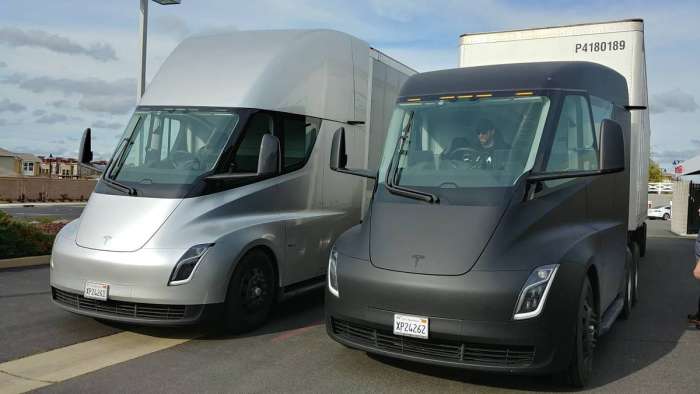 Tesla CEO Elon Musk's statement that production of Tesla Semi’s battery and powertrain would take place at Giga Nevada, points strongly to the idea that Tesla's million-mile batteries will be in limited production in Nevada before the end of this year. Realistically, the Semi production numbers are so relatively small that Tesla could set up Semi assembly tents in Fremont, just as they previously did with the first mass-production Model 3s.
Advertisement

Two days ago when I reported explaining what Elon Musk’s announcement about Tesla Semi’s production acceleration could mean, you wrote some very interesting and valuable comments, raising some very interesting insights about the production timeline of Tesla Semi. In one of the comments, Dean McManis talks about Nikola vs Tesla and says that Tesla could set up Semi assembly tents in Fremont, just as they previously did with the first mass-production Model 3s because Tesla Semi production numbers are relatively small compared to the Model 3 and the Model Y. If Tesla was able to produce the Model 3 in a tent, it can do the Semi as well.

Dean writes saying:
I liked the idea of the Nikola Badger FCEV pickup, right up until I saw that they were opening pre-orders for the Badger in two weeks' time, but they have not even decided who the actual Badger's builder will be yet (it won't be Nikola).

Wouldn't it be ironic if Nikola used CATL's million-mile batteries?

Even though I have serious doubts about Nikola's future manufacturing and suppliers, they got a LOT of attention, and investment money are thrown their way.
Elon Musk said in his "leaked" employee letter, “It’s time to go all out and bring the Tesla Semi to volume production. It’s been in limited production so far, which has allowed us to improve many aspects of the design.” Musk continued... “Production of the battery and powertrain would take place at Giga Nevada, with most of the other work probably occurring in other states.”. In Tesla's previous announcement they said that the Semi production would be slipping to 2021.

I think that Nikola's announcement got just enough financial attention to rattle a few of Tesla's big corporate buyers, some who put down big deposits back in early 2018 for the Tesla Semi with the idea of a 2020 delivery. I suspect that (as Musk did with the Model Y) Tesla's initial plan was to announce an early 2021 delivery of the Semi (as they did) but then deliver the first production Semis early, before the end of 2020 (which is what he originally promised).

With nearly all automakers announcing virus-related production delays, I think that Tesla CEO Elon Musk wanted to shift public/investor opinion, showing a can-do approach for Tesla with this "non-announcement". And his bet paid off with Tesla's stock climbing to new highs with the announcement of the Semi truck’s production acceleration.

To me, Musk's statement that production of the battery and powertrain would take place at Giga Nevada points strongly to the idea that Tesla's million-mile batteries will be in limited production in Nevada before the end of this year. Realistically, the Semi production numbers are so relatively small that Tesla could set up Semi assembly tents in Fremont, just as they previously did with the first mass-production Model 3s. I don't really think that Elon Musk is actually concerned with Nikola's competition at all, but it still was a smart choice to "leak" the news of Tesla working hard to ship out its limited-production Semis later this year.

Now another question is the Tesla Semi and megachargers, needed to charge the Semi.

I have in the past raised questions that how can Tesla Semi be operated if we haven’t seen any megacharger built in the country or any megacharger permit announced by Tesla.

A user named “knowledge share” made a comment on this, writing “The TESLA Semi will do well initially with local, regional and specific routed longer haul corridors. Fine if it takes another 4 to 5 years to go anywhere EV big haulage usage. In the meantime, most trucks are used in a regional context and mostly on the same routes over and over so it is easy to install megachargers on those routes. In other words for most commercial clients, the technology is good to go... today.”

Regarding what type of battery Tesla may use in its Semi, Gary Carson comments saying “Tesla doesn’t have to give or share their 1 million mile battery tech with CATL. CATL has its own 1 million-mile LFP battery that could be used for the Semi. Tesla seems to have developed its own higher energy density million-mile battery that could also be used for the Semi depending on production quantities and timeframe. Because the CATL batteries are lower density, they will need more space for the same range. There may be enough space in the 300-mile Tesla Semi to be able to use the CATL batteries so that Tesla can speed up the delivery date of the Semi in order to ward off competitors. Later when Tesla has had time to ramp up production of their higher density million-mile battery to satisfy the Cybertruck demand, they can start shipping the 500-mile Semi using their higher density batteries.”

Regarding the delay of the Tesla Semi truck, one of Torque News subscribers, named zezizarjaars, writes saying “I think that the mass production of Tesla Semi could have been done earlier, but then they would sell less Tesla Model 3s. The amount of batteries they have is still the limiting factor.

If you have 1 MWh of batteries you can make 13 Tesla model 3s (worth 650k dollars), or you can make 1 Tesla Semi truck (worth 200k). So, the choice could be easy and that makes Tesla Model 3s. Now somehow that slows down because there aren't that many people at this moment who still got big pockets.”

Let me know what you think about the Tesla Semi's production in a tent, megachargers and the possible production time frame.