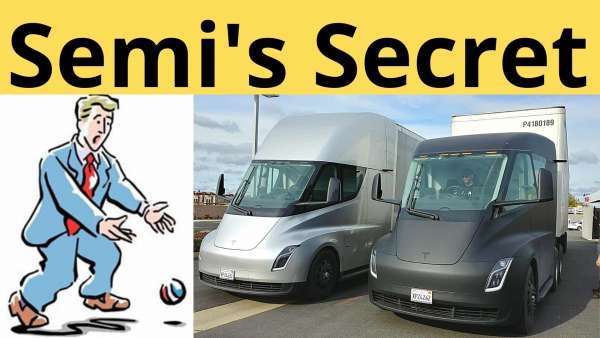 Is Tesla Just Trying To Show It's Not Dropping The Ball With Semi?

Elon Musk's Tesla Semi is battery ready or Tesla wants to show it has not dropped the ball with the Semi?

Several days ago we learned that Tesla,plans to start production on its Tesla Semi electric truck soon. It was after the leak of an email from the CEO to his employees that the news spread.

Torque News contributor Dean McManis says I don't really think that the Semi production announcement means anything except for the fact that with Nikola's recent stock offering, and Rivian moving forward with building Amazon delivery trucks, Tesla really needs to appear that they have not dropped the ball with the Semi.

Remember that the Tesla Semi concept was first shown in late 2017, and deposits and pre-orders were made, with the delivery slated for later this year. Even though battery production constraints were seen with the Model 3, we are talking about 93,000 cars in 2019. Whereas even if the Semi used the Model 3's Panasonic 2170 batteries, it would only require 2X-3X the batteries needed for a single Model 3 in a Tesla Semi, and there are only around 2-3,000 Semi preorders.

And if the Semi production does mean that Tesla is going to showcase their new (U.S.) Million Mile batteries, and they need to build a new battery production line (which I think has already been built in Nevada) then the Semi's battery requirements will be relatively small, because even though each Semi will need batteries for their 120-200kW battery pack, they only need to make 2-3,000 Semi battery packs in total. Could CATL be providing Tesla with the MM batteries needed in the Semi? Yes they could, but I don't think so. I don't see Tesla giving their MM patents away to CATL.

Tesla-Funded Research Reveals One of The Biggest Mysteries of EV Battery
Tesla Tesla Buyer Nets a Whopping $12,000 Discount After Asking for Reduction
END_OF_DOCUMENT_TOKEN_TO_BE_REPLACED