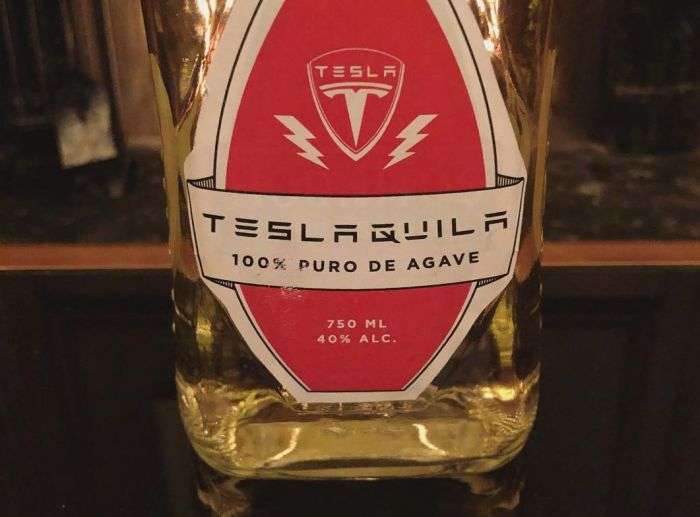 On April Foul's day when Tesla CEO made a joke about Tesla's bankruptcy he posted a picture surrounded by bottles of a booze called Teslaquila. Apparently Teslaquila is going to be the next product of Tesla. Here is the image of Teslaquila shared by Elon on his Instagram account.
Advertisement

When Musk shared the this Teslaquila bottle on Instagram people started asking if this is just a bottle for personal use or available in the market. We don't know, but the news about a Tesla-branded alcoholic drink was received with excitement by Tesla followers.

Perhaps Teslaquila will soon be offered as a Tesla merchandise. It may be really happening soon.

Does anyone remember the SpaceX wine? Tesla has a tradition of releasing Musk-inspired beverage.

Two years ago, when SpaceX successfully launched the CRS-8, Elon Musk released the SpaceX wine. It was a seasonal wine, meant only for the holiday season with a message on the wine wishing "many happy returns." Teslarai has an image of SpaceX Wine in its coverage of Teslaquila.

But let's get back to Teslaquila.

Judging from the bottle of Teslaquila, shared by Musk on his Instagram, Teslaquila contains the standard %40 alcohol. It will come in 750ml dose giving tesla funs a number of Tequila shots.

We also see on the bottle the "100% Puro De Agave," message. "For aficionados, the most important identifier on the label of a tequila bottle is '100% agave' or '100% agave azul' - cien por ciento de agave azul. This means it is made only from the blue agave plant, with only agave sugars used for fermentation, and was approved by a government inspector to ensure purity," explains Ian Chadwick.

Looks like Teslaquila is being received with a great sense of excitement by Tesla fans, as you can see from the hashtag Teslaquila. Some people say it's going to be their next new drink, others ask when Tesla will take preorders, just like it successfully takes preorders for Tesla Model 3.

Perhaps Tesla now can raise a ton of money by selling Teslaquila.

Thus, the April Foul's day twitter post by Elon, wasn't only a prank, it was the first marketing introduction of Teslaquila. He turned April Fool’s booze into the real thing. Did anybody doubt it?

We will write more about Teslaquila when we taste it first, but remember folks, don't drink and rive.