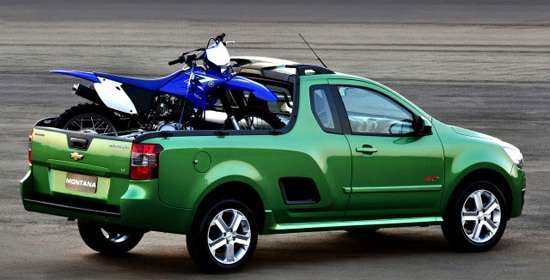 Sources Say Chevy Will Bring Small Compact Pickup to the US - the LUV returns?

There has been talk for years about bringing back a "true" compact truck, ala the 1970s-80s size, back to the U.S. market. For many truck buyers, the new pickups have grown too large and too powerful for their needs. Many think a Chevy LUV type vehicle may do very well. Apparently, GM does too and may be seriously considering bringing one to the market.
Advertisement

At a recent press event, a Jalopink journalist finally beat down several GM engineers into suggesting they are working on a “new LUV project.” This off-the-record conversation could just be a reference to a test mule, yet a truly compact truck does have it’s merits.

The speculation since the article has appeared is that GM will import or build the Latin American Chevy Montana. The Brazilian built compact truck is pretty much just an updated Chevy LUV. The LUV was sold in the U.S. from 1972-1981 when it was replaced by the larger S-10. (FYI - LUV stands for light utility vehicle)

For those curious, the Chevy Montana is powered by a 1.4L 4-cylinder with a 5-speed manual transmission. And while this is plenty for that market, it is likely that GM will need to increase the size of the 4-cylinder as well as put their 6-speed transmission from the next-generation Chevy Colorado. In many ways, it may just be a smaller Chevy Colorado with the same engine and transmission.

Pros to the LUV

Bringing the Chevy LUV back could pay lots of dividends for GM’s truck strategy. They currently talk a lot about offering a product for every customer’s needs. This multi-prong truck strategy is really just PR speak, yet from a business perspective, it is great to offer every customer a vehicle to fit their needs.

Another pro to offering the LUV is that nobody else offers a product in that segment. This would give GM a leg up on creating a product unlike anything anybody else offers. Remember that the Toyota Prius did this years ago and it worked out pretty well for them.

While nobody really knows what the demand maybe for a compact truck, there is one customer who benefit from such a size – fleet buyers. Yes, there are those fleet buyers who need a HD model, there are lots that don’t. Consider the case of Orkin. The pesticide company uses thousands of trucks each day and these used to be Ford Rangers. When Ford discontinued the Ranger thinking that customers would simply buy the F150, Orkin didn’t. They bought the Tacoma instead. Why? Their employees could more easily drive it and the access to the bed was better than the F150. A smaller compact truck than the Tacoma would be an even better fit for Orkin and similar customers.

Also, it could appeal to the Gen Y buyers who have so far not bought as many new vehicles that previous generations have. This segment has been a hot topic for automakers and is the primary reason Scion has considered a compact truck from time to time.

Lastly and maybe most importantly, a compact truck would fit nicely in GM’s lineup with the pending CAFE requirement. A truck of this size should have outstanding fuel economy with its small footprint – a CAFE dream product.

Cons to the LUV

Of course, one of the biggest problems with building a LUV is turning a profit. These small trucks like compact cars simply don’t have much profit. The larger full-size trucks do and this is one of the reasons why the smaller trucks vanished. If Chevy builds the LUV and it sits on dealer’s lots, GM may have to sell it at cost or for a slight loss (see: Pontiac Aztek).

Plus, the LUV may not have any other compact truck competition; it would compete with GM’s mid-size offerings on the same lot. Competition is great in most cases, yet competing against yourself isn’t so ideal.

The reality is that bringing this size of vehicle to the market is full of risk. Yet, this “new GM” doesn’t seem to be averse to risk. GM's Mark Reuss, Executive Vice President, Global Product Development, Purchasing and Supply Chain, recently said as much in an Automobile Magazine. He points out that critics said GM couldn't sell the Chevy Spark and the Buick Encore in the U.S. Yet, both products are selling really well and Chevy is having some difficulty keeping up with the demand for the Spark, according to Reuss.

"I love doing things that make sense, that no one else is doing," said Reuss.

With Reuss a big part of the executive team, GM may have the people in place that will push for this truck to come to the U.S.

What do you think? Is GM seriously considering a LUV remake?