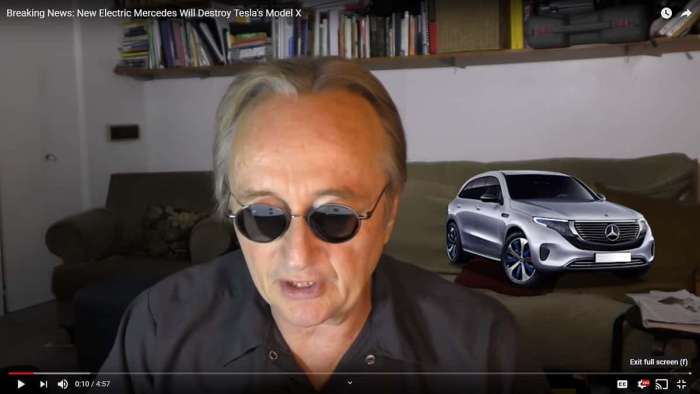 In today's video report a Houston based car mechanic and a Youtuber Scotty Kilmer spoke about Mercedes EQC electric SUV's reliability, price and compared it to Tesla. Although he didn't mention the Model X by name, but he titled his video (see below): New Electric Mercedes Will Destroy Tesla's Model X. Here is what he has to say about Mercedes EQC SUB and the gas version Mercedes SUV.
Advertisement

What do you think of the new Mercedes EQC electric car. Will it be more reliable than gas Mercedes?

EVs are much simpler vehicles than gas cars. If they are made correctly, yeah they are pretty dependable cars. There is no argument.

Now, I am saying they have to be built correctly because those things are using high voltage: 200 volt up. And if electric cars are not made right they can melt, start on fire like some of those Tesla's did, but if they're made right, yeah, they can be, you know, reliable cars.

Mercedes EQC May Have an Astronomical Price

Now, EQC being a Mercedes I am sure the prices are gonna be astronomical. You see, Volvo got bought by the Chinese then they said they're only going to make hybrid and electric cars in the future.

Hey, those guys are going to undercut the prices of everybody else.

I wouldn't buy an electric car now anyway because I don't think the infrastructure is there, but as time goes on I imagine people are probably going to drive it around and a lot of Chinese electric cars.

Watch4 Pictures From Inside Tesla's China Gigafactory 3 in Shanghai and Subscribe to Torque News Youtube Channel for Tesla Mercedes and Daily Auto News.

See you in the next story where Scotty Kilmer is discussing the price and value of the rare 2013 Shelby GT500.

DeanMcManis wrote on June 23, 2019 - 1:31pm Permalink
Well this guy seems more interested in news bites than facts with some of his info. It's clear that he has a good understanding of cars in general, but he talks with the same certainty about what he knows, as he does internet gossup. Regarding the Mercedes EQC, it will most likely be a fine automobile. And being electric it's drivetrain is far simpler than a conventional gas or diesel engine. The EQC will be priced liked the other European luxury SUVs. Definitely pricey, but not exactly astronomical. The only part of the news bite that I have a problem with is Mr. Kilmer's statement implying that Tesla's cannot compete because they are built poorly and catch fire, which is where he reveals that he accepts internet gossup instead of facts, and passes on lies without questioning them. The latest batch of European luxury BEV SUVs can compete just fine on their own merit without such tactics.
chrisP wrote on March 24, 2021 - 2:59pm Permalink
Thank you Dean. My thoughts exactly. Where do they find these people? I'm new to this site but not encouraged by the editorializing that I have seen thus far.