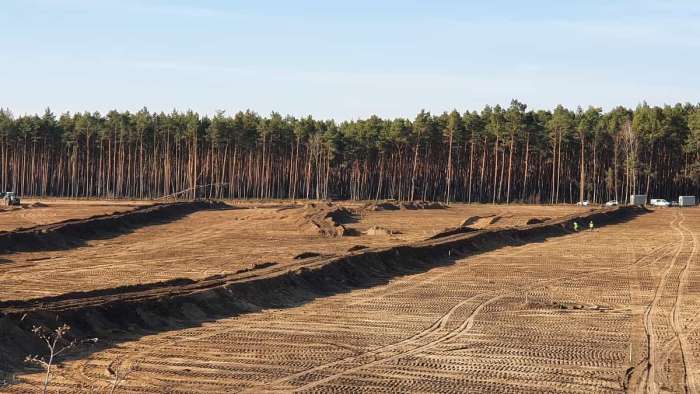 Today Torque News has some amazing news updates from the Tesla Giga Berlin showing how the work continues under high pressure. It's fast and Tesla is actively building it's Gigafactory 4 in Grunheide, outside of Berlin.
Advertisement

Tesla has also been caught in the vortex of the current difficult situation. The production at the Fremont parent plant and at the Solar Gigafactory in New York had to be reduced to minimal operation, and CEO Elon Musk currently seems to be dealing intensively with ventilators, which is very important. The Tesla team sent from the USA for the construction of the Gigafactory in Grünheide (Giga Berlin) also had to be withdrawn - but according to local observers, the work there is still progressing at a rapid pace.

In February of 2020 Tesla had received prior approval to clear 90 hectares of pine on the site in the Brandenburg municipality of Grünheide and completed this work within a few days - despite interruptions by courts and protests. At the beginning of March, another early partial approval for leveling the cleared area followed, on which a new Gigafactory Model Y for Europe is to be produced as early as July 2021. The actual approval process for the factory, including citizen participation, has not yet been completed - also because a discussion date for this had to be canceled due to the current difficult and uncertain time.

But Tesla doesn't seem to waste any time when leveling. Since the second approval, observers have reported intensive work with many heavy machines on the Gigafactory site every day, sometimes even on weekends. According to a count by Jurgen, who tweets at @GF4Tesla on Twitter, there were 12 excavators, 6 bulldozers, 15 tractors, 10 shredders and many rollers on this Thursday alone. According to him, the work is being carried out “under high pressure.”

Next partial release for Tesla soon?

In fact, the area that was forested just a few weeks ago is increasingly becoming a recognizable construction site. Images by Jurgen show a large, cleanly leveled brown area that has been cleared of tree debris; some small areas are fenced with low green strips, probably to protect forest ants. Some trees that were not cut because bats were suspected to live on them, have also been felled.In this respect, the next partial approval for Tesla will soon be required.

According to the Brandenburg State Office for the Environment at the beginning of March, only the removal of the topsoil and the leveling of the site were allowed. This work now seems to be coming to an end. At first, there was no clear information on how far work in Grünheide could be advanced in such steps before final approval. Until then, Tesla acts at its own risk, so if the project failed, you would have to restore the previous state.