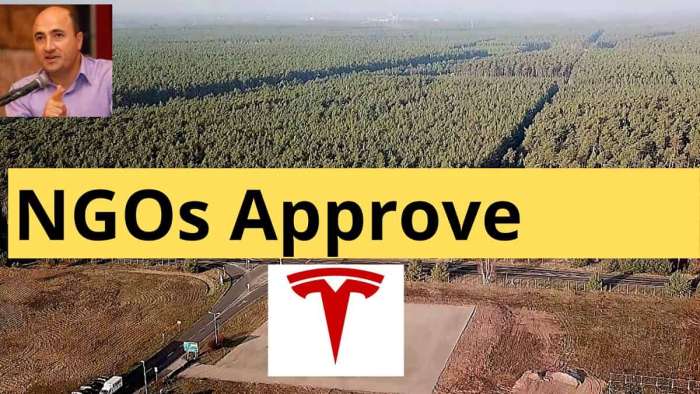 The Brandenburg environmental associations approve the construction of the Tesla Gigafactory in Brandenburg and make no fundamental complaint. This is an important development that not many people expected such a green light for Giga Berlin from a group of local environmental agencies. What does this mean for Tesla?
Advertisement

Tesla’s Gigafactory 4 construction progress near Grünheide is becoming more visible and significant. The deadline for objection to the factory of the American electric vehicle manufacturer Tesla in Gruenheide near Berlin expires today at midnight. Prior to this, citizens, environmental associations, or civic initiatives could review project documents and criticize plans. And then, all of a sudden several environmental groups approved Tesla’s Giga Berlin construction.

We saw two weeks ago a court order to halt Tesla’s work in Giga Berlin because of two environmental group protests. Then for several days, there was no work. Then Tesla was cleared to continue to the work. But in people’s mind, the thought was that the environmental agencies are against Tesla in Germany. However, that’s far from the truth.

Today the Environmental Agencies of Brandenburg endorsed the construction of Gigafactory 4 and make no solid claim to Tesla. The Business Insider reported that BUND, Nabu, Green League, NaturFreunde, SDW and VCD made a statement:

Here is what that NGO statement on Tesla and Giga Berlin says.

“According to the state government, the planned Tesla plant should provide important economic impulses for Brandenburg and Berlin. Such construction and infrastructure projects are not fundamentally challenged by environmental associations.”

So this group of environmental agencies endorsed the construction of Giga Berlin factory, but are unhappy with the planning process that the state government deals with. They would like the state government to provide more advance notice and enable citizens to participate more. Please, listen carefully because in my closing argument I am going to explain what this approval means and what it doesn’t.

In addition, the associations criticized the construction of another highway access and exit (A10) and the associated deforestation, the expansion of the L38 on the project site, the clearing as part of the replacement measures, the road construction from the train station to the motorway (A10) and all water law proceedings.

For example, regarding the water law proceedings, the agencies are concerned that the water, which Tesla will use at Giga Berlin, is calculated only for the phase 1, but when Tesla adds phase 2 and phase 3 (which will come in years) the agencies say they don’t know how much water Tesla will need and where this water will come from.

"These points show that there is an enormous backlog in the planning process, and above all that these open questions have to be answered," said BUND Brandenburg Managing Director Axel Kruschat. "Our statement was also drawn up at short notice and requires thorough reworking," says Kruschat.

He admitted that the environmental associations first had to resolve internal disputes because there were numerous members in the organizations who fundamentally rejected the Gigafactory project.

From summer 2021, Tesla electric cars are to be manufactured in Grünheide near Berlin. The approval process is still ongoing. Critics of the billion-euro project were able to speak up, their concerns are now being examined.

Critics of the factory in Grünheide near Berlin planned by Tesla have had objections to this since the beginning of the year. The deadline ended on today, March 5, at 11:59 p.m.

So far, 270 objections have been received, 14 of them from institutions such as associations or clubs, said Frauke Zelt, spokeswoman for the Environment Ministry. A total of 300 is expected. Experience has shown that there have been still large numbers of submissions in the past few hours and minutes.

Tesla's environmental impact report was available in the municipality of Grünheide (Mark), the city of Erkner and the Amt Spreenhagen as well as in the State Office for the Environment at the Frankfurt (Oder) location. It had also been published on the Internet.

So the environmental agencies approved the Gigafactory’s construction but complain that the overall planning documents remained too vague in many places. They say these documents need to be legally correctly planned and comprehensively considered right from the start, also in order to achieve a high level of acceptance among the population. Many questions are unanswered by the enormous time pressure, such as water supply and disposal for the factory or the infrastructure, is emphasized.

Citizens who reported at the last minute should not have to worry that their information on the environmental impact report will not be followed, the spokeswoman for the Ministry of Environment emphasized. According to her, the objections are now being viewed and arranged thematically in preparation for the discussion on March 18 in Erkner. However, only the citizens and associations have the right to speak who have been registered according to the law.

Then the Giga Berlin groundbreaking is expected by the end of the month. However, an appointment is not yet known. The final permits should then be available in the summer. Until then, Tesla acts at your own risk. Starting in the middle of next year, the company plans to build 500,000 Model 3 and Y electric vehicles and future models annually.

What does this environmental group approval of Tesla Gigafactory mean? To be clear these are natural conservationist associations (NGO) and this has nothing to do with the decision in politics nor the general approval of the Giga Berlin! It just means there will be less protest against or lawsuits by these very big and powerful environmental agencies.

Giga Berlin's expansion will bring about 12,000 jobs. Giga Berlin will also have huge impact on the German automotive sector.

See you in my next story where I show Tesla doing dynamic compaction at the Giga Berlin site under bad weather.