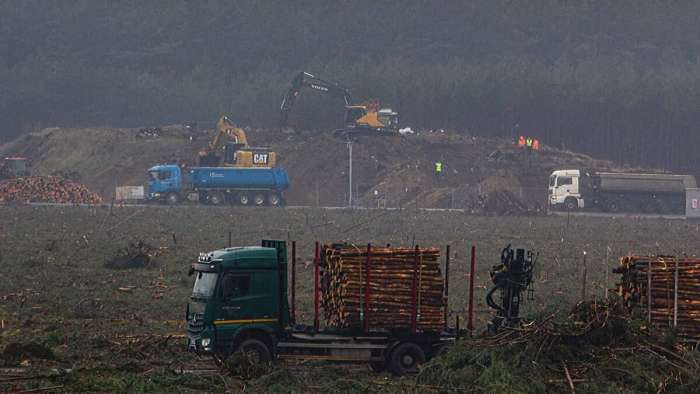 This is the latest news update from Tesla Giga Berlin. Some of you know that two days ago a heavy crane was brought in to start a different type of work, other than clearing the forest that was happening before. Yesterday the crane was being set up and raised and many of us were wondering what type of work this crane will start in this phase of preparing for Tesla’s Giga Berlin factory construction. The crane is compressing the ground. But what does this mean?
Advertisement

Today my local friends are telling me that the weather conditions in Grunheide are very bad. It’s heavily raining with 42 F. At about 7 PM the sun is expected to come out for an hour and then it will continue to rain. Tesla’s Arikon contractor is working very hard to prepare the construction site for the Giga Berlin’s groundbreaking, which may happen with the next three weeks by the end of March.

Now in this rainy weather, I thank our twitter friends who did their best to get to the construction site to update us about Tesla factory’s production process. In these images you are seeing the view of the Giga Berlin into the far distance, Tesla crane using heavy weight to compress and analyze the ground, the crane from the southeast and the removal of rubble mountain.

If you have seen previous pictures from our reports, you have noticed a rubble mountain in the middle of Giga Berlin’s flat ground. At first, I have been wondering myself, what is this mountain for? I knew it was rubble, but why did Tesla leave it there? Now I understand. It’s just gathered there in one place, and then Tesla will remove it from there, which is apparently happening today.

To understand everything that is happening at Tesla Giga Berlin today, you need to know one thing about Brandenburg’s soil.

The Brandenburg soil is very sandy.

1. View into the far distance
2. Heavy weight to compress the ground
3. Crane from southeast
4. Removement of rubble mountain pic.twitter.com/DAK9sDMqB5

What is Ground Compaction and Why Is Tesla Doing It?

The ground is compressible if a building, or other applied load, causes the water in the pore space to be squeezed out, causing the ground to decrease in thickness. 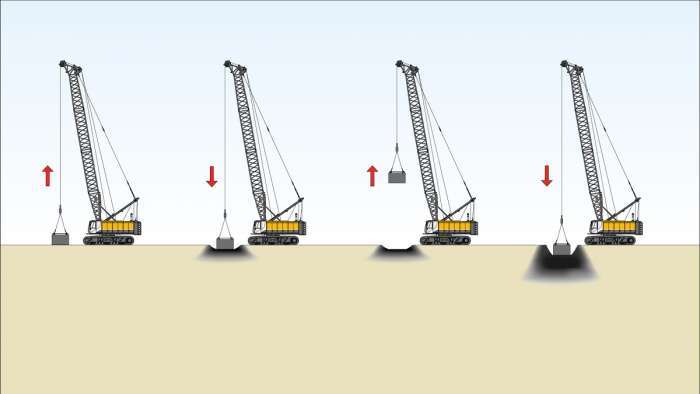 In my neighborhood, there are new developments and I see that one of the first things the developers do is to compress the ground with special heavy equipment so the structure sits well on the ground. This work needs to be done with great care at the Giga Berlin factory’s construction zone as the Brandenburg soil is sandy.

As you can see, every day something exciting is happening at Tesla Giga Berlin’s construction site.

Yesterday we learned that the drone flight ban over the construction site was lifted. That was welcome news as we will probably be able to bring you more drone videos thanks to our friends who tweet daily from Grunheide.

Also, yesterday we learned that Brandenburg associations provided 32 pages of objections to Tesla Gigafactory. They actually approved it, but if you look at the document, there are more objections than approval.

Speaking of objections. Yesterday was the deadline for the public to send its objections against Tesla Giga Berlin’s factory construction. About 270 objections were received by the local government agency. The State Office for the Environment (LfU) Brandenburg has set March 18 for hearing. The public event is to take place at 10:00 AM in the Erkner town hall. If everything goes smoothly, Tesla should acquire the building permit for the Gigafactory 4 and the groundbreaking should follow. Elon Musk has tweeted that he will “definitely” attend the Giga Berlin’s groundbreaking.

Giga Berlin is going to have a huge positive impact not only by providing nearly 12,000 local jobs, but also a huge impact on the German car sector. It will also increase the popularity of Tesla vehicles in Germany as currently German EV sales are rising and Tesla doesn’t have many parts in it. Tesla car sales in Germany and Europe only pick up in the last month of the quarter, which I will explain in my next report. Look forward to it, please.