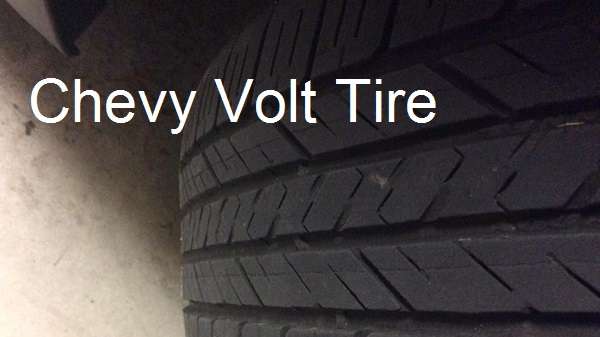 Some Chevy Volt owners get some very serious mileage on factory tires and brakes before replacing them because of the regenerative braking. Chevrolet Volt has two electric motors. The second smaller motor spins backwards when you let off the accelerator and/or hit the brakes, providing resistance. The energy from the second motor spinning is fed to the battery. If more deceleration is needed and you hit the brakes harder, the disc brakes will also kick in

I'm at 50,000 and still going. No new brakes and original tires, writes Knarf Tank in the group.

Anthony Lee writes that he has 36,000 miles on his Chevy Volt, "but I waited too long to rotate them. A week after rotating, I got a nail in the right rear, which had been on the front. Tire shop wouldn't patch it, said they were too far gone. So, I plugged it myself and drove another week before just replacing them all. (From a different tire shop) FWIW, the orignal rear tire had hardly any wear on them," he adds.

We changed our tires out at close to 50,000 miles. Brakes still look like new. Now close to 83,000 miles, writes Clayton Baker. In fact, some people say keep tires at max inflation and get over 50,000 miles.

Rich Crecelius
I had to replace tires at 62,000 miles and brakes are still good.

Javier Giraldez
On my Chevy Volt I have 42000 miles, same tires, no brakes changes. Just flush it. 4 years now.

Jeff Sturm
30,000 miles and my service has been limited to two tire rotations and one oil change. Should get new wiper blades though, it's time. Brakes and tires are doing great. Strangely enough my LEAF just had to get the parking brakes serviced. But that had nothing to do with wear, it was a component failure.

Mark Renburke
65,000 miles and that was after a winter. Tread was still decent enough to get me through NE winter commutes, though the last winter traction was waning. What I really should do is swap to snow tires every late fall...but I love the kWh/mi the OEMs deliver! Over 97,000 miles on original brakes, still look good.

GregSS wrote on July 12, 2016 - 1:00pm Permalink
Not sure what is so impressive, my F150 went 60,000 on the original tires and front brakes lasted until 90,000.
gregdn wrote on July 12, 2016 - 4:09pm Permalink
GregSS, I also don't know why they brought tires in to the discussion. that has everything to do with the tire and your driving habits. However, the impressive thing about the brakes is that while you made it 90,000miles and needed a brake job, people have over 100,000 miles, one guy has over 200,000 miles, and there are no signs of any brake wear. At some point you'll want to flush the lines, but depending on how you drive the OEM pads and rotors may last the life of the vehicle.
Thomas Ophardt wrote on July 12, 2016 - 6:51pm Permalink
My Volt just turned 62,000 miles and I still have the original factory tires. But they will need to be replaced before the next Winter sets in. The front brakes needed to be replaced at 45,000 miles.
mike w wrote on July 27, 2016 - 8:27pm Permalink
Wow I am really delighted to see that so many people are getting such long service life from their tires and brake pads. We just picked up a 2016 Volt 6 months ago. We had a 2011 Leaf and the front tires were replaced at 11,000 miles while the tires on the back looked brand new. I do admit I'm not a big fan of tire rotation. With the Volt I use the regen pedal a lot. While washing the car I see NO brake dust on the wheels so I'm thinking I'll never have to do a brake job on that car.
Tom Hendren wrote on August 19, 2016 - 5:17pm Permalink
I drove a 2001 Prius 135K miles and the brakes were above 60%. Battery died and killed the transmission, cooler pump and more. Original tires lasted only 20K. Different tires lasted 65K. My 2013 Volt (now 47K miles) had to replace tires at 33K miles as tire wear was bad on the outsides. Always kept inflation to 42psi, even the new tires. Old tires got great electric miles, up to 47 Emiles per charge. Changed tires to more aggressive LRR and am getting 38 Emiles now. Tires are warrantied to 60K and appear to be wearing flat. Lower mileage is OK as tires are expensive to replace and cost more than Emiles saved. Only car problem is both drive shafts have been replaced. Glad I bought the 100K all inclusive warranty. Brakes estimated to be on a +200K mile wear schedule while using the regen braking as I do. I drive in L mostly and use it to slow down (regen) often. Probably irritate those behind me. Note the new tires are Bridgestone Serenity plus. 65K warranty, great traction, stopping and cornering but Emiles are reduced. Still get 38 on long trips though.
Moses Trevizo wrote on October 23, 2018 - 8:26pm Permalink
I just hit 65,000 on my 2017 volt LT, YES, I bought the car in Phoenix with 26 miles on it back in May of 2016. I still have the original Michelin Energy Saver tires on it and could probably take it a few thousand more, but since we are entering the rainy season here in Oregon I am considering changing the tires soon. Dealer says the brakes appear to have minimal wear, look like new so no problem there. I really can't believe the Low rolling resistance tires lasted this long. I expected them to last about 35-45k miles. To the guy in the ford p/u post: I don't think he understands the difference between standard tires and LRR tires. These tires are designed completely differently, and they are what help me get as much as 72 miles on a charge, although I average about 63 Emiles here in Portland. It really depends on how you drive it, it seems to last longer when it's warmer. Might I add that the majority of these miles are highway driven and even peeling out several times in sport mode. I never rotated my tires, so the rear tires have a bit more tread on them then the front tires, but then again, 65k and still have some tread left, I'm not one to complain. This is a great tire, a little on the noisy side, but it's tolerable. BTW, these tires come with a 65k warranty. I have had no mechanical issues with this car yet, and hopefully will not have any in the future. The car still drives straight, as if it is perfectly aligned, even after 65k miles.