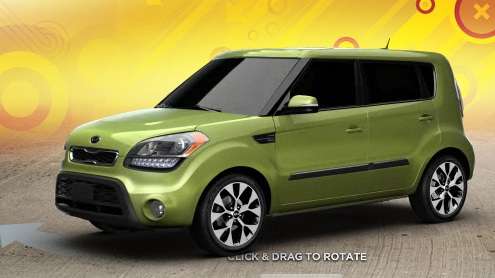 Kia Soul 2012 to have HD Radio, company explains why

Kia decided to build on the success of its Soul's strong launch and the refreshing design. The company announced the 2012 Kia Soul will come with HD Radio. The 2012 model will be launched soon.

The 2012 Soul will be the fourth car in the auto maker's family that will offer HD Radio Technology. The previous three car models are Kia Optima, Kia Sorento and Kia Sportage.

"Automakers are continuing to embrace HD Radio Technology at a rapid pace, offering consumers a variety of new and exciting stations in crystal-clear digital sound, including on-screen information that displays song titles and artist names," writes Steve Baldacci who is Senior VP Marketing at iBiquity Digital Corporation. With the growth of HD Radio popularity iTunes Tagging feature is also continuing its rapid adoption with other automakers. Scion, Subaru and Ford are among the first car makers offering iTunes Tagging feature. Lexus and Toyota have said all of their radios with HD Radio Technology will also include the iTunes features.

HD Radio is already present in more than 2,000 stations. More than one thousand digital music channels send signals and exciting programming in HD quality. Today, there are over 2,000 AM & FM stations broadcasting with HD Radio Technology with more than 1,300 additional digital only FM HD2/HD3/HD4 multicast channels sending new exciting programming.

Kia drivers should be able to experience the HD Radio Technology in the 2012 Kia Soul in their local dealerships nationwide.