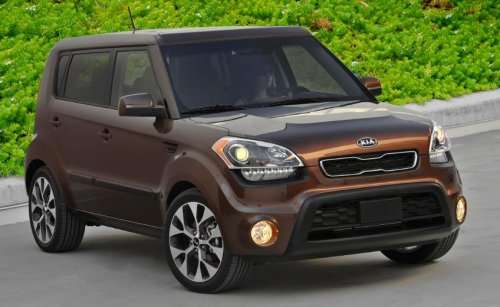 Ever since the Kia Soul and Nissan Cube began competing in 2008 with the Scion xB (which had a few years on them in North America), the ubiquitous urban utility vehicle (we’ll suggest U2V) has been hard to escape. They’re on the road, on the television and even the hamsters have taken a liking to them.
Advertisement

Those Kia ads were even picked as the best auto commercial by the Nielsen Company at NYIAS for two years running.

The 2012 Kia Soul model will come to market this summer with a new a new 1.6-liter four-cylinder GDI engine running 135-horses linked to a six-speed stick shift in pursuit of greater fuel economy. Though the EPA has not confirmed it yet, Kia claims the new engine will deliver a combined mileage rating of 31-mpg.

An optional 160-horsepower 2.0-liter four-cylinder engine will be available with either a six-speed manual or automatic transmission. Kia expects the more powerful 2.0-liter engine to still get a combined mileage of 30 mpg.

Mileage of the 2012 Kia Soul was a much talked about factor at the 2011 New York International Auto Show as a national average price of $3.84 per gallon was reported yesterday.

The were only subtle changes in the 2012 Soul's exterior including new projector headlights and LED running lights, a new hood design plus new bumpers front and rear.

"The overall shape of the vehicle was finessed to give Soul a smoother and more streamlined silhouette," stated promotional materials.

Two shades of paint were added as well, namely Canyon and Moss – also likely to ring a bell with the hamster coalition.

Other changes to the 2012 model include an Infinity premium audio system, and Kia's UVO interconnectivity system on the Soul! and Sport trims. The optional premium package adds heated leather front seats, navigation, and a push-button starter. Every Soul features air conditioning, power windows, locks and mirrors plus Sirius-ready radios.

Kia expects to hold the price line of the 2012 Kia Soul under $14K and expects to offer special editions throughout the model year.