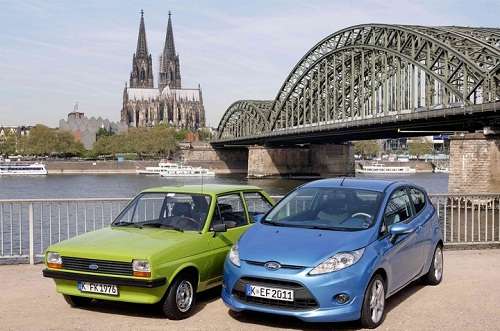 Ford NZ today shared a very interesting note displaying the timeline of Ford Fiesta during the past 35 years.
Advertisement

Ford Fiesta, the starting MSRP of which is 13,200, started its production 35 years ago in Valencia, Spain. Nearly 15 million Fiestacars have been produced across the planet, six generations of it made in Europe. Ford still gives minor updates to the car as the sales are still going strong.

The company probably could have not predicted the phenomenal success for its Fiestas when it launched the car in 1976. It had a striking appearance and the success is still unfolding after more than three decades.

While the production began in 1976, the legacy goes back even further. The following timeline offers a glimpse into the Fiesta’s rich history. The timeline is posted on Ford NZ's Facebook pate.*

1972
Fiesta conceived as secret Project Bobcat to create a new Ford small car for the world, a mission close to the heart of Ford Chairman Henry Ford II. Work begins in Europe and America to develop the new small car, ranging from its mechanical architecture and design elements to market positioning

1975
Engine production begins at Valencia. Fiesta name chosen personally by Henry Ford II for its alliteration with Ford, its spirit and its celebration of Ford’s new connection with Spain

1977
Ford introduces larger displacement 1.3-litre version of the Fiesta including sporty new S model and a Ghia version. Export of Fiesta models for the US market begins. Fiesta named Spain’s Car of the Year

1982
Fiesta is best-selling car in its class in Britain and Germany for six years running. Ghia introduces Fiesta-based Shuttler Concept

1983
Aerodynamic new Fiesta MkII introduced. This new model was longer and more fuel efficient, available in 1.0-litre and 1.1-litre. 1.3-litre model launched with a fifth gear. Fiesta 1.6-litre diesel introduced. This overhead-cam, indirect injection engine would become a mainstay of the Ford line-up for more than a decade

1989
Fiesta MkIII launched with anti-lock brakes and lean-burn engines, in 1.0-litre and 1.1-litre versions. New Fiesta featured a longer and wider body shape and an increased wheelbase. It was available for the first time as a five-door model, augmenting the venerable three-door shape
Fiesta is first small car with ABS
In Cologne, the new Fiesta became the work of art as the Goldener Vogel (“golden bird”) atop the tower of a city museum, the creation of action artist H. A. Schult. The small car with the powerful eagle wings would become a favourite of the Cologners and popular sight for tourists
New trim level LX joins range between Fiesta L and Fiesta Ghia
Fiesta MkIII adds 1.4-litre – the first Ford engine to meet pending European emissions standards due to take effect in 1996 – and 1.6-litre engine options
Fiesta XR2i joins the range later in the year with new 1.6-litre twin cam engine and 5-speed gearbox as the range’s hot hatch. The XR2i featured flared wheel arches, body-colour bumpers and unique trim, plus unique suspension and tyres

1990
Introduction of Fiesta RS Turbo at Turin Motor Show. Using the XR2i engine with an intercooled Garrett turbocharger, the Fiesta RS Turbo was 1.6 seconds quicker than XR2i to 100km/h (62mph)

1994
Fiesta tops a half-million units with calendar year registrations of 548,046

1998
Libre Concept based on Fiesta

2006
Fiesta launched with voice activation and Bluetooth
The Fiesta Sporting Trophy, a new Ford rally one-make championship based around the FIA World Rally Championship, is launched