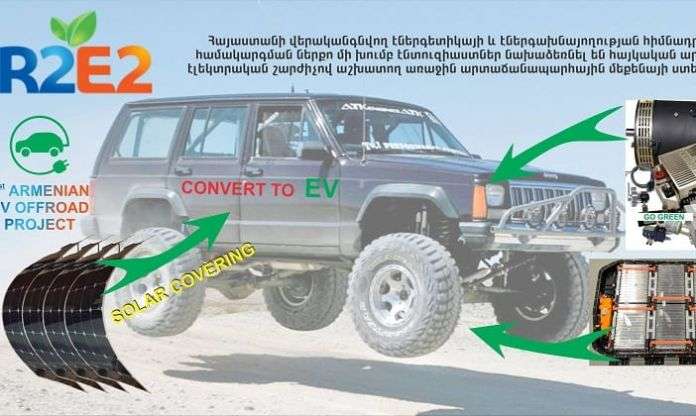 Armenia has already transformed all its gas-powered cars to run with natural gas, but now the country is working on a solar car offroad project, based on Jeep Cherokee SUV to not only bring solar car to production, but to convert any current ICE car with an electric engine.
Advertisement

Imagine if you can convert any car with an electric engine and let it run through solar power. This is exactly what a group of enthusiasts are working on in Armenia with the active support from the country's Department of Energy.

So far this is a volunteer and enthusiast-driven program. But it was a program like that, which years ago started and replaced virtually every car in Armenia to run on a natural gas because Armenia doesn't have oil resources. Natural gas is cheaper and it has helped the country's economy tremendously.

The Solar Car Project Based on Jeep Cherokee

In November of 2017 Hayk Harutyunyan, Armenia's deputy minister of energy infrastructures and natural resources, shared on his Facebook page a notice about a competition from Armenia Renewable Resources and Energy Efficiency Fund - R2E2 that would aim to design the first solar car in Armenia based on Jeep Cherokee.

The competition had several conditions (PDF in Armenian). It had to be based on Jeep Charokee. It had to look like Jeep Cherokee but take into consideration the mountainous terrain and climate of Armenia. It had to be have electrical engine visibility. Solar panels had to be visible on the car with aesthetic design. The project had to be detailed in 10 pages. The deadline was December 14.

We Hope That Solar Electric Cars Will Become Common in Armenia

Now, Mr. Harutyunyan tells Armenian's leading news agency Armenpress that the group of enthusiasts has already met and divided the first meeting with the interested parties in two parts. "The first one is to design and build a solar car from zero, and the second one is to make any old car into a vehicle with electric engine. We want to show that the current cars can be replaced by electric engines and later we hope that it will become a common practice in Armenian," Harutyunyan said to Armenpress.

By the way, Armenia is making advances in solar power and solar energy. Yesterday Torque News reported that the Armenian government and Tesla are negotiating and starting a pilot program to store excess solar energy produced in Armenia. It is not surprising to see competitions and ideas like this to become common in Armenia to transform the country's fleet. Schools like TUMO, AIB and the National Polytechnic University of Armenia supply the necessary talent for projects like this.

World's leading car companies, which are engaged in EV production find their main engineers and employees from enthusiast groups like this. Australian universities hold solar challenge competition for already 30 years.

"We also want to create as similar vehicle here in Armenian with the hope that we will create a certain interest among the specialist. They will work on this path with a dream that a production of solar electric car will best set up in Armenia," said Harutyunyan.

If you are en enthusiast in the field, when do you think solar cars will be common in our roads? Please share your opinion in the comments section below. If you liked this article and think it may help your friends, consider sharing or tweeting it to your followers. Also see: Whatever Happened To That Compressed Air Car Anyway.