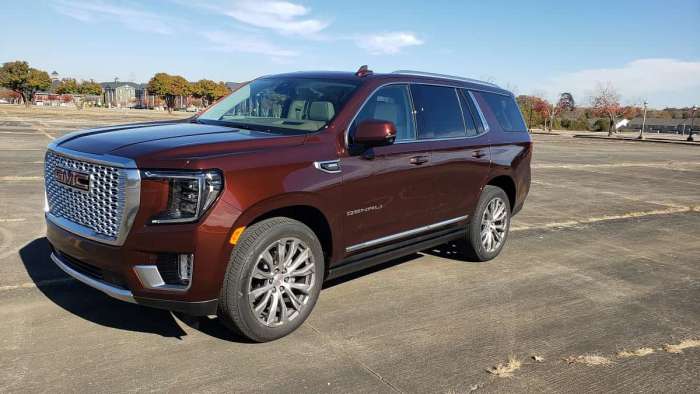 This week Torque News is testing the 2022 GMC Yukon 4WD Denali and in this review I am going to tell you what has changed from the 2021 model year and the Google element in the infotainment.
Advertisement

The 2022 GMC Yukon has entered the era of modernity. It retains its qualities and corrects its faults. Lagging behind the Ford Expedition since 2018 in terms of sales, the Yukon is doing everything it can to regain the lead.

In many ways Yukon is an impressive mainstream full-size SUV. But it has done even more in the 2022 model year with some modernizing changes and improvements transforming this SUV to a new level.

In this review of the 2022 Yukon 4WD Denali I will focus on the main changes from the 2021 model year and will see how they add to overall value of the vehicle.

New for the 2022 model year in Yukon and Yukon XL

First of all there is a new available color. It's Redwood Metallic. Actually it is the color that we at Torque News reviewed this week and you are seeing them in the 2022 Yukon Denali's images accompanying this review. 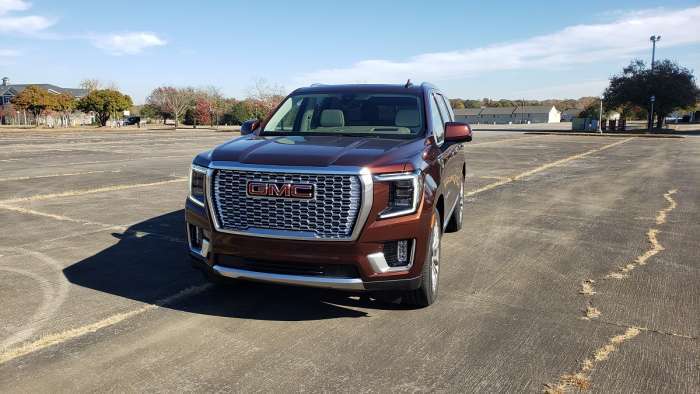 Also, there is a new expanded 6.2L V8 engine available in the 2022 GMC Yukon. The 6.2L engine will become available option on the Yukon AT4 and sport a dual exhaust. if you are thinking between the 6.2-liter V8 and the Duramax 3.2 liter turbodiesl 6-cylinder inline engine, then know this: despite its lower power compared to the 6.2-liter V8, the Duramax is able to easily cope with towing say 7,000 lb boat. It is the torque of the diesel engine, available at low revs, that makes all the difference and allows towing with ease. This engine is also very smooth and perfectly combined with the V8's 10-speed automatic transmission. However, the Duramax engine leaves me skeptical in terms of maintenance and long-term reliability. We have very little data on the reliability of this engine. For the moment, it seems to be holding up, but it must be said that it arrived in 2020 on the market, which leaves us little perspective.

Also, as you consider keeping your vehicle for a long time, the reputation of diesel engines shows that the risk of breakage is very real with such an engine. The complexity of the anti-pollution system with urea injection can cause long-term problems, which usually come with a hefty bill.

This is why I welcome the addition of the new 6.2L 6.2L V8 engine in the 2022 GMC Yukon. I think going for the 6.2-liter V8 would be the best option. We know how reliable this engine is and despite the fact that it uses more fuel than the Duramax, it will serve you better in the long run in my opinion.

However, GMC Yukon models equipped with the 3.0L I6 LM2 turbodiesel Duramax powerplant and 2WD post fuel returns of 21 mpg in the city, 27 mpg on the highway, and 23 mpg combined. This is according to EPA estimates. 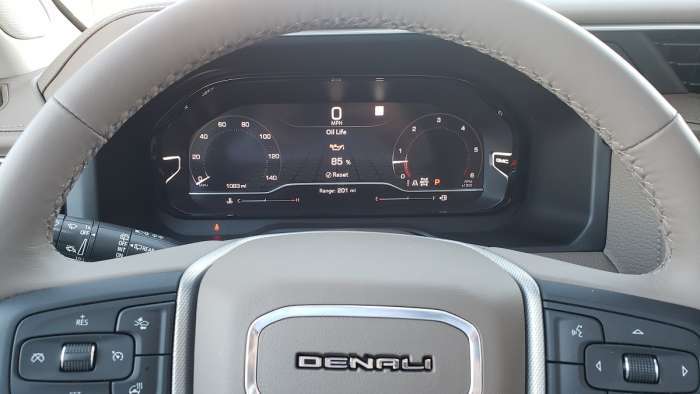 Also, another update in the 2022 Yukon is the Power Sliding Center Console now becoming standard on Denali.

One surprising update in the 2022 Yukon Denali was the Google Built-In technology in the infotainment system. 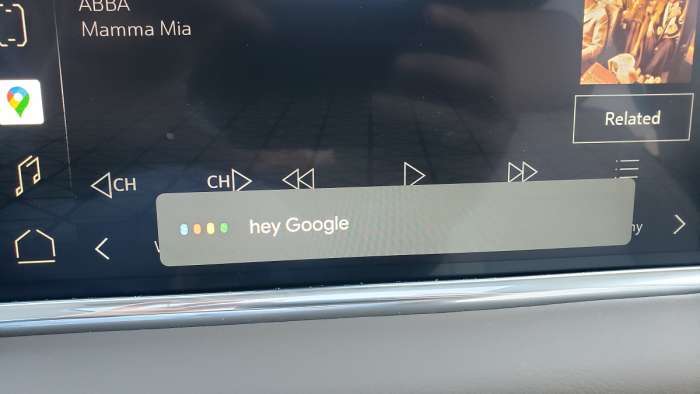 Actually, the infotainment system is itself new with Google Built-In technology becoming standard across the Yukon lineup. It is so well connected to every aspect of the vehicle. Not only the radio, but engine, performance and so on that you can simply talk to it and it will give you any relevant information. For example, my son, asked "hey Google, how much gas do we have in this vehicle," and Google's built-in technology answered and correctly said that we have 61% gas remaining in the tank.

The Denali version we tested sits at the top of the lineup, as is the case with every GMC product. It represents two-thirds of the model's sales, which is quite extraordinary considering that it is by far the most expensive. But in general Yukon is available in two sizes - the Yukon and Yukon XL - and has four trim levels - SLE, SLT, AT4, and Denali. Yukon XL is the largest Yukon.

A Few Words About 2022 Yukon Denali's Exterior and Interior

As I mentioned above the interior and exterior of the 2022 Yukon have not changed from the 2021 model year. The exterior of the Yukon Denali is still imposing, starting with a Denali-exclusive front grille, with a redesign that uses mesh with a satin chrome finish and block-style elements, which the brand claims create nearly 10,000 reflective surfaces. 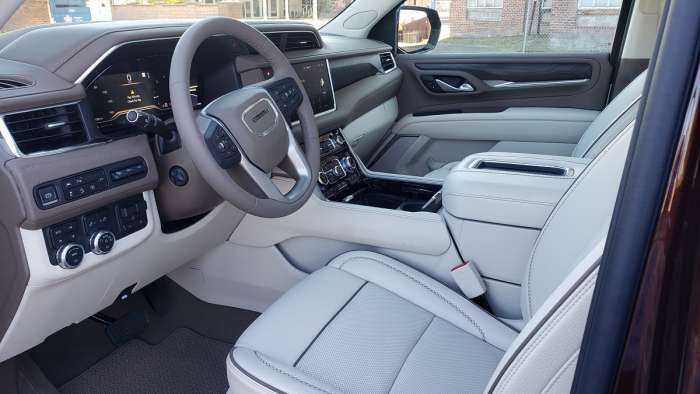 This grille, along with the LED daytime running lights, LED headlights and LED fog lights, blend together perfectly and form a very aggressive and imposing front end.

Its sides did not undergo visible changes. The sides give it a classy look and on both you can see some chrome accents. Both sides have a hidden step, which opens automatically when either door is opened. This step has lights around its perimeter, which turn on at night, when one approaches the vehicle with the key.

At the rear, the also imposing tailgate that allows access to the primary cargo area, now incorporates a separate hinged glass panel to facilitate access to the cargo area without having to open the entire door.

The optional Denali Ultimate package, among other things, also includes a dual-panel panoramic roof that covers up to the second row of seats. 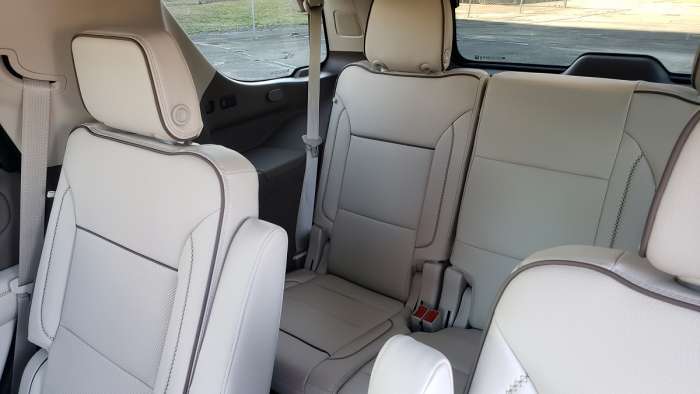 If the exterior is imposing, the interior is not far behind, with great materials and a luxury like few others, much more luxurious than the previous version and with more space both in the third row of seats, as well as in the primary cargo area.

Up to 7 people can sit very comfortably in this 2022 GMC Yukon XL Denali. The rear captain's seats can be slid forward and back, as well as folded flat or folded forward, and together with the greatly improved third-row seat, it offers more cargo space. This XL with the seats folded down offers 144 cubic feet of cargo space. 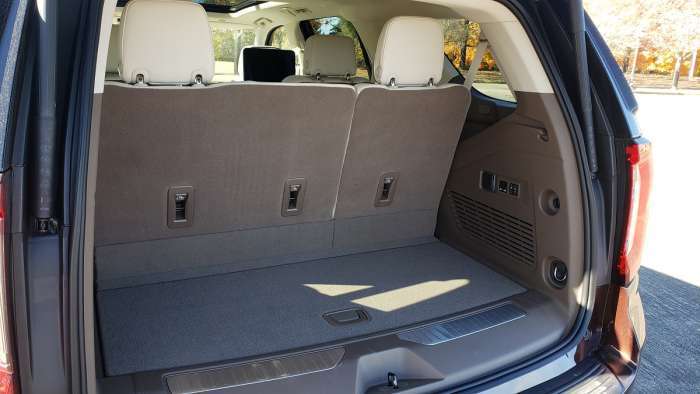 If you would like to know more about the exterior and interior design, please look at my previous review of the 2021 GMC Yukon Denali, which I did only a few months ago. The exterior and the interior have not changed in the 2022 model year, except those, which I discussed above.

If you accept what this vehicle really is, it is very difficult to fault it when driving. When it comes to transporting people and equipment, it doesn't get any better. Yukon is a big vehicle and keep in mind that each maneuver serves as a constant reminder that the laws of physics still apply.

When it comes to buying the Yukon, remember that a large vehicle like the Yukon has a purpose. While the vast majority of us don't need that much capacity and space, others do, especially if one has a large family or if you are in a business of transporting business customers from the hotel to the airport or from the restaurant to the embassy. 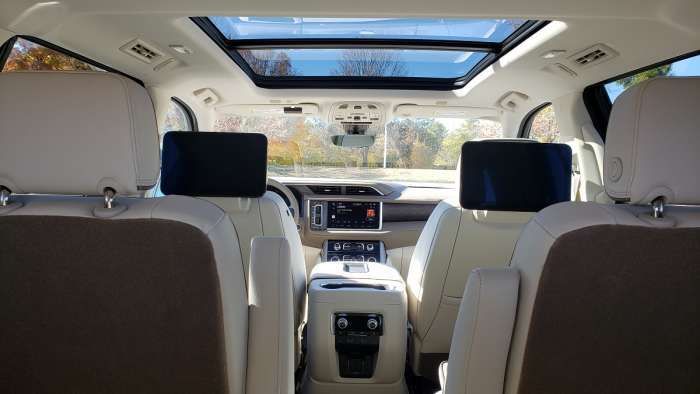 GMC takes a big step forward with this generation Yukon, which it started in 2021 model year. This will allow it to continue to dominate the market. The Yukon already accounts for 38% of sales in its domestic segment; it could grow. GM's strategy with this vehicle is its traditional growth, but it would be interesting to hear someone talk about electrification, especially when something is being done for the Silverado pickup EV. 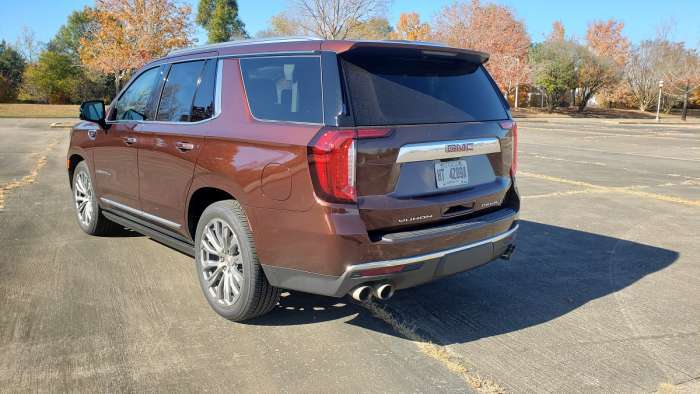