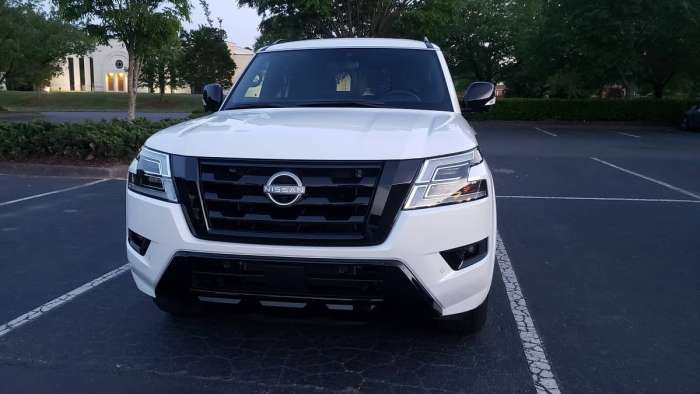 Marketed in other markets such as Nissan Patrol , in the United States, this large SUV is called Nissan Armada and has been on sale since the summer of 2003. Now the Japanese firm has updated the huge Nissan Armada 2021, with aesthetic changes, a somewhat more powerful engine and a renewed interior, which also includes much more equipment and, above all, more technological solutions.

The Armada is the largest SUV in the Nissan range. Based on the same mechanical bits that underpin the Infiniti QX80, the Armada is a large three-row SUV, employing a classic body-on-frame construction. 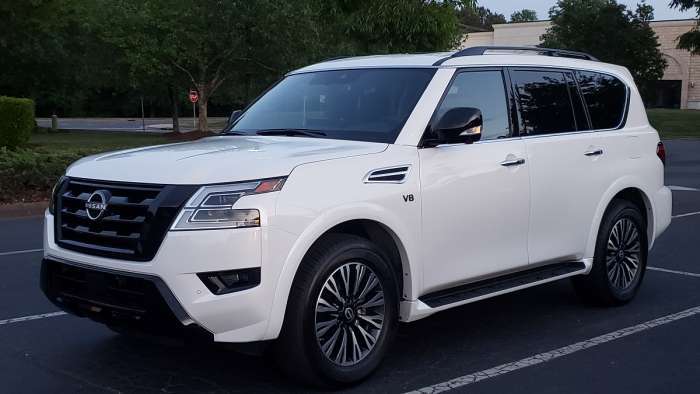 With the new 2021 Armada, Nissan brings even higher levels of authentic capability, advanced technology and premium style, comfort and connectivity to the brand's flagship SUV.

The Armada is renewed for 2021 with a revised front styling, a new infotainment system with a larger screen, wireless smartphone charging, more power, and additional safety gear. It also has a trailer sway and brake controller.

On the outside, the new Armada now comes standard with LED headlights, as well as LED daytime running lights in the form of a bracket, located on the sides of the front. The V-shaped grill is also wider and has a different and less flat design. 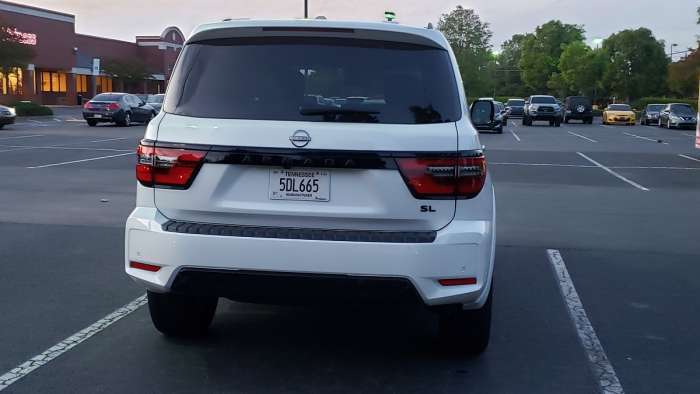 The imposing front end is accompanied by slight changes to the rear, such as a redesigned bumper or slightly modified drivers. The brand also offers the Midnight Edition package, which allows customers to add many darkened elements to the exterior. 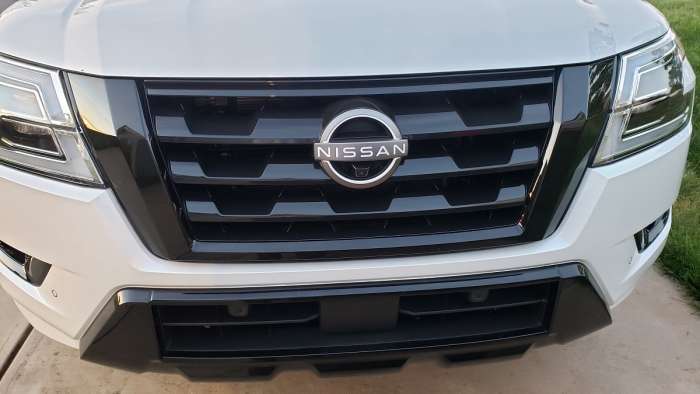 The Armada features a redesigned exterior that includes a new grille, hood, front fenders, front and rear bumpers, new LED headlights and taillights, and a new exterior color. It is also the first vehicle to bear the new Nissan logo.

In the interior the multimedia system stands out, with a new 12.3-inch screen and higher resolution, which replaces the previous one of only 8.0 inches, compatible with Apple CarPlay wirelessly. The instrument panel is also digital, specifically 7.0 inches, and even the interior mirror, which in the top-of-the-range finish, Platinum, is virtual. In other words, it works through a video camera and a 9.4-inch screen, instead of a mirror.

Armada's interior is arguably the highest-quality cabin in the Nissan lineup. It doesn't skimp on the materials category, covering much of the cabin in soft-touch vinyls and plastics and providing a well-crafted imitation of wood trim. The high-end models have padded leather upholstery. 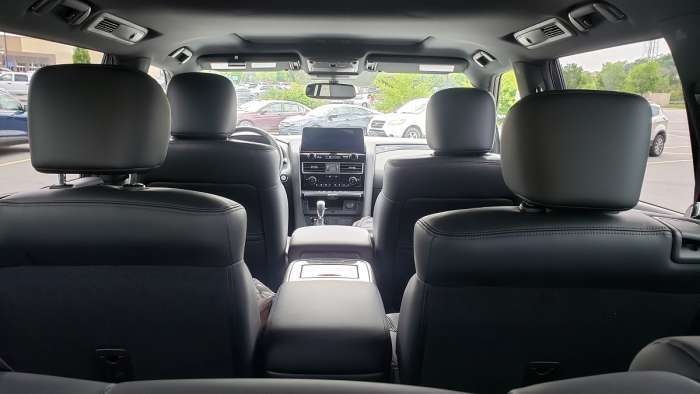 Nissan offers two interior configurations: seven seats with captain's chairs or capacity for eight occupants with regular seats. As with most three-row SUVs, the third row seats are narrow for adults, but taken as a whole, the Armada is a true testament that Nissan seats are among the best in the industry. The 2021 Armada offers 16.5 cubic feet of cargo space behind the third row, which, while not small, falls short of some competitors like the Ford Expedition with 20.9 or the Chevrolet Tahoe with 25.5 cubic feet of space. 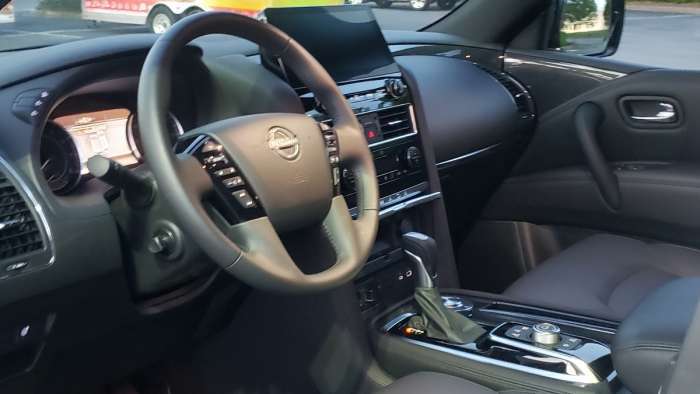 The 2021 Nissan Armada comes with antilock brakes, front side airbags and side curtain airbags. It comes with the Nissan Safety Shield 360 package with blind spot monitoring, lane departure warning and automatic rear braking.

This year, a Blind Spot Intervention System is released, which automatically returns the vehicle to its lane if the driver tries to change lanes and a vehicle is in their blind spot.

The digital rearview mirror has a higher resolution for 2021, giving you a clearer picture of the road behind when luggage in the cargo area is stacked on the roof.

Advanced safety features are well tuned to eliminate false alarms, but adaptive cruise control tends to accelerate too slowly when vehicles ahead start to move.

The Driving Experience of the 2021 Nissan Armada

The Armada, like its competitors, has a body-on-frame architecture, in this case the same used in the Nissan Titan. The first driving sensation is precisely that you are at the wheel of a truck. It feels like a large vehicle when you drive it, and it is difficult to maneuver on narrow streets or in parking lots.

Despite the remarkable roll of the body when taking corners or sharp curves, on the road its ride is docile and quiet, with good damping and free of vibrations, thanks to its independent double wishbone front and rear suspension.

The 2021 Nissan Armada comes in three trims: SV, SL, and Platinum. The base model comes with a nice array of features and plenty of driver-assistive technology for $5,000. The SL trim at $56,000 has a few added perks, but if you are going to skip the base SV model, you could also move on to the Platinum trim level, which comes with a number of comfort upgrades that are mostly not available on the lower trims, like seats with heating and ventilation, captain's chairs in the second row with entertainment system or power-folding seats in the third row. All this luxury would be costing about $65,000 dollars. 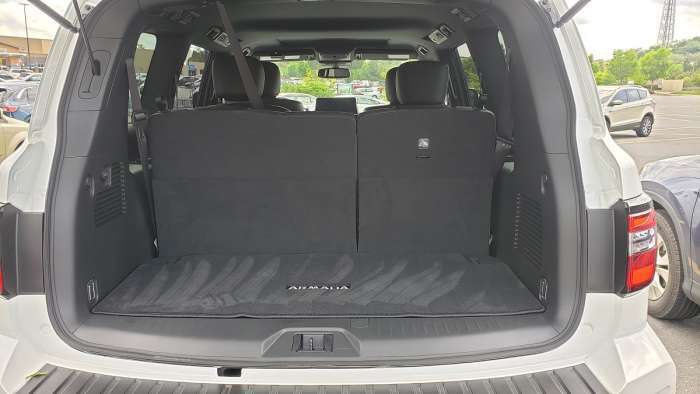 Nissan Armada's main competitors are the Chevrolet Tahoe and the Ford Expedition. You could also consider a Toyota Sequoia.

Nissan's drive to modernize the Armada pays good dividends in 2021. It is undoubtedly winning to become a more complete and better-equipped SUV, but its competitors have also improved a lot.

Nissan manages to keep it vital, and if in future editions it modernizes its styling and equips it with a more efficient engine, it could continue to play a vital role in the market for full-size SUVs.