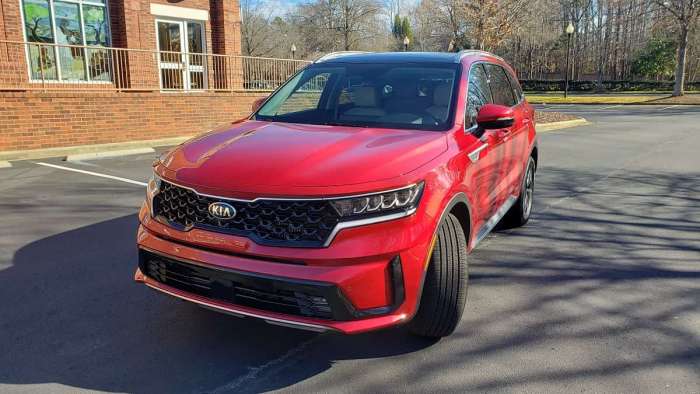 The 2021 Kia Sorento Is One of The Best Hybrid SUVs

This week for two days we test-drove the 2021 Kia Sorento Hybrid SUV and think it's currently one of the best hybrid SUVs in the market.
Advertisement

First, I want to share with you that the 2021 Kia Sorento is a new generation of SUV from the Kia Motors and there are novelties at all levels.

The 2021 Kia Sorento takes on a more robust and sporty look. In fact, I'll admit that it reminds me of the new Ford Explorer and some Range Rover models, which isn't a bad thing in the end. However, when you take a closer look, you recognize the Kia aesthetic signature and with it, a host of pretty elements. In short, Kia did a good job.

I even asked a friend to bring his 2020 Kia Sorento, a previous generation, so I can take a picture of the the new generation 2021 Sorento with the previous-generation's model, so our Torque News readers can see the differences and similarities and compare them. 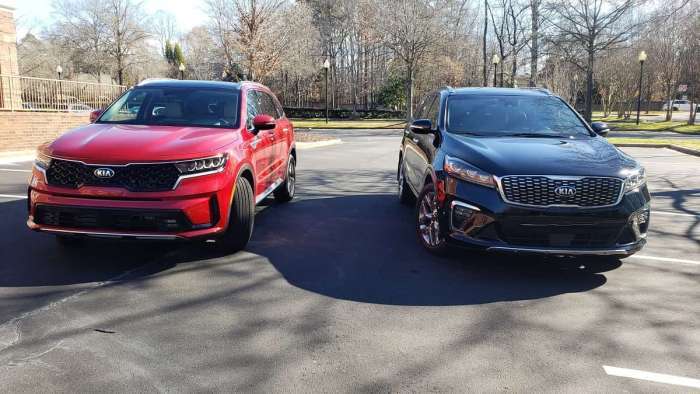 This new Sorento is the first generation of the model to receive an electrified powertrain. The New 2.5-Turbo option with 281 horsepower and 311-lb-ft of torque is mated to a segment-exclusive 8-speed wet-clutch DCT. Kia says the new Turbo-Hybrid powertrain features 42 additional horsepower and nearly 50% better fuel economy than the outgoing Sorento base engine. Also, there is the available Plug-in Hybrid option with 261 horsepower and an estimated 30 miles of pure electric driving range. 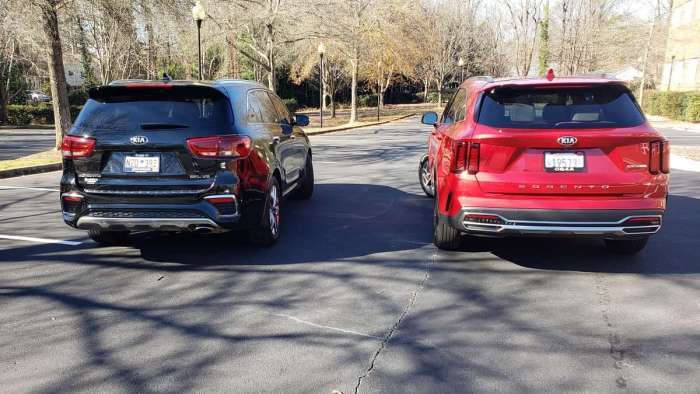 The design is certainly scalable, but there are still several new features. Kia has modernized the "tiger nose," the hood edge wraps around the body side and integrates into the rear shoulder line. The side character line is strong, emphasizing muscular and athletic profile. The vehicle has a distinctive dynamic wave shape and comes in six different alloy wheels designs, from 17-inch to 20-inch, which Kia says, is the largest ever for Sorento. As for the rear portion, it drops the horizontal position lights in favor of vertical lights, a signature reminiscent of a certain Lincoln Navigator of the first generation. 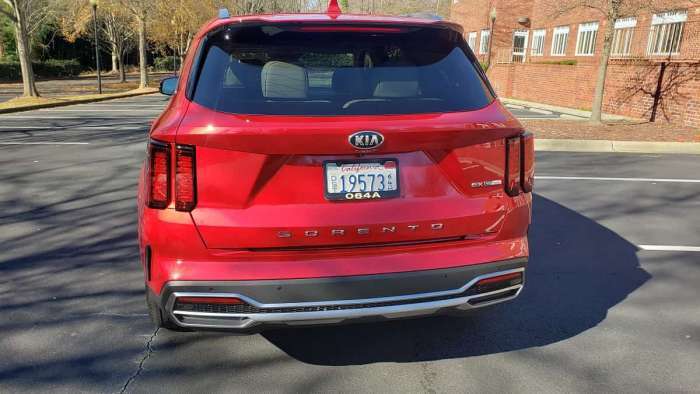 The interior of the 2021 Kia Sorento also gains in finesse and luxury with a finish more raised than ever and a style capable of pleasing even the most capricious driver. Moreover, the Korean manufacturer's SUV incorporates more technology than ever. Kia clearly knows how to listen to its customers and this is something that shows in the all-new Sorento. 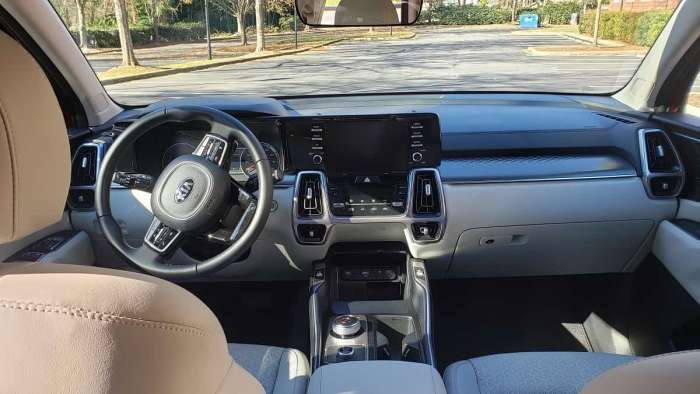 Inside, you will also receive a complete transformation. In addition to the 8 or 10.25-inch touchscreen multimedia systems (depending on the trim or option you select), there are also eight USB ports inside the vehicle.

The UVO approach will also be there with all its functionalities, such as connected routing, connected weather, enhanced UVO voice assist features, UVO smart speaker, and connected user profiles. In terms of safety, just to give you an idea, two pages of the press release were devoted to the features that can be found with the model. let's say, it's complete. 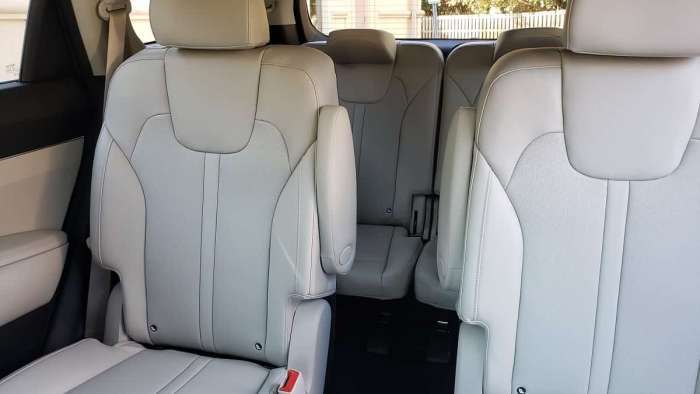 The interior is full of light, especially if you open the panoramic sunroof. The first and second rows are very roomy with plenty of legroom. The space in the 3rd row is narrow, but it could be great for children. The trunk is rather small with the 3rd-row seats unfolded. However, you get plenty of room if you fold the 3rd-row seats. But this compromise is compensated with a myriad of additional goodies of this SUV and particularly the estimated 39 MPG city / 35 highway / 37 combined hybrid mileage. 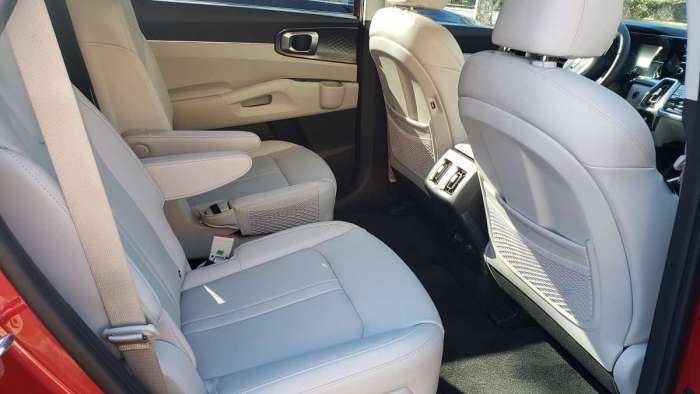 As you can see the Sorento is a very important model within the Kia lineup. It is therefore not surprising to see Kia giving it much attention. I think the 2021 Kia Sorento will be expected to be a top seller SUV with the Seltos in 2021.

DUNG NGUYEN wrote on May 16, 2021 - 10:07pm Permalink
WAITING ON THE PLUG IN HYBRID-- more powerful HP and Torque; PLUS ESSENTIAL ARE THE EMERGENCY AUTOMATIC BREAK IN THE FRONT and the REAR; 360 DEGREE monitoring PLEASE EMAIL ME , OR TEXT TO 408-807-8690
novaanna wrote on October 11, 2021 - 5:29am Permalink
I am happy to find this post Very useful for me, as it contains a lot of information. A very amazing post thanks for sharing with us.