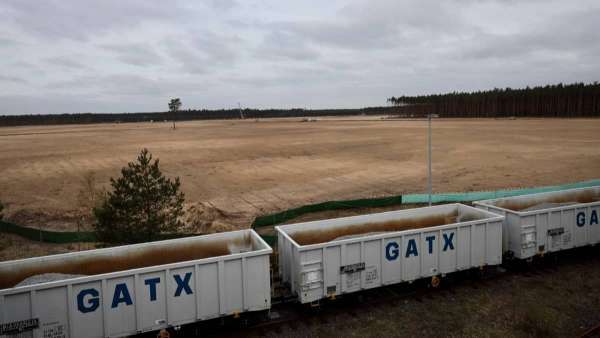 Tesla Uses Train at Giga Berlin for The 1st Time

After several days of standstill and wait today Tesla resumed its construction of Giga Berlin and brought an industrial train to deliver gravel to construct roads.

Today there is a new scene at Tesla Giga Berlin. There is a new activity. Although the work had stopped at Giga Berlin in the past several days, we see something new. Tesla is using a railroad to bring and unload gravel to build roads.

For the first time, Tesla is using an industrial train railway. Tesla is expected to use the trains in the future too as it will need more gravel and materials to build the highway junction, which I reported this morning.

Now, there are two railroad operators in the area. One is the DB, which is the national and major railway operator in Germany. The second is a private rail operator called Deutsche Regionaleisenbahn in short: DRE.

On March 28 I reported and quoted DRE a private railway owner, saying "We have learned that the railway is interesting for Tesla" - for example for material transports from Poland and the transport of cars to Bremerhaven for loading on ships. Because of DRE long freight trains can go directly to Tesla Giga Berlin.

If you look at the Giga Berlin's map, you will see that there is an unusual railway that divides the property of Tesla into two unequal parts. This short railroad connects Freienbrink industrial estate to the rest of the rail network - and would enable Tesla to handle logistics in an environmentally friendly manner. “The route could be used immediately. We are ready,” says Gerhard Curth, the head of the small train.

This unusual company is the owner of the approximately 3.5 km long single-track railway line (2 miles), which branches off the route from Berlin to Frankfurt (Oder) in the forest just before the catch gate. It is the German Regional Railway, or DRE for short, from Berlin-Charlottenburg. The question then was "is Tesla even interested in railways?" Apparently Tesla is very interested in this railway.

Today, for the first time we see Tesla using this railway for gravel delivery for the Berlin Gigafactory's road construction.

Tesla-Funded Research Reveals One of The Biggest Mysteries of EV Battery
Tesla Tesla Buyer Nets a Whopping $12,000 Discount After Asking for Reduction
END_OF_DOCUMENT_TOKEN_TO_BE_REPLACED