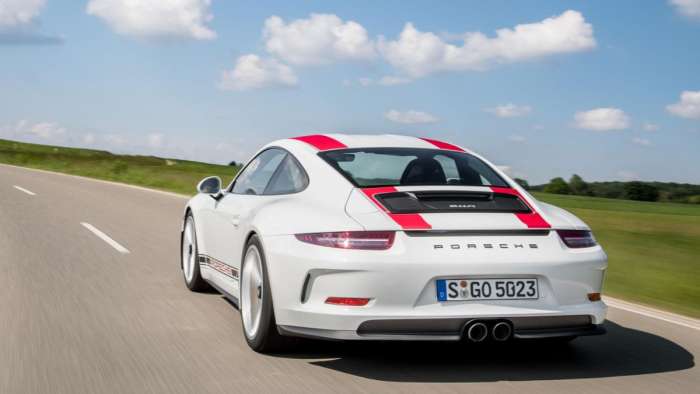 Why The Porsche 911R Was Gone So Soon

Four years after the release of the Porsche 911R we look back on the bad decisions that resulted in a really good car.
Advertisement

In the automotive industry, there are often certain people who understand cars like no other. It is usually a handful of individuals who know what car enthusiasts want and how to achieve that. This results in certain cars and in some cases, certain companies that make wonderful driving machines. Unfortunately, like Anakin Skywalker, there is usually a Darth Vader that overrules the good inside.

What I am slowly getting at here is that too often we see a car with such potential that either gets ruined at the last minute by corporate decisions (Alfa Guilia), or gets undercut to favor profits(BMW M2). The consumer vehicle marketing people do tend to make unpopular decisions at the detriment of the good cars. Witness, the 911R.

Ever since the first 991 GT3 RS came out, we knew that Andreas Preuninger, head of Porsche’s GT division, was one of those guys who gets it. He is one of those executives that has spearheaded the team over at Porsche to make their GT cars drive wonderfully. He is our jedi in the fight of the 911R with the dark side of the force.

When most people hear the name 911 and the letter “R” they think of the 1973 Carrera RS 2.7, the extremely valuable road car and predecessor to the ever iconic, 911 RSR race cars. However, exactly 6 years prior to that 2.7, Porsche had built another 911 meant for racing, dubbed the 911R.

They wanted to race against Ferrari and other prominent Italian brands in the GT class, a level of racing in which you must sell a certain amount of road version to homologate your race car. Sadly, their financial situation couldn’t support 500 new cars so the car raced in the prototype series and only about 20 customer cars ever made it off the line in Stuttgart, making it an extremely rare and legendary car.

Fast forward 50 years and we arrive at the next car to wear the 911R denomination, the 2016 911R. Preuninger stuck to the cars roots in pursuit of weight reduction and analog experience. This recent 911R got the 500 hp 4.0 liter from the GT3 RS but instead of the PDK you get a 6 speed manual. Sound deadening kept to a minimum, engine noise kept to a maximum, and the steering kept just right, this 911 felt just like an old 911 only with 500 hp and outstanding handling. Its optional green or red stripes pay respect to its ancestor from 67’ as it spotted a pair of red stripes on the famous record holding car.

At this point you may be asking, “so where’s the Darth Vader in this story”. Plot twist, its Porsche. Preuninger wanted to go out and sell 5000 911Rs, which is still a small number regardless of how special it is. 5000 units is around new Ford GT territory, which is a half-million dollar supercar for Ford’s special people. Porsche told him and his team they could only sell 500. This made sense for the 911R legacy as the 60’s car was supposed to sell 500 units but never did. It was a cute homage but when we look at the facts it doesn’t make any sense.

In the midst of the dispute over the 911R, the marketing team went and pitched the idea to all the existing 918 customers and nearly sold all the 500 units that they were intending to build. Oops! It backfired on the company and left the people who ordered the 911R before the 918 customers behind. So, Porsche then had to go back and come up with an excuse to build more 911Rs. They decided to build 991 units to honor the 991 generation 911. Total Screw up.

If Porsche had listened to Andreas Preuninger in the first place, that 911R project would have gone a lot smoother and they would have about 4,000 more happy customers with 911Rs. It is a good thing that the car was amazing because they cared enough to follow through with it instead of cutting production entirely. Also, that 718 Cayman would have never gotten that horrible little 4 cylinder a couple years ago and we may have had the 4.0 Cayman earlier. Car companies need to listen to people who get it, we would all be so much happier.

See you in my next story titled: Porsche's PDK Rumored To Make Its Way Into The Cayman GT4 And Boxster Sypder.