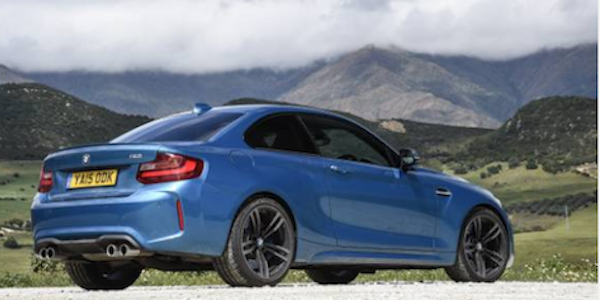 The BMW M2 Coupe is now Jeremy Clarkson’s favorite BMW M machine. Why does the M2 get him so exited?
Advertisement

The BMW M2 makes Jeremy Clarkson’s spine tingle, his eyes pop and his heart race. The new BMW M2 excites him so much, it makes his “Star Car” list for 2016. Clarkson says the new M2 is now his favorite M car to come out of BMW M GmbH. He says, “To be more than just a tool, a car must make your spine tingle, your eyes pop and your heart race.”

The BMW M2 impressed Clarkson, because he mentions it along side the Porsche 911 GTS and an Aston Martin DB9. Clarkson's says the M2 is faster than both of those vehicles. He says, “Coming off one roundabout, I may have put my foot down a bit, into the overboost zone of the M2’s turbocharged torque lake, and there’s no getting round the fact that it was faster than both of the way more expensive GT cars.”

Before Clarkson drove the M2 Coupe, the M3 V8 model, the current M6 Gran Coupe, and the original 286bhp M5 were his favorite M cars. But after getting behind the wheel of the newest M model, his tastes have changed. Clarkson says, “And then there was the original, 286bhp M5: the ultimate Q-car. It looked like the sort of box that your chest freezer was delivered in but it went like a spaceship. That’s always been my favorite M car. Until now.”

Somehow we think Clarkson liked the BMW M2 Coupe more than the rest. It’s definitely his favorite M car now. He says, “The M2 is not just fast in a straight line. It’s also fast through the corners. And not just fast, but a complete delight. It’s so good that in a few bends I was actually dribbling with joy.”