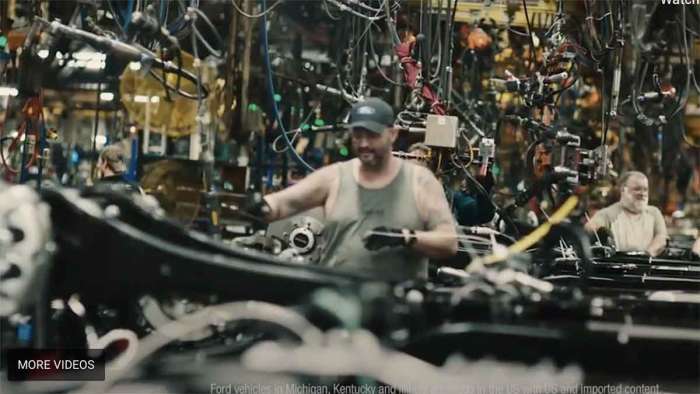 Ford launches three new ad campaigns that offer hope and optimism as auto manufacturing starts back up. Ford emphasizes importance of American manufacturing and key driver of the economy.
Advertisement

If you’re like me, there’s a fatigue factor when it comes to TV ads right now during this pandemic. Each one has the same tone or uses the same phrases like “in these uncertain times” and “we are in this together”. Plus, each ad, regardless of who the advertiser is, seems to have the same Debbie Downer tone. And frankly, I just tune them altogether.

Car manufacturers are just as bad with their ads right now. Toyota’s usually peppy commercials even have a somber tone. Enough already!

As someone who covers the auto industry, I actually really enjoy car commercials. Many times they’re poignant or funny. They can get annoying during Christmas time when they play over and over. But I digress somewhat here.
I was excited when in my email came a release from Ford of three new commercials, all poignant and positive in nature. I recently reported on the revised production schedule for the Ford F-150 now that the plants are reopening.

I felt the need to report on these commercials. We can all use some encouraging, positive messaging right now (in these uncertain times??).

“The auto industry is the backbone of America’s economy, and we’re proud of our workers’ resolve and dedication to quickly pivot and produce life-saving personal protective equipment during the coronavirus, making a real difference when the country needed us,” said Kumar Galhotra, Ford president, Americas and International Markets Group. “Now Ford is ready to lead the way in safely restarting our U.S. factories, reopening other facilities essential to delivering the vehicles our customers need and doing our part to help restart the country.”

The new campaign, featuring three new ads and social media content, underscores how Ford’s workforce quickly shifted gears to develop urgently needed medical supplies during the pandemic. The content – produced by Wieden + Kennedy with voiceover by Bryan Cranston – highlights Ford workers’ strong values and solid work ethic while honoring the resilience of a nation ready to face the challenges of returning to work.

Ford’s Vital Economic Role
As I reported, Ford is soon to begin a phased restart of their manufacturing plants, geared toward making vehicles again. This includes restarting vehicle production at key plants and bringing back approximately 12,000 employees who are not able to do their jobs off-site. Ford parts distribution centers resumed full operations in North America this week, supporting Ford dealers in providing service to keep cars and trucks – including first responders’ vehicles – on the road.

“Ford chooses to invest more in America than any other automaker in part because of its rich history here. There are a lot of parallels between how the company and the country face and ultimately overcome challenges,” Galhotra said. “It’s not easy, and it’s not always comfortable, but we don’t back down. We will work hard to come back – aiming to be even stronger than before.”

Built To Lend a Hand Program
As the pandemic started and production was halted, Ford launched an aggressive financing offer that we reported on several times. The Built to Lend a Hand program includes 84-month, interest free financing along with several other financial incentives for the purchase of 2020 vehicles, including F-150.

“Our initial communications focused on assistance and reassurance,” said Matt VanDyke, Ford director of U.S. marketing. “The next phase of communications is about recovery. Ford is America’s car company. We’re looking toward the future and staying committed to our customers – what they want, what they need – each step of the way.”

Everyone wants the economy to get going again. And that involves getting manufacturing going. Ford of course is a key part of that process.

An estimated 10 million workers in America are employed by automakers, their suppliers, dealers and related businesses. Vehicle sales and service, plus incomes and government revenue generate $953 billion annually in the country.

“Autos are the engine of America’s economy,” Galhotra said. “While we must do so safely, it’s time for us to start running again while remembering those who helped keep us in the race.”

As Ford has had a very rough fiscal year, and the F-150 has seen a sharp decline in sales, all of this couldn’t come at a better time. And despite all the gloomy news coming from Dearborn, it’s quite encouraging for Ford to remain on a positive message and tone with these new ads.

Blake wrote on May 17, 2020 - 10:29pm Permalink
Man whatever. Ford isnt ready to do jack squat except shut back down. Screw their money!!