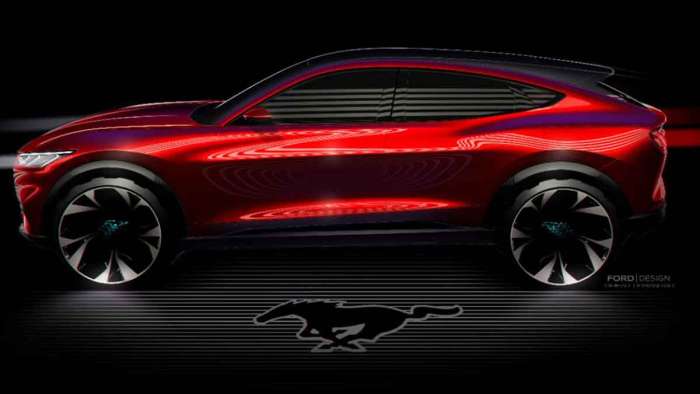 Defining What A Mustang Is, Requires A History Lesson; Mustang Mach-E Will Be Part Of That History

#NotAMustang movement forgets a lot of Mustang heritage and history. The Mustang nameplate lives on despite several missteps, near misses, and a future that includes an electrified crossover.
Advertisement

“In some industries, being ahead of your time is a great advantage. But not in Detroit. Just as the car industry can’t afford to lag too far behind the consumer, it also can’t afford to be coming out with a new product too early is just as bad as being too late.”

This quote was from the legendary Lee Iacocca from his autobiography. He was talking about the original Mustang there, but looking back on that quote it is quite applicable to the current Mustang as well as the much discussed Mustang Mach-E.

I can’t help but wonder what Iacocca would’ve thought about the electrified Mustang Mach-E. I never met the father of the Mustang, but through my friendship with the late great Gale Halderman and his stories of Iacocca, I almost feel like I know the man.

Iacocca was a risk taker. That’s why partnering with his right-hand man Hal Sperlich was ideal. Sperlich was even bolder and an even bigger risk taker. I have spoken to Sperlich on numerous occasions. While we’ve not discussed the Mustang Mach-E, I believe he would endorse it, including the name being used. It’s a big bold move by Ford. It’s a move that is Sperlich and Iacocca-like.

Let’s not forget, the original Mustang was not supported by many at Ford Motor Company including Henry Ford II. It took a lot of coaxing and coercing to convince him. And Iacocca and Sperlich’s jobs were on the line if it failed.

Which of course we know it didn’t fail, but instead was a tremendous success. So with this quick history lesson, we can look throughout the Mustang’s entire history and see times where the Mustang fell off its original mission and strayed from its original look and goal.

But that’s because the Mustang has evolved out of necessity throughout its 55+ year history. As should all cars. Other than the Chevy Suburban, no other nameplate has last as long as the Mustang. And it’s ability to evolve and adapt (and times survive) through changing times.

Let’s look at a few times the beloved Mustang changed to where some people proclaimed the change to be too much or #NotAMustang. 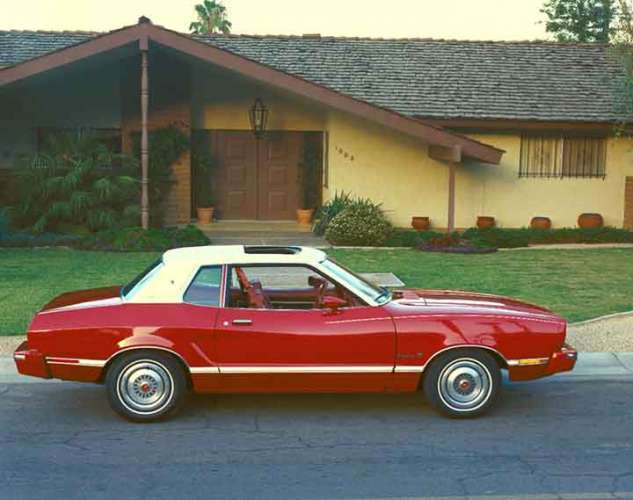 Ford Mustang II: Second generation Mustang
The Mustang II was a reaction to the global oil crisis. Cars were shorter and lighter to save on fuel economy. Engines weren’t as big or powerful.

The Mustang II was based on the Pinto. The Pinto. Talk about #NotAMustang! Yet, despite the puny engine, and the lack of original Mustang-like looks, the Mustang II was still a financial success. Over four years of production it sold more than 1.1 million units.

Remember, and I tell people this all the time, the auto industry is all about the units sold. That, and only that will determine a car’s success.

The Mustang II is often ridiculed amongst the purists for its lack of power and performance and its bland looks. Indeed, the Mustang II doesn’t look like what Gale Halderman originally designed in the 1960s. But perhaps it was time to move beyond that.

Could the upcoming Mustang Mach-E follow in the Mustang II’s path and be both ridiculed by the purists, yet be successful? Time will tell as it will be all about number of units sold for the Mach-E. 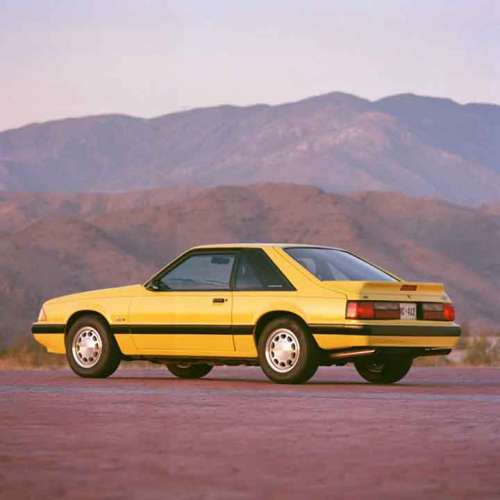 Fox Body: Third Generation Mustang
The Fox Body is beloved amongst so many enthusiasts. Yet some purists, myself included, felt the Fox Body went even further “off the rails” when it came to design and looks.

I would never speak ill of the Fox Body Mustangs (for fear of hate mail) but I found this generation to stray so far from the original that it made me yearn for the return of the Mustang II.

But there are some who could say that the with hatchback styling, square headlights, the lack of a three-piece taillight (like the original had) that the Fox Body is not really a Mustang.

I have the utmost respect for the entire Mustang community, and I’ve met so many through the years sitting with Gale at car shows and book signings promoting our book Mustang by Design. Gale did not design the Fox Bodies, and I feel like so much of the Fox Body lost many of Gale’s timeless design elements.

For that reason, one could argue that the Fox Body platform changed the Mustang too much. And yet it thrived and survived . . . until it was almost killed. 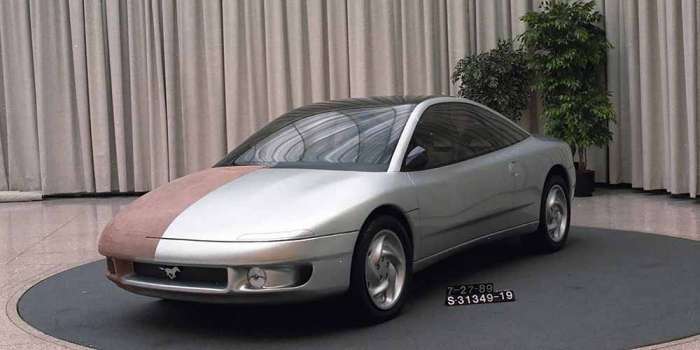 The Maz-Stang
In the late 80s, Ford started a partnership with Japanese automaker Mazda. Gale made many trips to Japan and learned a lot from some of their studio stylists. He had a lot of respect for the way they designed cars. However, history shows one of the biggest moments in the Mustang’s history occurred in Japan.,

The Ford Mustang was almost a front-wheel drive coupe. The Japanese had redesigned the Mustang drastically. When it was shown in clay it was gasping moment to see the Mustang logo emblazoned on the front of what would become the Ford Probe.

See the above photo (courtesy of my book "Mustang by Design").

Talk about #NotAMustang! The Maz-Stang almost happened were it not for a few boisterous VPs at Ford who implored Ford to change their mind. As such, the Mustang got a slight redesign in the middle of the Fox Body platform and thankfully, mercifully, the Maz-Stang didn’t happen and rather the Ford Probe went into production.

Had this happened, this surely would’ve been the end of the Mustang brand. In fact, sales continued to dip for the Fox Body including a dip below 100,000 units for the first time. So a total overhaul had to happen and that ushered in the fourth-generation SN-95 platform, which went back to many of the styling cues that were identifiable to the Mustang.

The End Of The Pony Car?
Remember how I said a tell-tale sign that the Mustang was in trouble was the dip below the 100,000 units? Well since 2008 that has happened 10 times and it’s on pace to have it happen again this year, with 2020 being likely the worst-selling year ever for the Mustang.

Houston, we have a problem. Remember, I said the auto industry is all about money and Ford has already shown that the car-side of things is not very profitable and thus they’re out of making cars and focusing on making SUVs, crossovers and trucks. That’s where the money is.

Of course the last “car” standing is the icon, the legendary Mustang. So it’s a good thing that pony car lives on. In fact, there’s already work being done on the seventh generation Mustang. Automotive News quoted sources at Ford saying that the Ford Mustang, as we know it, will stick around until at least 2030.

The seventh-generation Mustang will make its debut in 2022 as a 2023 model year, ushering what might be the last generation of the Mustang. A lot will be riding on the low-slung, sporty muscle car.

And to be honest, some of the Mustang’s existence and future is tied to the success of the Mach-E. 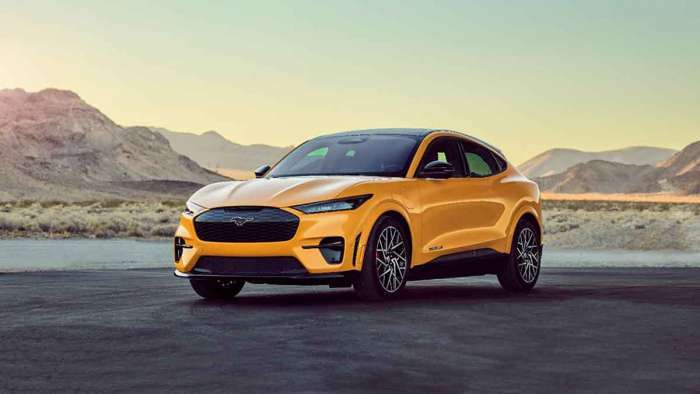 The 2021 Mustang Mach-E
I’ve written a lot about the Mach-E. I did a story about Gale’s cousin Jim Halderman and my co-author on Mustang by Design selling his V8 Mustang GT and is ordering a Mach-E GT. It was blasphemy to some.

Jim is a 70-something year old with lots of automotive knowledge and is excited to be an early adapter for the Mach-E and electrification. I’m 30 years younger than him and I’m not ready to embrace it.

What does that say about me? I do believe, honestly, that putting the Mustang name on a crossover was a mistake. But as I’ve learned more, I realize what Ford is doing. For those of us who love the Mustang heritage we have to embrace the Mach-E as a vital part of that.

Hear me out. You don’t have to buy the Mach-E but you have to put it in the family and the Mustang heritage. It does at least bare many of the same styling cues that the classic Mustangs do. Before he died, Gale said he saw the Mach-E in clay and thought it looked like a Mustang. You can hate the Mustang II, but if it had failed, there wouldn't have been a Fox Body Mustang or any other Mustang after that.

Has Ford brainwashed me? No, far from that in fact. Am I still critical of the Mach-E? Absolutely. But I am willing to consider it and be fair to it. I do not want the Mustang nameplate going the way of the Camaro and just dying a slow painful death.

I want the Mustang, and Gale’s legacy for that matter, to live on. If it has to be in a four-door electrified crossover, then so be it. But, please Ford, keep giving us V8 pony cars too!

Alright, let me have it. Have your say. I'm sure some of what I said here has invoked a comment or two. Leave me your thoughts below.

DeanMcManis wrote on January 1, 2021 - 4:55am Permalink
Jimmy, it's a fun stroll down Mustang lane. And I'm also not a big fan of the under powered Mustang II. But all sporty and performance vehicles suffered in that era. I liked the Ford Probe, but I am glad that Ford kept it as a separate model, and left the traditional Mustang, with it's V8. The Mach-E stands on it's own merits as a performance vehicle, but it's undeniably a crossover. And not a ponycar. Or a real Mustang to me. It is purely marketing driven to name it Mustang, in the same lame way that Porsche named their top Taycan EV models "Turbo" and "Turbo S". Porsche's first production, performance EV deserves all of it's accolades, and (to me) the Taycan is even more of a true Porsche than The Cayenne or Macan crossovers. But any engineer who calls an EV a "Turbo" model deserves a kick in the shins. Likewise, I won't be using the Mustang name to describe the cool new Mach-E from Ford. However I am totally supportive of putting the Mach-E GT motors and drivetrain into a real Mustang coupe and convertible. Happy New Year!