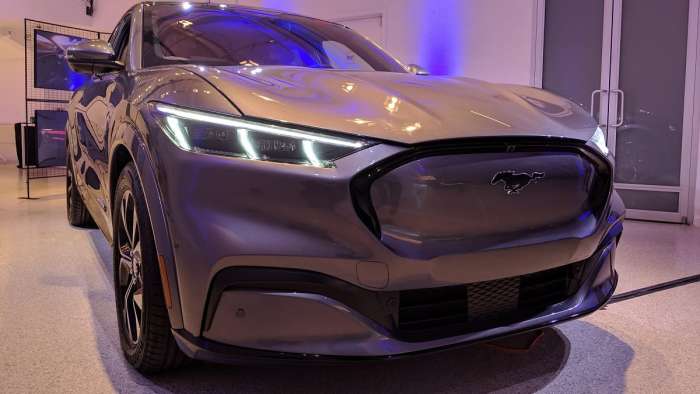 Despite two other luxury automakers selling electric SUVs, it’s Ford that’s about to take a bite out of Tesla with its upcoming Mustang Mach-E at the end of 2020.
Advertisement

Modeled on the Mustang, the Ford Mach-E beats Tesla at its own game: selling a practical, yet compelling, must-have electric vehicle with 300 miles of range (in specific trims) at a nominally affordable price.

Mustang purists howled when the company proposed to name its first fully functional electric vehicle after a performance edition of the brand’s iconic Mustang. The Mustang famously changed history, conjuring overnight demand by draping an ordinary sedan in a track suit. The buzz has never died down.

Mustang fans argue that the car has always been a sports car, with hardly a rear seat, nevermind a four-door, much less an SUV. Ford has tinkered with four-door Mustang show cars in the past, but none before has been worth producing at the risk of diluting the Mustang brand, says Darren Podner, Ford’s Global Director of Product Development for Electric cars.

The Mach E, he argues, represents and even bigger leap for Ford and the auto industry than the original Mustang. He refers to the Mach E as “car 2.0.” And he’s not wrong, even if Tesla beat him to it.

With no polluting internal combustion engine contributing to climate and political disruption around the world, cell-phone-like over-the-air updates that can add new features at the click of a button, and the potential to transform the car ownership and driving experience, the Mach E promises to be more than a car.

The Mach E doesn’t really move the needle far beyond what a Tesla has done, but it does have several advantages: First, it’s a lot cheaper than Tesla’s first electric SUV. The base Mach E will sell for $43,895 with destination), similar to Tesla’s upcoming Model Y.

More importantly compared with the California startup automaker, Ford has built the Mach E to meet all the company’s “automotive-grade” standards. That means it can be expected to have no overheating and unusable command screens in early models, no ineffective brakes, and even tight and even body gaps. 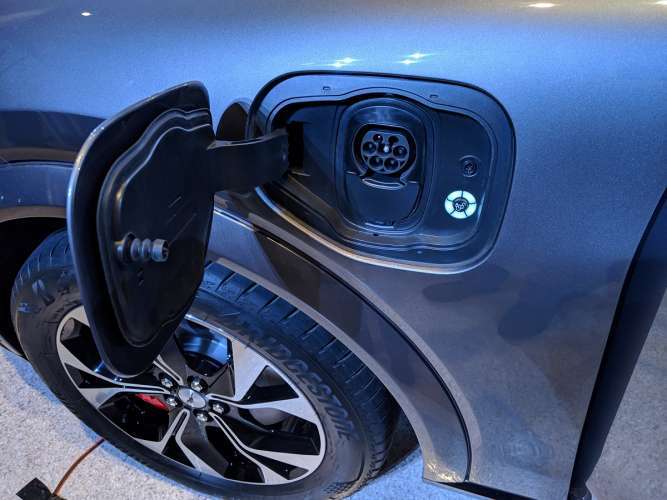 Probably even more importantly, it is built by an automaker with more than 100 years of experience meeting production deadlines and quality standards - one that literally invented mass production. Not insignificantly, it will also be backed by Ford’s nationwide dealer network and sales and marketing team ready to arrange conventional loans and leases to make it easy for ordinary consumers to buy.

Between that, and the price equivalent of a compact Tesla Model 3 sedan for a midsized SUV with similar range, the Model E could find a host of buyers. 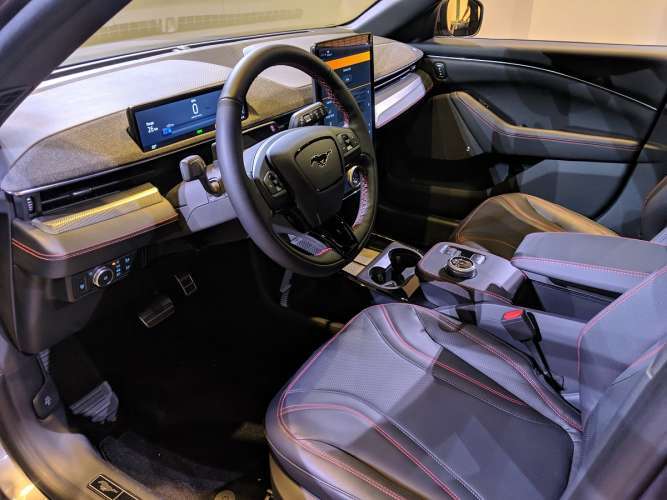 Ford is taking $500 now, and the car is expected to go on sale late next year, with the full range of five trim levels coming the following spring: The base Select has a 75.5-kWh battery and targets an EPA range rating of 230 miles, or 210 miles with all-wheel drive. (Rear-drive is standard.). Starting at the Premium trim, Ford will offer a larger, 98.8-kWh battery for an extra $5,000, with a 300-mile targeted range, or 270 miles with all-wheel drive. The top-trim GT, with the large battery, 459 horsepower, standard all-wheel drive, and a 0-60 time solidly in Tesla territory of below 4 seconds, is expected to deliver about 235 miles of range. Those numbers line up closely with Tesla’s upcoming Model Y. 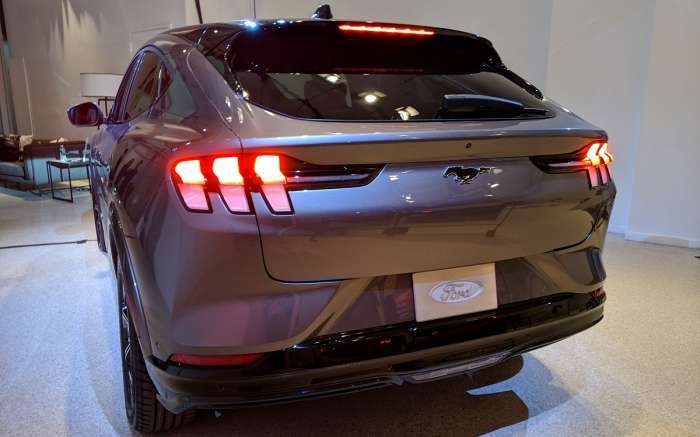 See you in my next story discussing the practical use of the Tesla Cybertruck.

Eric Evarts has been bringing topical insight to readers on energy, the environment, technology, transportation, business, and consumer affairs for 25 years. He has spent most of that time in bustling newsrooms at The Christian Science Monitor and Consumer Reports, but his articles have appeared widely at outlets such as the journal Nature Outlook, Cars.com, US News & World Report, AAA, and TheWirecutter.com and Alternet. He can tell readers how to get the best deal and avoid buying a lemon, whether it’s a used car or a bad mortgage. Along the way, he has driven more than 1,500 new cars of all types, but the most interesting ones are those that promise to reduce national dependence on oil, and those that improve the environment. At least compared to some old jalopy they might replace. Please, follow Evarts on Twitter, Facebook and Linkedin. Find more of Eric's stories at Torque News Ford coverage. Check back again and search for Torque News Ford news for more Ford Mustang news coverage.

DeanMcManis wrote on November 20, 2019 - 6:31pm Permalink
I am also happy to welcome the Mach-E to the world as Ford's first long range crossover. But pretty much all of the "advantages" that you mention about Ford and their Mach-E would also apply to Chevrolet's Bolt, which has been on the market for several years, and the Nissan Leaf, and more recently Hyundai's BEVs. The Mach-E certainly compares well on price to Tesla's Model X, but it is not really competing against the Model X, it's competing again the models that I just mentioned, plus the Model Y, and upcoming VW ID.4, and any other EV and PHEV CUVs that hit showrooms late next year. Because the Mach-E will have many models and options it could be that it meets some buyer's needs better than the competition, but otherwise it is not really superior to any of them from what I can see. Still, the Mach-E should have a huge effect on the larger automobile market simply because Ford will have all of their resources behind the development and production of the car. The biggest question for me is whether or not Ford commits to supporting the Mach-E. Chevy killed off their Volt, and never actively promoted their EREV or BEV models. Not in any manner like the way that they promoted their higher profit gas and diesel powered models. Tesla has always wholeheartedly supported their BEVs, and as long as Ford commits to making the Mach-E a hit, then it looks like it will be a great EV competitor.
EE wrote on November 21, 2019 - 6:37pm Permalink
Agreed. It comes down to the long-term commitment. With Bill Ford's name on the building, though, I'd bet the company will keep pushing on EVs.
John Synook wrote on November 21, 2019 - 12:15pm Permalink
Ford is not moving the needle at all. The Model Y is cheaper, has better power density, has better performance numbers, and is likely to be far more reliable than Ford's first effort at a fully electric vehicle -- despite their 100 years of building cars. Not to mention all of the specs here are pre-production -- and how many times have we seen a traditional automaker shift those numbers backwards upon the actual release once they realize that they cannot hit their targets? Porche Taycan, Audi Etron, Hyundai Kona, etc.
DeanMcManis wrote on November 21, 2019 - 4:55pm Permalink
Ford did actually build a BEV Focus, but I do get your point that this is their first big battery effort. I do think that they probably learned a lot from their Energi (PHEV) models, which are essentially electric cars, just with a gas engine generator backup. Still, I do agree that generally Ford's 100 years of automobile manufacturing only goes so far in building a better EV. Remember that Ford's years of auto building expertise was counteracted by greed when they used poor design and materials building the Pinto and Granada. But I will give them credit that their newest models are well designed and built. The Porsche Taycan actually exceeded their promises in many ways like better acceleration, but their range, weight, and especially cost projections were off by quite a bit. One point that is off on the Mach-E's announcement is that they list the $43K entry price right next to 300 miles of range and 0-60 in 3.5 secs, which is deceptive because the lowest priced model does not have the extended range, or the fast acceleration. But they do look like they will offer many models and options, which can be a buyer's advantage for some people.
EE wrote on November 21, 2019 - 6:38pm Permalink
Time will tell.
EE wrote on November 22, 2019 - 6:09pm Permalink
... "is deceptive because the lowest priced model does not have the extended range, or the fast acceleration." True, except that this is no different than any car has ever been, from AMC's to Teslas.