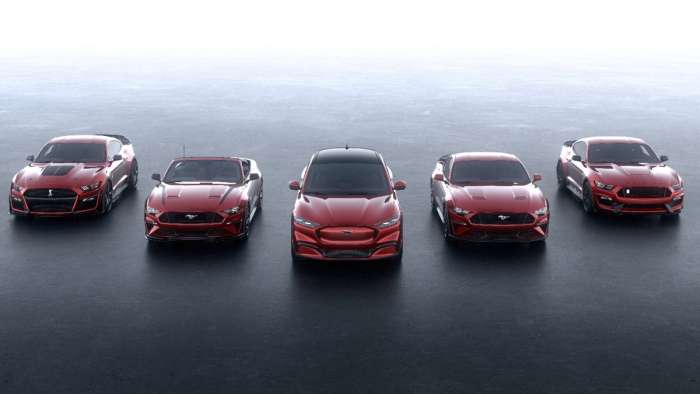 Mustang Fans Shouldn't Hate the Mach E Because of the Name

The new all-electric sport utility vehicle hasn’t replaced the mighty Mustang that Ford fans love, so the talks of the Motor Company killing the car that we know and love are unfounded.
Advertisement

Last night, Ford Motor Company finally introduced the Mustang inspired electric SUV that we knew was coming. What we didn’t expect was that Ford is actually calling the electric four-door SUV a Mustang. It is called the Mustang Mach E and it is being marketed by Ford as being part of the Mustang Family, which also includes the Mustang fastback, convertible, GT350 and GT500.

Sure, it has some styling cues that are clearly borrowed from the pony car and the performance numbers sound worthy of the Mustang name, but this is unlike anything that has ever worn the name in the past. Really, this all-electric SUV with four doors is the opposite of the legendary Mustang, but the company still chose to call it a Mustang – adding the Mach E portion to the end of the name to identify it separately from the sporty two-door cars.

Anger Over the Mustang Name
As you might expect, the decision to call the new EV SUV a Mustang has not gone over well with critics. Within the Ford enthusiast world, Mustang owners are outraged that such a legendary name would be applied to the newest electric automotive appliance. Outside of the Ford enthusiast world, Mopar and GM fans are laughing at the fact that Ford has “ruined the name”, a sentiment which is echoed by some Ford fans as well.

While I get the point of view that using the Mustang name on an electric, four-door SUV is an odd choice, I don’t agree at all that Ford has ruined the name. After all, the people who hate the Mach E and who hate what it stands for are still able to buy a “proper Mustang”. It isn’t like the Mach E is replacing the current pony car; it is just a new trim line. A trim line that shares absolutely nothing with the other cars in the family lineup, but in any case, the fact that you can still buy three different V8-powered pony cars is proof that Ford hasn’t ruined the name.

Frankly, if Ford had completely transitioned the 2020 Mustang into the 2021 Mach E, literally replacing the sporty fastback and convertible with an electric SUV, I would be outraged as well. I would agree that the Motor Company had done a disservice to the Mustang’s heritage – but that isn’t what is happening at all.

Ford Mustang Mach-E Is an Impressive EV
If you put aside any anger that you have over the use of the Mustang name, the Mach E is an impressive machine. In some forms, it will offer 300 miles of driving range on a single charge, while also being able to dash from 0 to 60 in the mid-5-second range. In the high performance GT form, the Mach E will get to 60 from a stop in the mid-3-second range. That would make it one of the quickest Ford production vehicles of all time, rivaling the new Shelby GT500.

Ford has used some Mustang exterior styling create a sporty looking electric SUV, including the running pony logo on the front end. The company wants to drive home the fact that, in addition to being all-electric, it is still very quick and fun to drive. Ford fans associate “quick and fun to drive” with the Mustang name, so with that regard, it is a great marketing move to call this SUV the Mustang Mach E. The move has obviously upset some people, but the fact that the Mach E will be on sale at the same time as the 760-horsepower GT500 should quiet the concerns about Ford diminishing the Mustang name.

Finally, keep in mind that for high performance, V8-powered cars to continue into the future, automakers need to balance them out with super-efficient vehicles. This helps companies fit within the requirement of CAFÉ laws, so an all-electric Mustang Mach E helps to secure the future of the supercharged Mustang GT500.

See you in our next story where we discuss how the EV community helped Ford to design the Mustang Mach-E electric vehicle. Also read Eric Evart's recent story discussing the advantages of Ford Mach-E over Tesla.

DeanMcManis wrote on November 18, 2019 - 6:26pm Permalink
The Mustang naming is lame. It is not that the Mach-E isn't cool, for a crossover. It is just that it is simply NOT a Mustang. This is an unfortunate naming trend like the Taycan "Turbo" S EV (which obviously has no turbos). But I think that the Marketing suits simply can't wrap their mind around selling an electric car on it's own merits, so they pitch it as a part of a larger family of cars. It is a poor choice. Using an established marque/brand like the Mustang, does enhance the attractiveness of the Mach-E somewhat, but it also messes with the Mustang's history and degrades it's legend. GM wanted to similarly extend the Corvette brand to include a whole line of Corvette-family vehicles, but happily GM saw that it would hurt the Corvette's reputation more than help it. For my part I'm not going to be angry at the compelling Mach-E, but I am just not going to refer to it as a Mustang.
Digitaldoc wrote on November 18, 2019 - 10:31pm Permalink
Unless it has a V-8 with RWD, than it is really not a Mustang. Ford should have just done the styling differently, and left the Mustang out of this new introduction.
DeanMcManis wrote on November 20, 2019 - 11:05am Permalink
I would have been totally fine with an AWD, electric Mustang car. Which I think that they should still build. I would be fine calling it a Mustang, just as I am with the turbo 4 powered Mustang, even if that's not the one that I'd buy for myself. I am even fine with Ford borrowing styling cues from the Mustang for the Mach-E in the same way that Chevy borrowed styling cues from the Camaro when designing the new Blazer. It is just that Chevy wisely called their new CUV the Blazer, not a Camaro. Even though it would have pissed off some Ford truck folks, I think that they should have called the new Mach-E the Lightning, and dropped the Mustang name. It would have tied the new electric vehicle to the previous F150 Lightning performance truck, and buyers would identify with the electric vehicle's impressive performance.
Peter Neilson wrote on November 19, 2019 - 10:33pm Permalink
I in no way hate the car, I love it, but the name has to go.
Chris wrote on November 21, 2019 - 6:12am Permalink
The mustang is a Pony car. This suv is not a pony car so it should not be called a mustang. Mr Ford is rolling around in his grave right now.
Mark Dello Russo wrote on November 25, 2019 - 2:13pm Permalink
The author obviously isnt aware of Mustang history. I dont think anyone will hate this vehicle because of its name, but its name should not be Mustang. The history and tradition of the Mustang name should not be lent to an SUV. Its a pony-car. Its classic American Muscle car. Its Ford vs Chevy competition. its a lot of things. But it is not an SUV. Its very nice looking. Its interesting, something that i am sure a lot of people would consider buying. And yet- its no Mustang. Even the 4cyl Mustangs or Mustang II's in the past had some relevance to being a Mustang. What I can guarantee is that Chevy will NOT come out with an SUV called Camaro or Corvette. Ive owned 6 Mustangs (currently, sadly, do not have one as I needed to go the "family" route at the moment) and I feel badly for current Mustang owners. The name and tradition are being stepped on.
Arthur Baier wrote on December 13, 2019 - 12:53am Permalink
Associating the Mustang name with this bulbous truck (SUV) is absolutely wrong. They could have named this vehicle anything they wanted that was in-line with what it really is. A utilitarian family vehicle for "soccer moms and families that had to trade in their Mustang so they could move their kids around. Sorry, but that does not cut it. Ford is simply playing on the Mustang name because there is no cache to Explorer, Bronco, Edge etc. This vehicle has absolutely nothing to do with Mustangs. Neither in looks, style and it certainly is not a 2+2 2-door sports car. How good/not good it is, and how quick may be has absolutely nothing to do with it. It simply is not what a Mustang is. If Ford wants to make the Mustang with an electric motor option, fine, do it in the current body style. If they want an electric motor SUV, fine, I hope it works out for them. JUST DO NOT CALL IT A MUSTANG. Thousands and thousands of Mustang owners are not happy and it can all easily be fixed. Take the Mustang name and horse off of this vehicle. Call it the MACH-E if you must, but remove all references to the Mustang name. I for one will never call it a Mustang as it does not deserve that distinction.
Michael wrote on April 28, 2020 - 11:55am Permalink
And this is the point: Mustang fans will (grudgingly) accept an electric Mustang. What we will never accept is a Mustang SUV. The SUV part is what offends people. Ford should never have crossed this line (and Mitsu should never have applied the Eclipse name to an SUV, either). That they are is not just disappointing but a demonstration of a titanic disrespect to all Mustang owners past and present and to the heritage of that name. Again, electric is fine, being an SUV is not.
Robert Mayville wrote on December 15, 2020 - 11:39am Permalink
Awful design lines. Too curvy, bubble-like...almost as ugly as the Cayenne. This car desperately needs a new skin.