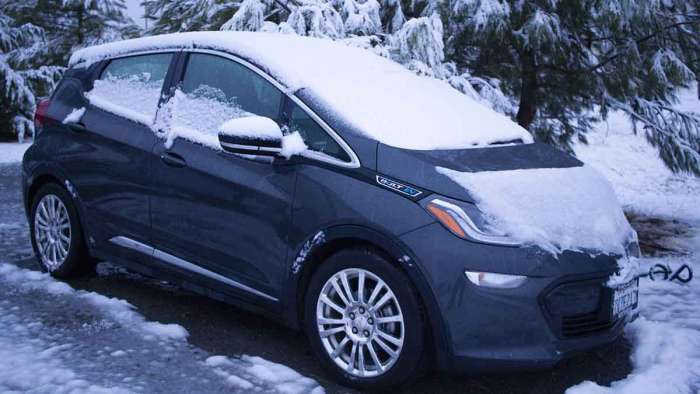 My Chevy Bolt EV Sat Unplugged in the Cold: Here's What I Learned

I left my 2017 Chevy Bolt EV unplugged for two nights in freezing temperatures. Here's what I learned about its "vampire drain" and battery heating.
Advertisement

Our Chevrolet Volt needed a chance to plug in for a while over Christmas week, so that meant that my Chevy Bolt EV needed to spend some time unplugged in during freezing overnight conditions. I’ve been attempting to track the Bolt EV’s battery thermal management behavior, so this gave me a great opportunity to spy on the inner workings of the Bolt EV using Torque Pro (an app that reads the car’s sensor data through the OBD2 port. 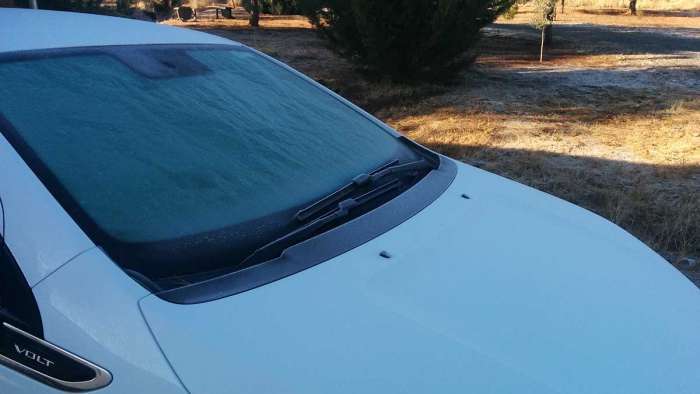 Before I start, I want to mention that while these winter conditions aren’t particularly harsh, they are cold enough to limit electric vehicle battery performance and trigger many of the Chevy Bolt EV’s thermal management systems. In this story, I will describe what I learned about the 2017 Chevy Bolt EV’s battery thermal management systems after leaving it unplugged in freezing overnight conditions for two days.

Chevy Bolt EV Vampire Drain
When I don’t have a long trip lined up, I prefer to leave my 2017 Chevy Bolt EV with “Hilltop Reserve” mode on. This mode was originally designed for Bolt EV owners who started their drives as higher elevations, and it provides full regenerative braking and additional battery capacity to recapture energy (which is otherwise limited when the battery is full). Hilltop Reserve limits the car to charging the battery to 88.2% (according to Torque Pro readings), so when I unplugged my Bolt EV and sent it to pasture, that’s how much capacity it had. 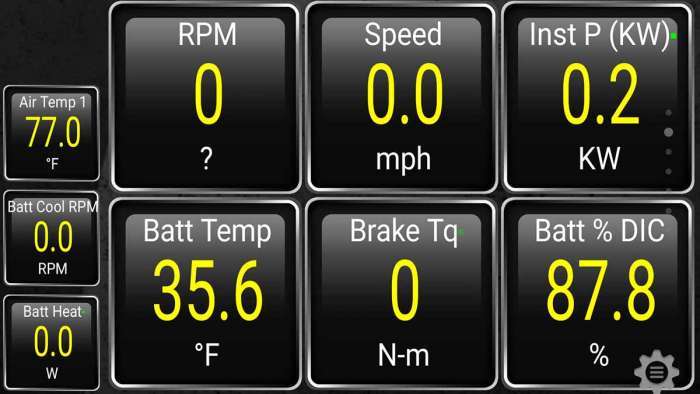 Just for reference, Hilltop Reserve was replaced in later model Chevy Bolt EVs. In 2019, GM introduced a new feature to the Bolt EV that enables the owner to set a “Charge Limit” in 5% increments.

For those who are unfamiliar, “vampire drain” is a term used to describe the power draw by an electric vehicle’s onboard electronics that slowly deplete battery capacity over time. Over the years, I’ve been able to confirm that whatever the Chevy Bolt EV’s vampire drain was, it was very low. When I first got the car, I hit a rock and blew out the tire, so my Bolt EV was left at about 4,000’ overnight in January while I picked up a replacement tire. The vampire drain was low enough then, that by the time I returned, the estimated range hadn’t changed.

Thanks to Torque Pro, I can now quantify just how much the battery capacity drained after two days with freezing overnight temperatures. When I turned on the car and checked Torque Pro, it displayed 87.8% battery capacity. So in two days, my Bolt EV had consumed less than .5% of its total capacity. 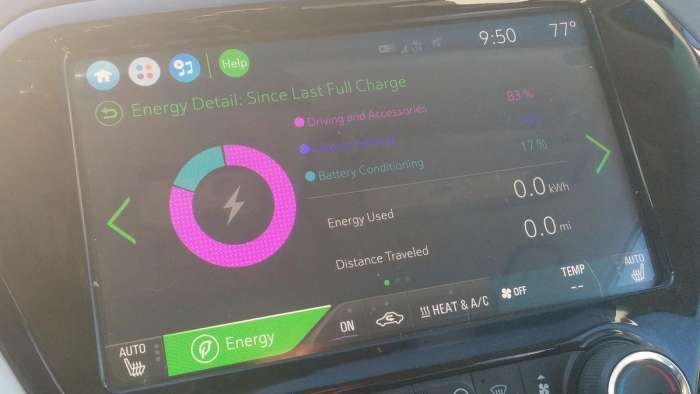 This time, though, the outside air temperature sensor was exposed to the sun, and it was registering an ambient air temperature of 76.1 F. My guess is that something in the Bolt EV’s programming is telling it to not bother running the battery heater if the outside temperatures are high enough that it will eventually warm on its own. 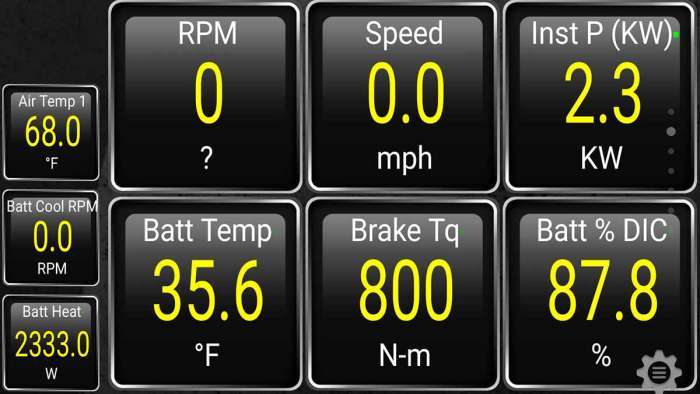 However, the moment I shifted the Bolt EV into drive, the battery heater immediately engaged.

Chevy Bolt EV Battery Heating
The reason I was plugging my Chevy Bolt EV was that I was getting ready to make a 150-mile trip to do some shopping, so I wanted to start warming the battery and adding a little extra energy. As I drove over to our plug, the battery heater started drawing 2,333 watts (about 2.3 kW). By the time I made it to our charger, my Bolt EV had consumed 0.1 kWh with 64% of that energy being used for battery conditioning. 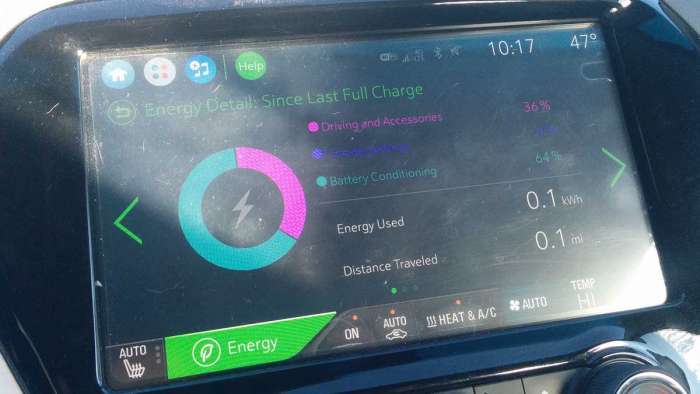 I turned off the Hilltop Reserve mode, plugged in the car, and shut it off. I knew I had about 30 minutes before we were going to leave, so I wanted to see how much the Bolt EV’s battery would warm while it was shut off and charging. To my surprise, the Chevy Bolt EV didn’t appear to run the battery heater aggressively when it was off and charging. The battery temperature had leveled off at 41 F when it was charging. 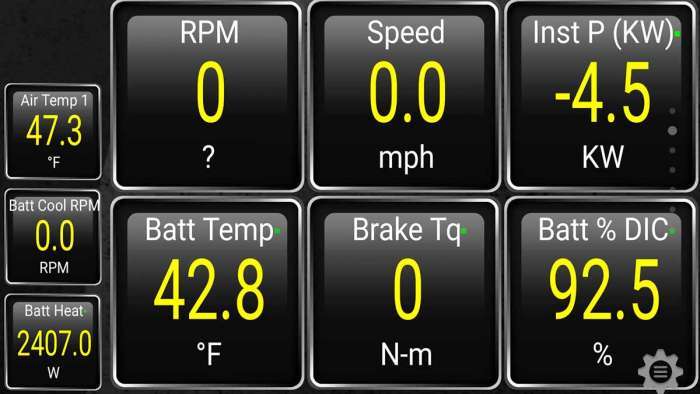 When I turned the Bolt EV back on, however, the battery heater immediately started, and it was now drawing 2,407 watts (2.4 kW). It continued to warm the battery until I unplugged, but I stopped monitoring it with Torque Pro at that point. What I could tell is that it continued to warm the battery as I was actively driving, which resulted in significantly lower efficiency than normal during the first 20 miles or so of driving. 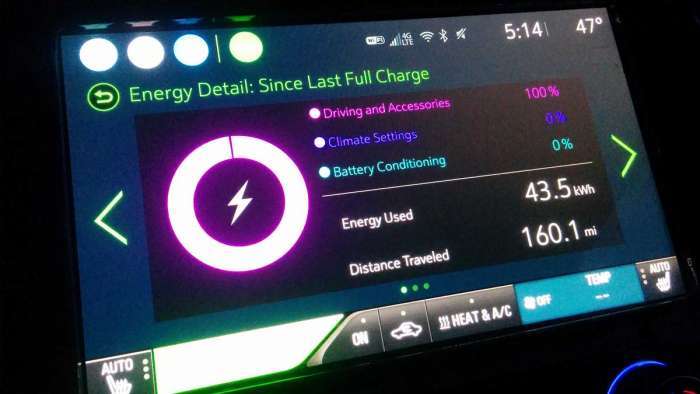 By the end of the trip, the battery temperature had warmed to 62.6 F compared to an outside temperature of 47 F, and all of the energy consumed for battery conditioning no longer even accounted for 1% of the 43.5 kWh expended to complete the 160 mile trip.

Conclusion
While this is still just a snapshot of the Chevrolet Bolt EV’s battery warming parameters, it can still inform Bolt EV owners on how they should operate their vehicles during cold weather. The Bolt EV will not suffer significant vampire drain; however, it will consume a significant amount of energy warming the battery after it is turned on. For that reason, Chevy Bolt EVs should be left plugged into the charger during freezing conditions. 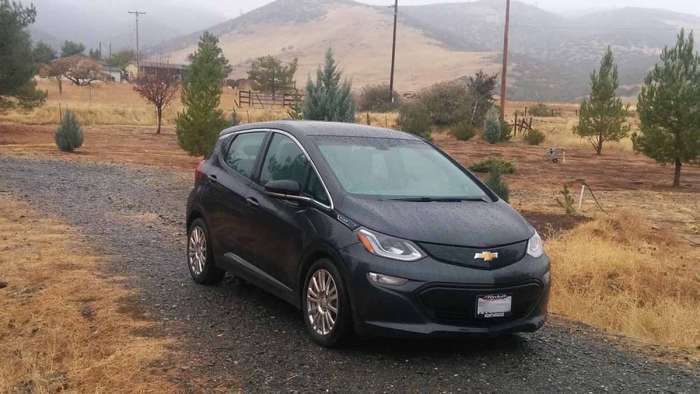 In addition, the Bolt EV will not warm the battery as aggressively when it is turned off, even if it is plugged in and charging. To properly warm the battery during harsh winter conditions, it might be necessary to actually turn the car on while it is still plugged in. This might also be more effective than “preconditioning” the car because the Chevy Bolt EV will only stay on for 20 minutes during precondition, but it will stay on for approximately 1 hour if turned on from inside the vehicle using the FOB.

Still, the Chevy Bolt EV’s onboard battery heater appears to be limited to 2.4 kW, so it still might not be capable of maintaining the battery’s ideal operating temperatures in very harsh winter climates.

See you in my next story where I am discussing Chevy Bolt trip planning issues and tips for better route planning.