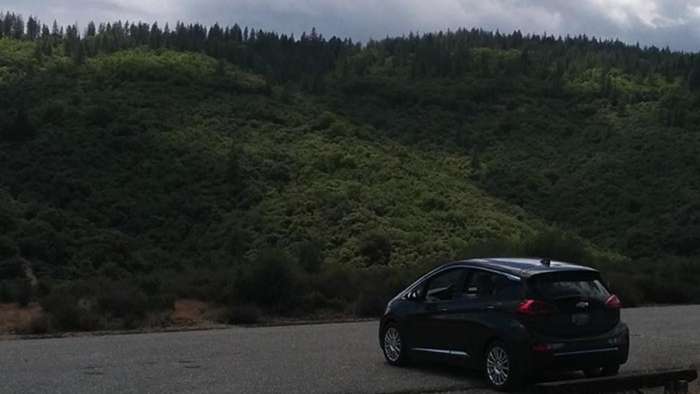 While I personally plan all of my own trips, I know that a number of people still rely on EV trip planners such as A Better Route Planner. However, I have identified several issues with ABRP's results for the Chevy Bolt EV, and I discuss them in this story.
Advertisement

I plan to take a fairly long trip in my 2017 Chevrolet Bolt EV soon, and I’ve already roughly planned out how the trip will go in terms of charging stops. However, a number of people still ask about electric vehicle route planners such as A Better Route Planner (ABRP), so I wanted to look at what ABRP would suggest for my trip.

ABRP’s results were surprising because they nearly matched mine in terms of charging stops, but they were far more conservative in terms of both efficiency and time spent charging. While I appreciate that ABRP’s results are a bit on the conservative side for the Chevy Bolt EV, in my opinion, they go too far. In fact, they make some trips look too daunting for the average Bolt EV owner to undertake. What is more, this isn’t a consistent treatment among vehicles, as the same maps provided for other similarly priced vehicles such as the Hyundai Kona Electric and Tesla Model 3 SR+ are far more accurate to real life.

In this story, I will critique the results I received from ABRP and explain why they don’t appear accurate based on my experiences with the Chevy Bolt EV. Later, after completing this trip, I will revisit this story to compare real-world results with the estimates provided by ABRP.

Chevy Bolt EV Road Trip
For this road trip, I am planning on driving to Fully Charged Live in Austin, and the total distance for me will be 1,450 miles each way. This route is mostly covered by Electrify America chargers at this time (in a recent story, a Chevy Bolt EV owner crossed the country using part of this route), but there is still a gap on Interstate 10 between California and Arizona that is only covered by a single, 100 A “50 kW” charger. 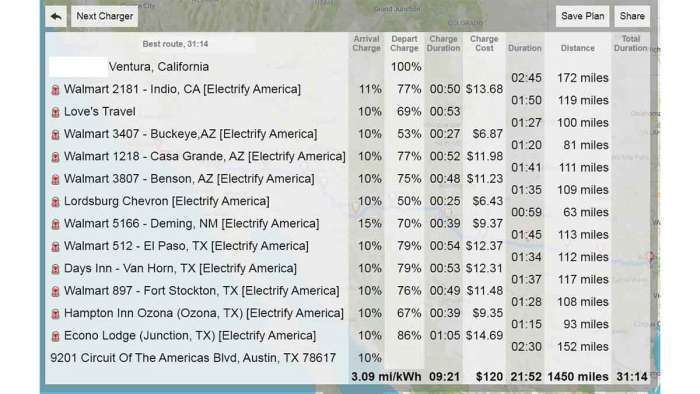 For illustration purposes, here is the trip plan provided by ABRP. At first glance, the route is very similar to what I had planned for myself in terms of stops, distances, driving times, and charging locations. ABRP recommended that I stop exclusively at Electrify America charging locations, which I would normally agree with; however, in the case of the Love's Travel Stop in Quartzsite, they are recommending an Electrify America location that still hasn't opened.

This trip is still over a month out, so it's possible that I will be able to use that site after all. However, for now, I have to plan around to use the EV Connect charger in Blythe.

The Chevy Bolt EV Is More Efficient
The first glaring issue with the ABRP estimate is that it is assuming far worse efficiency than I am accustomed to. While I do plan to leave Ventura County with a completely full battery, I don't expect to use 89% just to get to the Indio Electrify America charger. This is especially true with a slower average driving speed than I was anticipating in my own estimate. If I am able to average 70 mph driving while crossing through Los Angeles (wish me luck!), this leg would only take me 2 hours 30 minutes. At those speeds, I expect to see no worse than 3.4 mi/kWh efficiency, which would result in my using about 90% of my battery.

ABRP's 2 hour 45 minute predicted driving time, on the other hand, would mean an average driving speed of only 62 mph. As I demonstrated in my parallel drive with Alex Venz in his Tesla Model 3 LR, the Bolt EV should see closer to 3.7 mi/kWh efficiency under those conditions. At that efficiency, the Bolt EV would use less than 80% of its battery to complete this 172-mile leg of the journey.

The Chevy Bolt EV Is Cheaper to Charge
Another issue with ABRP's projected trip that immediately stood out to me was that their pricing for the Bolt EV on Electrify America chargers is way off. I realize that pricing can vary, but I didn't see an option for member pricing. In my case, as a member of the Electrify America network, I only pay $0.18 per minute to DC fast charge my Chevy Bolt EV. As I've broken down in another story, that works out to $0.22 per kWh or just over $0.06 per mile at freeway efficiency, so the $4.00 per month Electrify America membership fee can pay for itself in the first charging session. 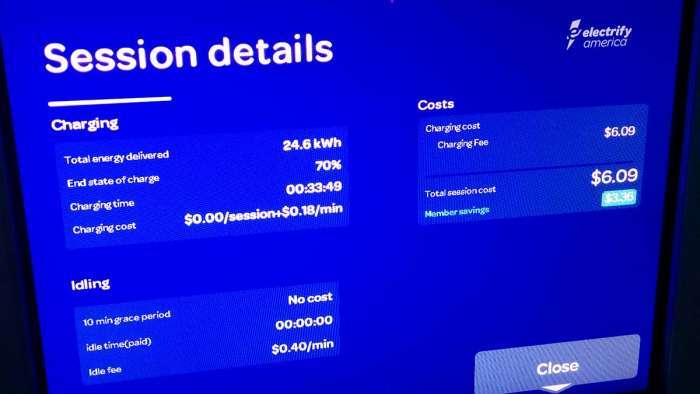 If ABRP's estimate of 50 minutes charging in Indio is correct, the cost of that session would be $9.00 rather than the $13.68 that they listed. In fact, if I apply the lower membership pricing to ABRP's projected charging time for the entire trip, I get a total cost of $101 rather than the $120 that ABRP predicted. If my own estimates for the total time spent DC fast charging the Chevy Bolt EV this trip are more accurate, my actual total cost for charging will be within about $5.00 of the cost ABRP predicted for the Tesla Model 3 SR+ using the Supercharger Network.

The Chevy Bolt EV Charges in Less Time
According to ABRP, my Bolt EV will require 9 hours and 21 minutes of charging to complete the 1,450-mile journey. For the most part, it appears that ABRP has fixed an earlier issue where they were grossly underestimating the Chevy Bolt EV's charging speed. At this point, if anything, ABRP might be optimistic, with one of their projected charging sessions resulting in an average charging speed of 57 kW, which is higher than the Bolt EV's peak charging rate of 55 kW.

The bigger issue I have with ABRP's estimated charging times ties back to their projected efficiency for the Bolt EV. While their stops and distances between stops are almost identical to my own planned trip, the amount of energy ABRP projects would be needed to complete those legs is far higher than what I have projected.

Electrify America has done a good job of spacing their early charger sites so that they are only about 100 to 120 miles between stops. This actually falls well within what I refer to as the Bolt EV's "subsequent charge range" (SCR). SCR is a term I use to describe an electric vehicle's range at the point its DC fast charging rate drops to less than half of its peak charging rate (essentially, SCR is a tool I use for identifying diminishing returns when using a DC fast charger). The Bolt EV's SCR occurs at between 65% and 70% battery, depending on internal battery temperatures, and because I typically see 3.5 mi/kWh at freeway speeds, I estimate the Bolt EV's SCR to be about 130 to 140 miles. 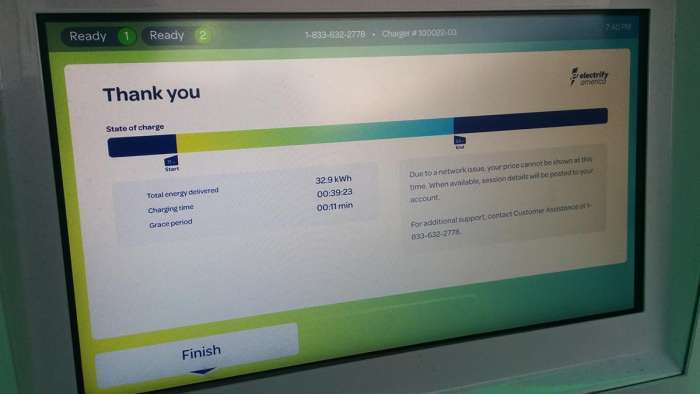 The shorthand for this is that I rarely charge past 65% on DC fast chargers, and on Electrify America's 150 kW chargers, the Bolt EV typically only takes 30 to 40 minutes to reach that point. That means that for most of these sessions where ABRP is instructing me to charge to between 70% and 80% (about 50 minutes to 1 hour), I will only actually be spending 30 to 40 minutes, or about 20 minutes less time per stop on average.

ABRP also does not account for any overnight charging stops unless they are inputted directly, but because I will be starting this journey after work (I typically restrict my driving to about 8 to 10 hours after working a full day), I plan to stop and sleep for the night. Just one overnight charging stop radically changes the dynamics of the trip. Not only does charging overnight cost no time (the time spent charging is a sunk cost as a result of getting a full night's rest), it also makes completely filling the battery a reasonable proposition, so it eliminates not one but two DC fast charging stops (effectively saving 1 hour to 1 hour and 20 minutes of typical DC fast charging time).

After accounting for the destination charging, my time spent charging on this trip would be at least 1 hour 20 minutes less than ABRP's 9 hours 21 minute estimate. However, I still feel that 8 hours is a pessimistic estimate. Even with being conservative, accounting for using a slower 100 A DC fast charger in Blythe, and charging up enough in Buckeye to compensate for a blocked or broken destination charger, I'm expecting the 435 miles I travel on the first night to require no more than 2 hours of charging. That's 15 to 20 minutes less time than ABRP projected.

ABRP Is More Accurate for Other EVs
I have heard from others that they prefer to have a more conservative estimate; however, I think that ABRP might be going overboard. I consider my own estimates to be conservative based on my experiences. However, by contrast, the charging models ABRP provides for the Hyundai Kona Electric and Tesla Model 3 SR+ appear to be more realistic and far less conservative than the model they provide for the Bolt EV. 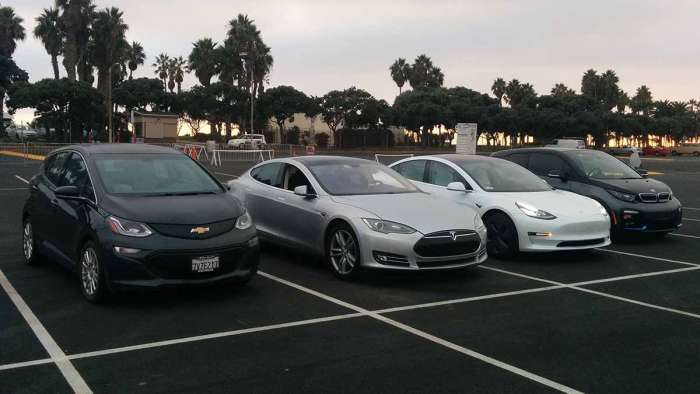 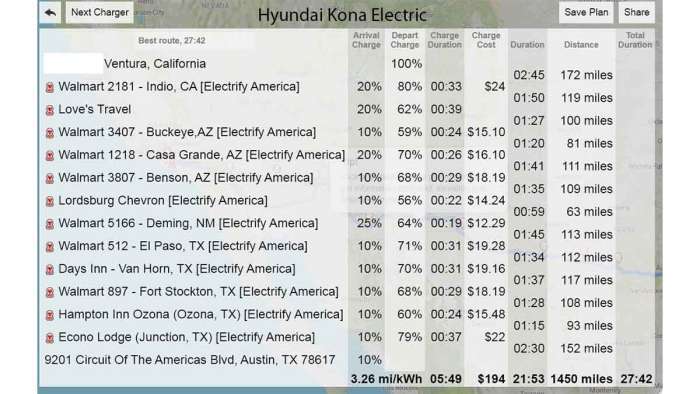 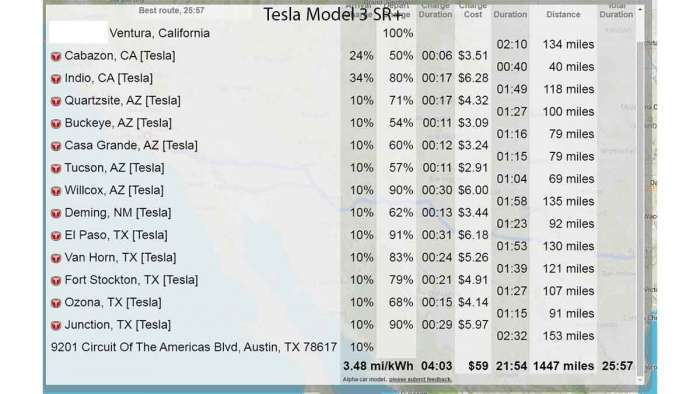 When looking at the trip plan for the Tesla Model 3 SR+, only two of the charging sessions are 30 minutes, with a majority of them being 17 minutes or less. Based on what I know from Tesla owners, that is actually a very accurate trip model for the Model 3, so again, I wonder why ABRP has such different results depending on which vehicle it is planning for.

Conclusion
Ultimately, I won’t know the trip times or efficiencies I’ll see until I actually do this trip myself, and when I do, I’ll be able to compare my actual results with ABRP’s predictions. A number of factors could change in the meantime as new chargers could come online and pricing structures could change.

Also, much of this drive will be through the Southwest during the rainy (and snowy) season, so it’s perfectly possible that weather brings my own results more in line with ABRP’s baseline predictions. Only time (and experience) will tell.

David wrote on January 3, 2020 - 10:27pm Permalink
Eric, during my Christmas break trip planning, I noticed ABRP was now suggesting Fast Charging to 63-65% at most all of the stops I scheduled. I attributed this to the increasing number of charging stations in my region, but it may have been a realization on their part of the issue you describe. I, too, find their efficiency estimate conservative, and routinely drop the reference consumption rate by about 10-15 kWh/km for most travel planning. Multi-day journeys are always an issue, and I usually end up bouncing between PlugShare to find hotels with charging stations, and ABRP for general route planning. I’ll usually create a separate plan for each leg of a journey.