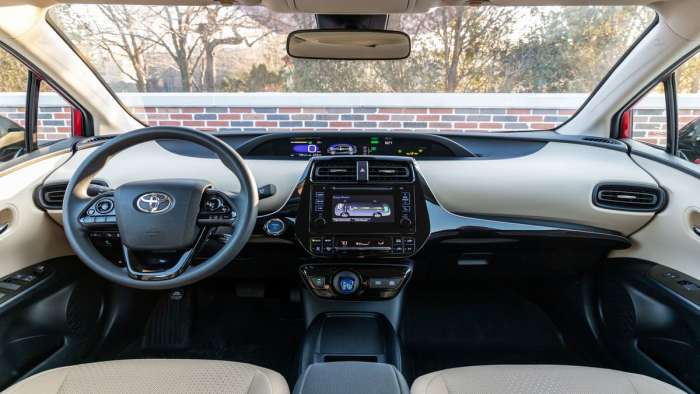 Why The Toyota Prius AWD-e Is The Best One Yet

The 2019 Toyota Prius AWD-e is a culmination of everything we love about the car, now extended into something safer and more capable. Giving each user more control, confidence and better MPG, are the the surface highlights. Prius has now extended into a market that will be giving current AWD models a run for their money.
Advertisement

As a class leader in hybrids, Prius owns a segment in the market other car makers only wish about. The 2019 AWD-e is aimed to keep that claim. Toyota is estimating that this new model could account for up to 25% of Prius sales in the U.S.

There are some really neat features that Prius has which help it achieve all round better fuel efficiency while utilizing a electric rear motor. This allows Prius to power the rear wheels on and off as needed up to about 43 miles an hour. Using this system we can have low speed all wheel drive which can be a huge benefit in wet and snowy conditions.

The front end has not changed and still offers great efficiency. The other options are really quite cool as well that I feel makes this Prius more luxurious than ever before. Here are some things you should know if you are considering purchasing one.

Interior and Exterior Additions To Prius

The AWD-e is the major update for 2019, but the fresh front end and rear really make this Prius stand out from the crowd. Some of the new features include head and tail lamps, accents around the steering wheel and shift knob. Toyota has also incorporated USB charging and a larger Qi wireless charging for those giant iPhones or Androids.

The AWD-e will only be offered in the LE and XLE. Several trim levels are now an option as before. L Eco, LE, XLE and Limited will also have two new colors including a Supersonic Red (sounds fast) and the Electric Storm Blue (which sounds futuristic to me).

Interesting here as well, that the AWD-e will be utilizing a the NI-MH or Nickel-Metal Hydride battery chemistry. I am sure since Toyota has seen the proven reliability of this battery that is why they are using it on the AWD models. The rest of the Prius line will be set with Lithium Ion, a new feature for some models starting in around 2016.

Toyota also has made sure that storage inside is large enough to carry even some of the craziest items (i have seen water heaters in these things) But also allowing for maximum storage capacity for those road trips we all know you plan to take.

Standard features will still include bluetooth, the Toyota Smart Key, Push Button start and others, while offering new features like adaptive lighting, stolen vehicle locator, and emergency assistance. What is neat about that, is you get it for three years as a trial subscription, so if you are leasing the vehicle that is a bonus you could get without having to purchase it. Prius also ToyotaCare, which is a complimentary plan, for two years or 25,000 miles, whichever comes first covering regular factory-scheduled maintenance, always helpful when finding less expensive ways to maintain your car.

Prius has a plethora of cool features embedded in the Toyota Safety Sense or (TSS-P). This system utilizes cameras and radar to help detect people, other vehicles and even lane markers as well. It also comes equipped with Lane departure assist, Dynamic Radar Cruise Control and Automatic High Beams. Pretty cool tech that shows how far Prius has come over the years, and how modern it now feels.

While I am personally not a fan of Entune, it has gotten better over the years. Toyota does really prefer to develop some things in house to give them the tech they want. New tech in the Prius includes a larger touch screen, 6 speakers, bluetooth and aux, coupled with voice recognition and backup camera, make this Prius feel inline with other car makers.

AWD-e has its own system indicator and is also seen on the energy monitor as well. The heads up display, now in color, make me think of the transition to color Television. It just feels right.

The 1.8L 2ZR-FXE has been a power plant for Toyota since 2010. While many important improvements have been made to help with it, Toyota must really believe in that engine. What else is new, is the transmission system that is still the Hybrid Synergy Drive but modified so it fits in tighter in the engine bay. This allows for the front end to have more of a point and aid in less drag.

I love the Prius in many ways. I have a second Gen with 250,000 miles on it. Still ticking away. I think that Toyota with its world class way of building hybrids stands as a testament to any naysayer about the progression of the auto industry. Thanks Toyota for building such a remarkable vehicle.

Watch how to check the MPG consumption on your Prius dashboard and click to subscribe to Torque News Youtube channel for daily Toyota and Automotive news analysis.

I hope that you have enjoyed reading about new Prius Technology. In the story tomorrow see how I look into oil consumption issues. Check out my other story 3 Top Tire Brands You Should Consider For Your Toyota Prius to find even more ways to make that fuel sipper go the extra mile.

See you in the next story where I am discussing why car enthusiasts and average car guys loathe the Toyota Prius.

Jacob Geertsen wrote on August 7, 2019 - 4:48am Permalink
Peter Neilson - you are a very clever human being....Finally perfect words written about Toyota and Hybrid tech. Btw. Akio Toyoda is a perfect example on, why the Japanese culture conquers electronics and cars to A+++ :-) Cheers Jake Copenhagen, Denmark
Dave Filicicchia wrote on August 11, 2019 - 10:59pm Permalink
I'm wondering if the new rear wheel drive can be retrofitted to a 2010 Prius. Or have they changed the frame and chassis for the AWD?
William R Ferrall F wrote on February 1, 2020 - 3:10pm Permalink
I also have a Gen 2 with 265k miles on it. Had to put some serious money into it over the years but it's generally very reliable and still cranks out 40 mpg still using the original battery and engine, which I think is amazing.