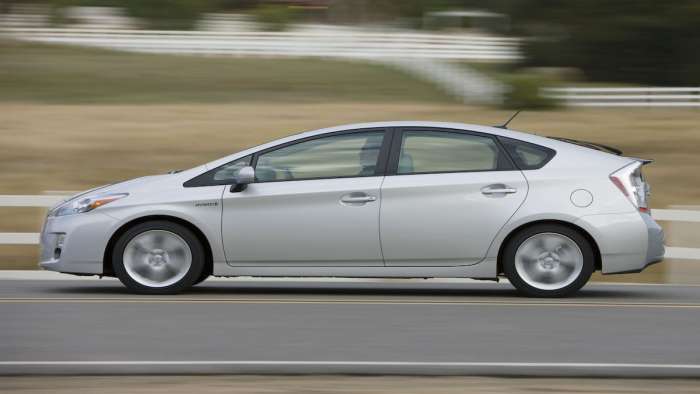 3 Secrets To Cheaper Maintenance On Your Toyota Prius

As automobile consumers we hear the word “dealer” and instantly think where we can get the best rate to refinance our house. It is obvious to most, that almost anything that comes from the dealer also comes with a price tag to match. Here are 3 secret options that will work for your Toyota Prius and help you save big.
Advertisement

I am a huge proponent of working on my own cars. I have been doing this since I bought my first car. I learned how to change oil early on. I also did small things such as air filters, washing and vacuuming, which helped me save a lot of money, and learn a valuable skill set.

This desire to do things myself really hit me hard when I came up against a problem I could not do and had to pay someone for. It was a great time in my life looking back, because it drove me to learn how to fix more advanced problems on cars. This not only led me down a path of saving loads of money, but I was able to explore why stuff costs so much.

I want to give you, free of charge, some of my knowledge I have spent a lot of hours on learning what are acceptable and quality substitutes for your Toyota Prius. Here are 3 fluids I researched that can save you some money and keep you driving just as long.

ZEREX - The other pink coolant

When I was working for a Toyota dealer (who shall remain nameless at this time) we had an amazing Valvoline rep who could sell us on anything that they came out with . Zerex antifreeze/coolant was one of those fluids. When the automotive industry started changing cars to have longer maintenance intervals, one thing they did was have better coolant/antifreeze that lasted longer.

This cut down on the costs of maintaining the cooling system and made the car over all more affordable to drive. One of those coolants that was first adopted was General Motor’s Dexcool. It was a new formula that was better for aluminum engines and did not break down as quickly as standard ethylene glycol, or the green coolant most old timers know about.

Other car manufacturers like Toyota quickly jumped on board and were using their version not long after. It was around 2000 that Toyota developed a better coolant called Toyota Super Long Life Coolant. This coolant was developed with Prius in mind to help cut down on the time interval required for change while also providing maximum protection against cooling system degradation.

The issue is that it costs like $30 dollars a gallon. OOOF. If you are doing Prius maintenance on the engine cooling system and the inverter you are going to need about 4 of those. Not to mention if you are not doing it, you also have the labor to install it as well. This can be a costly thing to do which is why people opted out of it until they had to do it.

There is a better solution though, and that is Valvoline Zerex Asian Coolant for Toyota, Lexus, and Scion vehicles. It is the exact same formulation as the Toyota stuff, but half the cost. I use this in everyone of my Toyota vehicles including my beloved 2007 Prius. So, if you are the do-it-yourself guy like me and you own a Prius, this is a great option for you to save money and still get the “factory result you are looking for.

Look, I am not here peddling Valvoline products, but I have used them quite extensively over the years and can speak for the quality. Fluids are one of those things that you should be extremely cautious about when installing something other than the original equipment. Installing the wrong fluids can damage major components such as your engine or transmission and that can cost thousands of dollars in repairs.

Companies like Valvoline have invested millions to ensure they are doing what is right for your vehicle, and are required to produce public documents that show what fluids are compatible with what the manufacturer specifies. This means that you can get the same quality of ATF for a fraction of the price, making your Prius even more affordable.

Wait, this is not a Valvoline product. You would be surprised. You see here is a dirty little secret. The parent company for Valvoline oil products is Ashland Oil. Guess who makes the NAPA house brand engine oil, yep Ashland oil. This stuff is basically the Valvoline Synpower high quality synthetic motor oil your Prius should have in it. Best part, it is at least $2 dollars cheaper (sometimes more if it is on sale) than the synpower equivalent.

This oil meets all the API standards and requirements set forth by Toyota, to ensure that your Prius is getting exactly what it needs to help it perform and get the best life out of it possible. If you are also a really “green” driver and want to do a little more for mother earth, Valvoline also makes a recycled engine oil that reduces the need to create new oil. This helps reduce engine oil production and save precious resources.

I hope that you have enjoyed reading ways to keep your Prius health and doing it for less. Check out my other story 3 Top Tire Brands You Should Consider For Your Toyota Prius to find even more ways to make that fuel sipper go the extra mile.

Lisa Weede wrote on October 4, 2019 - 11:47am Permalink
Thank you Peter for the video. I was having IMA light on some time ago and took car to dealership. They said I had 2 bad modules. Wasn't sure what that was but you just explained it. They wanted to $$$$ spend and replace. That was 2 years ago. I'm still making the hybrid work by rebooting computer. So far I still have 12 volt working without issues.
Kerry J Davis wrote on February 14, 2020 - 11:58pm Permalink
Thank you for your article on ways to save on Prius maintenance. Would Maxlife atf work in the later generations of Prius? I understand the Gen 2 has a very robust cvt and don't know if later generations are as tough. One more question: how often would you change the Maxlife? Every 50k...? Thank you.
Bangash wrote on April 23, 2020 - 3:57am Permalink
Couldn't reach page with tips for prius hybrid battery and the equipment used for its maintenance
Kifleyesus Abe wrote on May 14, 2020 - 4:19pm Permalink
Is this works hybrid camry
Patrick wrote on March 15, 2021 - 3:44pm Permalink
I checked with Valvoline re Zerex Asian coolant. They tell me it’s correct engine/radiator coolant for Prius 2015, but that it is not a suitable coolant for the inverter coolant as that requires an EV version in a hybrid car. Are you aware of this? What do you advise/ recommend if this is so in your opinion?
Jeff Richter wrote on November 27, 2021 - 4:00am Permalink
Even more affordable * 1. All Walmart here SuperTech Advanced Full Synthetic oil 20,000 mile promise with its counter part Oil Filter MP10358 for me. $19 oil and $3 filter $22 got you 20,000 miles. 2. For Coolant Also Supertech Premix 50/50 Asian cars pink fluid 150,000 mile (Some say up to 250,000 mile) POAT mix $10.58 a bottle, get 3 for total covers Inverter and other engine coolant bay . ATF i agree on Valvoline. Dextron 3 Mercon 6 YOU ARE WELCOME. Bam.