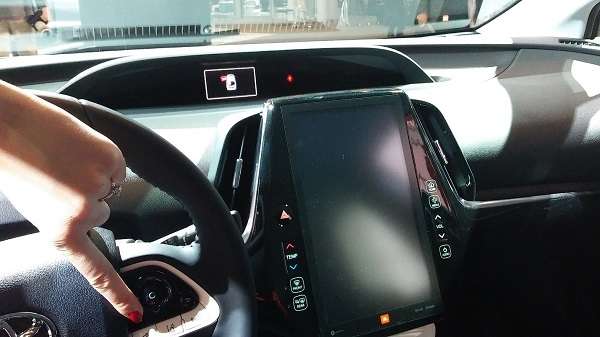 Toyota Prius owner's rationale on how Prius owners may save up to 50 percent on fuel costs, depending on their driving.
Advertisement

Today was Press day at the NY Auto Show and I had a great opportunity to walk around and review all the Electric Vehicles (EVs) and Plug In Hybrid Electric Vehicles(PHEVs). Since I cover all cars with a plug for Torque News, it was great to check out the Prius Prime. The one pictured here was a wonderful red color and the car will be an upgrade for any Prius Owner. As someone that owns three Toyota Prius cars, I would consider upgrading to this car. As you may or may not know, Toyota Prius drivers are very likely to purchase another Toyota Prius vehicle. This type of loyalty is great for Toyota as they have expanded the Prius line and I would consider the Toyota Prius Prime the flagship.

The opportunity for Toyota Prius owners is to save money on fuel costs. Here is my rational. The average American drives 40 miles per day. That is the exact number of miles of EV Range given to the Chevy Volt when it debuted. The stated EV miles given to the Prime was 25 Miles of EV Range and that means the car will cover 62.5% of the average daily miles driven by Toyota Prius drivers if you consider Prius drivers average. Now I could argue that Prius drivers are not average because many people purchase the Prius because of its high miles per gallon rating. So maybe Prius drivers drive further than the average daily driving of most Americans. I have no way of figuring that out at this point but lets for the sake of argument say that Toyota Prius drivers average miles driven is average.

So at $0.04 and $0.05 per mile how can a Toyota Prius owner reduce his fuel costs by 50%? All I have to do to do that is to lower the cost per mile to $0.02 and $0.03. So how can you do that with a Prius? You can upgrade to a Toyota Prius Prime. With the average cost per EV mile of $0.01 to $0.03 (depending on your cost of electricity in your neck of the woods) if you swapped more of your average daily miles to electric vs gas, you would be saving in the neighborhood of 50% on your cost per mile traveled. With the average cost in my Prius being anywhere between $2.09 per day if I’m an average American driver that cost could be reduced to $1.04 per mile if you have the best rate on Electricity. I realize there are a lot of variables in this analysis however I believe you get the picture. An EV miles is almost always cheaper than a gas mile. That is just the way it is.

Now things can happen that would make this an impossibility. Tax Policy could change in your state. EVs and PHEVs could be taxed differently than they are today with simple legislative action. I hope this doesn’t happen however I’m a realist and know that many states need new revenue streams and cars and gas taxes are an easy one targets for tax gap policy.

If you would like to review my previous articles on this subject you can review them here.

Here is a brief intro to the above article:
In 2010 I was offered the chance to be a subject matter expert in a special program offered by Toyota to test and show their soon to be released 2012 Plug In Prius. One snowy day in January 2010, the car arrived for me. Me and my whole family where extremely excited to say the least. My wife and I and a couple of kids hoped in the back and we went off for a test drive. It didn’t have any EV charge as it had just arrived.

Here is another article which shows that the Prius Prime’s sales numbers are slipping.

The reason for this is all about the number of EV miles and total vehicle miles traveled. If you view the category as Plug In Hybrids, I would definite the segment as including Toyota Prius Prime, Ford CMax Energi and Ford Fusion Energi, Chevy Volt, and Audi A3 eTron, Kia Optima Plug-In Hybrid and a few others. The ranking of these by EV miles puts the Chevy Volt on the top, the Prius Prime next and the rest behind them in terms of EV miles alone. The sales ranking in the article above combines the markets with Tesla in the mix and that is a pure EV without a gas engine in any of their other offerings.

BMW has their Performance Line and stay tuned for more articles on this product group to follow in future articles by me. I was attending the NY Auto Show today during the press event and was able to view many of the Plug In Hybrid solutions that BMW has created.

Additionally, one major story from the NY Auto Show today was the lack of pure EVs at the show. Word on the street is that the Clean Air Standards could be disappearing in the future if the federal government decides to take away California’s waiver to regulate it’s own air resources. There potentially looks like an announcement regarding the many states that are involved with adhering to the California Air Resources Board oversight and news could be coming out tomorrow regarding the dispute between the Federal Government and the CARB board. Stay tuned on this one and there should be more news to follow on this tomorrow.