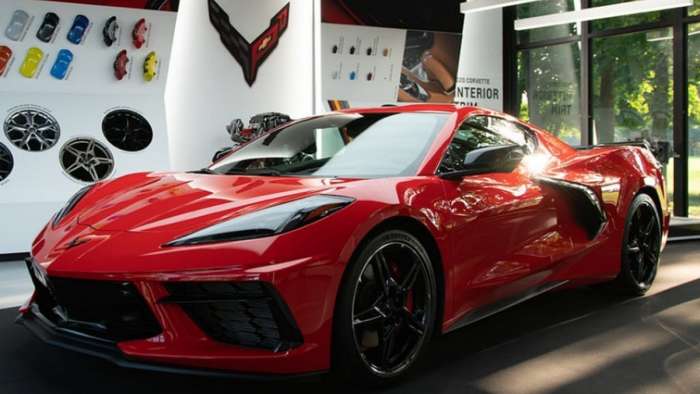 2020 C8 Corvette Performance Specs Leaked Online And They Are Impressive

We are finding out information about the 2020 C8 Corvette little by little but this time it was the official performance specs of the car that happened to get leaked by accident at a local Corvette show.
Advertisement

Here we are only a little over a month since the official reveal of the 2020 C8 Corvette and there are still loads of unanswered questions. Every little bit of information is like a payday to us Corvette enthusiasts but we hit the jackpot with this latest bit of information. At the local show "Corvettes at Carlisle" there was a picture taken by a fellow enthusiast that shows all of the performance specs for this car. Two of the big unanswered questions about the performance was, curb weight, and quarter mile time. Well, we got answers for both.

Keep in mind that the specs listed here aren't official or even necessarily final. You can get a good idea of what the performance will be, but there is still some final work to be done before official numbers are released to the public, however, I am fairly certain the numbers here will remain unchanged once the official statement comes from GM.

Performance Specs On The 2020 Corvette:

These numbers come to us early due to a fellow enthusiasts dedication. GM did not officially release these numbers but based on the information I am seeing here I would say it's legit and we'll get an official statement soon. The numbers are impressive for the "base" model C8 Corvette Stingray. I've said it before and I'll say it again, this car is a lot of bang for your buck and these numbers solidify that statement. It is obviously built as a drag strip dominator as well due to the fact that it can run the quarter mile in 11.3 seconds. That's obviously not the fastest I've ever seen but for the first of at least 3 rumored iterations of this car, it's very impressive.

GM obviously intends on making the Z06 and likely a ZR1 model for this car soon and with these upper tier models the performance goes up as well so these numbers would only get better. I think it's fair to say that the C8 Corvette has competitors scared. Here are the rest of the performance numbers: 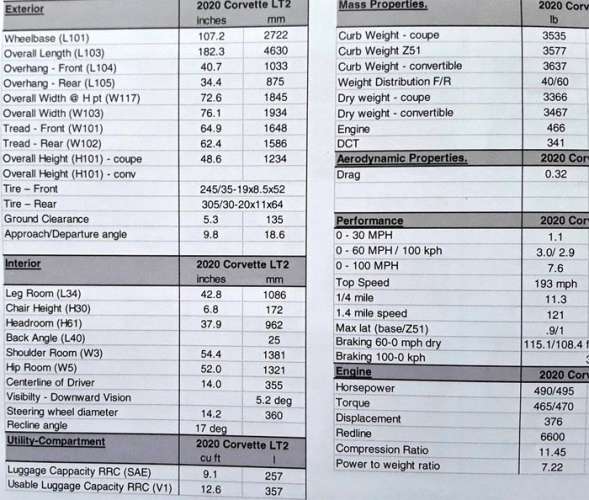 The only statistic I am disappointed in is the weight of the new Corvette. Almost 3,600 pounds is on the heavy side and I feel the car could have been even better at ~3,100 pounds. How this will affect the car is to be seen but GM seems to be doing everything right so I'm not worried about it. After seeing the car in person at the Carlisle show this year, I fully understand why this new Corvette is making waves. Based on comments Tadge Juechter made at the Carlisle show this year, we will be seeing reviewers and auto journalists in this car very soon so expect all of your questions to be answered then.

See you in my next story where I am showing why the 2020 C8 Corvette has different sized side view mirrors.

DON BJORKLAND wrote on August 27, 2019 - 9:17pm Permalink
Not sure why all the info that was in other pictures was not shared, like the DCT transmission gear ratios and the rear gear ratio... that is very interesting also. You have my dedicated enthusiast permission