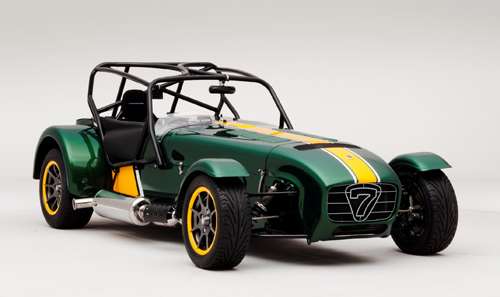 There are, it seems, two Lotuses, or Loti if you prefer. One is Group Lotus, the direct continuation of the firm founded by British sports car and racing genius Colin Chapman. The original Lotus Seven debuted in 1957 and was so named because it was (theoretically) the seventh model Lotus had built.

The Lotus Seven was a bare essentials sports car, one that sport car enthusiasts say defines the breed but one which Lotus didn't want to build after 1972; it was moving on to more modern cars. So Caterham bought the rights and has been building the Seven, albeit evolving but remaining the same. Last year Caterham built more than 500 cars.

Caterham was bought by Corven Ventures from the founding Nearn family in 2005 and has continued sales and development of the car since then.

The other Lotus is Team Lotus Enterprise, a new-for-2010 Formula 1 race team licensed to use the Lotus name.

Meanwhile, Group Lotus, the manufacturer of Lotus automobiles, is reentering Formula 1 by joining with Renault to form Lotus Renault to contest the 2011 world championship. Group Lotus wants exclusive use of the Lotus name, and Team Lotus doesn't want to give it up. No doubt the legal contest will be as hot at action on the race track.

Against that background, Team Lotus Enterprise announces that it has agreed to purchase Caterham from Corven.

According to a press release from Team Lotus Enterprise, "The acquisition of Caterham Cars by Team Lotus Enterprise will not only signal the continued development of the legendary Seven, but will provide Caterham with the platform to apply its philosophy of 'adding lightness' to exciting models for the 21st century."

Team Lotus Enterprise, owned by Tony Fernandes, Kamarudin Meranum and SM Nasarudin, will keep in place the current management team at Caterham Cars, headed up by managing director Ansar Ali. Plans for Caterham itself are expansive.

"We will remain entirely true to the philosophy that we, as custodians of (Colin Chapman's) motoring concept, have protected for nearly 40 years," Ali said in a press release. "However, the acquisition of the company by Team Lotus will allow our existing management team to take Caterham's core spirit of pure driving enjoyment to a hitherto un-served audience."

The first fruit of the new ownership at Caterham Cars is specially trimmed Team Lotus Special Edition Sevens. A run limited to 25 cars for the U.K. and another 25 for the rest of the world will have the famous Lotus green-and-yellow color theme. Inside, the Team Lotus cars will have a plaque with the signatures of Team Lotus Formula 1 drivers Jamo Trulli and Heikki Kovalainen. A "customised tour" of the Team Lotus Formula 1 factory in Hingham, Norfolk, England, is included, as is a Seven history book signed by chief designer Mike Gascoyne. And all this for only an extra £3,000 (about US $ 5,000) over the usual price of a Caterham Seven.

The Caterham Seven is not available new in the United States as a completed car, but a Caterham Seven can be acquired as a complete knock-down kit, or "CKD", for self-assembly, or as a rolling chassis needing only installation of an engine. Either way, the legal status of the car is a "kit." More information is available from Caterham USA (uscaterham.com).