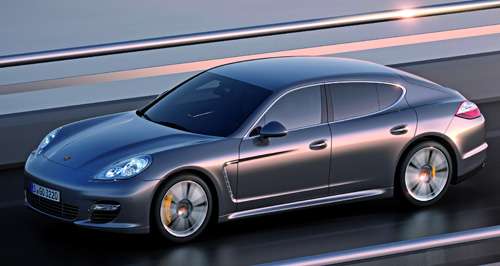 Have a need to take three of your closest friends to sixty miles per hour in a mere 3.6 seconds? May we suggest the Porsche Panamera Turbo S, to be debuted officially at the New York International Automobile Show on April 20 though Porsche released details and preliminary photos today.
Advertisement

Adding "S" to the Panamera Turbo comes primarily from two modifications, changes to the engine control electronics and using titanium-aluminum turbine-compressors in the 4.8-liter V-8's twin turbochargers. The turbos' lighter internals can spool up more quickly, improving "the engine's agility," according to Porsche.

The result is maximum horsepower of 550 horsepower, a ten percent increase over the 500 horses of the regular Panamera Turbo. The torque peak goes from 516 lb-ft to 553 lb-ft. By using an overboost function, torque can be increased temporarily to a thumping 590 lb-ft when in "Sport" and "Sport Plus" mode of the Sport Chrono Package Turbo, standard on Panamera Turbo S.

Porsche claims a top speed for the Panamera Turbo S of 190 mph while not changing the EPA fuel economy rating of 15 mpg city/18 mpg highway (though official EPA numbers won't be out until shortly before the car goes on sale in North America).

As one might expect, the most potent member of the Panamera line comes with all the goodies, including PDCC, Porsche Dynamic Chassis Control, an active anti-roll system that helps keep the car level during hard cornering. Porsche Torque Vectoring Plus (PTV Plus) provides a variable torque split to the rear wheels, directing power to the outside wheel with an electronically-controlled rear differential lock. Porsche also throws in a sports exhaust system, speed-sensitive Servotronic steering and the Sport Chrono Package Turbo that not only includes the overboost function but retunes the suspension when in "Sport" mode.

It's not all muscle, however. A new upholstery color combination of black and cream (floating to the top, no doubt) is available for the standard bi-color leather finish, with agate gray/cream added later this year as a Turbo S exclusive. Agate gray will be available on the Panamera Turbo S.

So that the Porsche Panamera Turbo S won't be lost on the casual observer who doesn't observe the upgrade to the model badge on the rear deck, Porsche has made external alterations as well. New 20-inch Turbo II wheels with an increased track at the rear, side skirts from the Porsche Exclusive catalog and an adaptive four-way extending rear spoiler differentiate the Panamera Turbo S from lesser versions of Porsche's grand touring four door.

Though on display at the New York show, the Porsche Panamera Turbo S won't go on sale until later this spring. The good news is that we'll get it in the U.S. just as soon as everywhere else in the world.

Prepare to shell out $173,200 plus another $975 for destination. That's $37,900 more than the Panamera Turbo, or $758 per horsepower (and Porsche throws all that other stuff in for free). Comparison shoppers will note that the four-seat V-12 powered Aston Martin Rapide sells for $199,950 and makes only 470 horsepower. Aesthetics is, ahem, another matter. But appearances aside, no one but Stuttgart makes anything like the Porsche Panamera Turbo S. See you in New York.