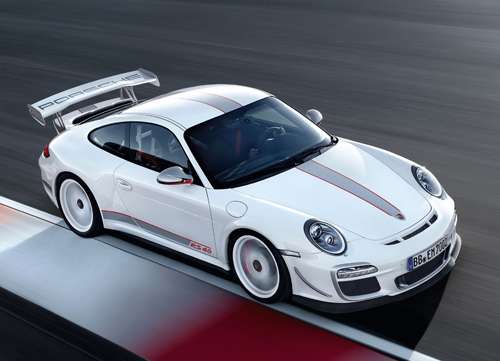 The Porsche 911 has always been known as a giant killer, extracting a huge amount of power from a small displacement engine, but is some is good, more is better. At least that is what's behind--literally--the largest engine ever in a Porsche 911, the 911 GT3 RS 4.0 limited edition.
Advertisement

Only 600 cars will be made for distribution worldwide, the Porsche 911 GT3 RS 4.0 is not, at 4.0-liters, only the largest Porsche engine ever, but Porsche engineers also extracted the most horsepower-per-liter ever--125 hp per liter--from a naturally-aspirated Porsche flat-six engine. And it's not just size that generates that 500 hp. The 4.0-liter reaches that peak output at a zinging 8250 rpm. Expect to use, however. Maximum torque is 339 lb/ft way up at 5750 rpm.

To hang together at those speeds, the engine has forged pistons, connecting rods of titanium and as Porsche notes, "the crankshaft has been lifted unchanged from the 911 GT3 RSR race car." The GT3 RS 4.0 is available only with a six-speed manual transmission.

Porsche has tweaked the suspension with bits "typically encountered in motor racing", and Porsche has gone after weight like a politician cutting pork out of the budget. No, wait. Just the opposite. The Porsche 911 GT3 RS 4.0 uses carbon fiber bucket seats as well as carbon fiber front fenders and luggage compartment lid. Even the carpets have been "weight-optimized."

The Porsche 911 GT3 RS 4.0 will stand out from ordinary Porsches with its wider track, low ride height, large rear wing with side plates, central twin tailpipe and assorted aerodynamic appurtenances. Air deflection vanes, often called "flics" or dive planes--mounted on either side of the front bumper are on a production Porsche for the first time. "They create increased downforce on the front axle," says Porsche, "and together with the steeply inclined rear wing, proved aerodynamics on par with its performance capabilities." That prose translates into 426 lbs of downforce at the 193 mph top track speed.

Speaking of the track, the 911 GT3 RS 4.0 has recorded a 7 minute 27 second lap the Nurburgring-Nordschleife, a very impressive number at the current yardstick of sports car performance. The almost-a-race car can hit 60 mph from a dead stop in only 3.8 seconds and with track optimized gearing reach 124 mph (200 km/h) in under 12 seconds.

The only way to have a 911 GT3 RS 4.0 in anything but Carrera White would be to repaint it yourself, though most Porsche fans would consider that a travesty and it wouldn't help the resale price of a car with a suggested retail price starting at $185,000, destination not included. Be patient with that checkbook, however. The Porsche 911 GT3 RS 4.0 won't go on sale in the U.S. until late 2011.