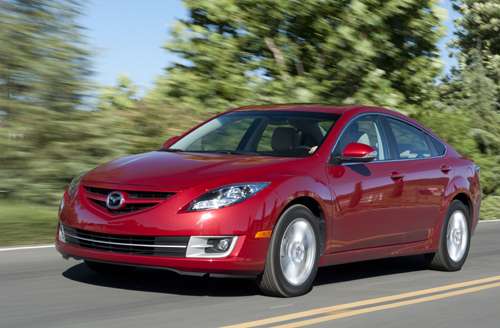 Mazda will move Mazda6 production to Japan, but not soon and sales will continue

Contrary to rumors, the Mazda Mazda6 isn't going away, but it is going away, or at least it will be coming from far away. Mazda North American Operations announced today that the next generation of Mazda6 for North America will be built in Japan rather than the AutoAlliance International (AAI) factory in Flat Rock, Michigan. A Mazda representative, however, flatly denied rumors that the Mazda Mazda6 would be dropped from the North American market.
Advertisement

"(A)s a part of ongoing efforts to increase global manufacturing efficiencies", Mazda will transfer production of the Mazda6 sedan from AAI to the company's Hofu Plant in Yamaguchi prefecture, Japan.
"Currently, production of the Mazda6 (known as Atenza in Japan) exists in three locations: at our Hofu Plant in Japan, AutoAlliance International (AAI) in Michigan, USA, and at FAW Car Co., Ltd. in Changchun, Jilin province, China. Our intention is to transfer production of our next CD-car for North America from AAI and consolidate it at Hofu in order to improve production and investment efficiencies and optimize our business," said Takashi Yamanouchi, representative director and chairman of the board, president and CEO of Mazda Motor Corporation in Japan.

Yamanouchi said that the decision was made "after carefully assessing all risks and opportunities, including global needs, changing demand in North America, and exchange rate exposure."
There had been some speculation that Mazda would drop the Mazda6 from the North American market in light of disappointing sales for Mazda's midsize sedan. Mazda North American Operations spokesman Jeremy Barnes affirmed, however, that the Mazda6 would positively continue as a part of Mazda's lineup.

Barnes declined to say when the transfer of production would take place. However, the first generation ran from 2002 to 2008. Assuming the same seven year product cycle would place the end of the current generation of the Mazda6 after the 2015 model year.

As to what happens to or at the Flat Rock facility has not been decided. Said Yamanouchi, "...we are committed to working with Ford, our joint venture partner in AAI, to identify potential future opportunities for the plant. Mazda and Ford have enjoyed a close relationship for over 30 years. We have collaborated on projects where there are mutual benefits, and both companies remain committed to continuing this strategic partnership."

In addition to the Mazda Mazda6, the Ford Mustang is also built at the AAI factory in Flat Rock. Mazda noted that since it began producing cars at Flat Rock in 1987, more than 1.7 million Mazda vehicles, including the Mazda MX-6, Mazda 626 and Mazda6, have been built there. More than 500,000 of the Mazda6 have been built there since 2002. Whether production of another Mazda is shifted to Flat Rock or Mazda sells its interest in the AAI facility is much to early to have been decided.