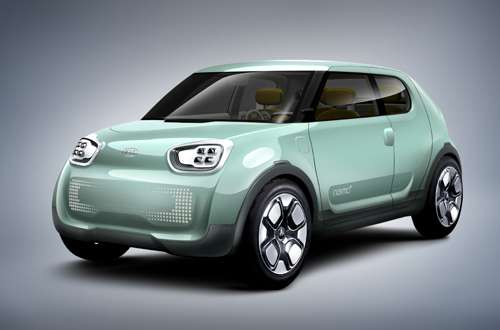 Kia ups its ante in the electric vehicle poker game by introducing a new battery electric concept vehicle at the Seoul Motor Show. Called the Kia Naimo, the new concept has boxy styling reminiscent of the Kia Soul.
Advertisement

The Kia Naimo concept, in fact, gets its name from the Korean word "Ne-mo" (pronounced "neh-mo"), which is Korean for "square shape." Intended as a compact crossover utility (CUV), the B-segment Naimo packs a lot of utility into a small space. It's only 153.2 inches long but has a 104.2 inch wheelbase. There's little front or rear overhang but with a (relatively) long distance between the wheels, the Naimo can make the most of what it has.

The twin-pack 27 kWh battery is placed under the trunk floor. The lithium-ion polymer battery technology pioneered by Hyundai comes in flexible sheets and can make better use of available space than the conventional rectangular battery pack.

The Kia Naimo has a PMSM (permanent magnet synchronous motor) electric motor rated at 107 horsepower but 206 lb-ft of torque, which should give the small concept rather sprightly acceleration. Kia claims a top speed of 93 mph.

Kia says that the Naimo will go 124 miles (200 km) on a full charge. Recharging to 80 percent of capacity takes only 25 minutes, but that's under a 50 kW quick recharging cycle. Under a "normal cycle"--Korea has 220v as standard current--a full recharge takes five and a half hours.

Of course, as a concept vehicle, the Kia Naimo has its share of novel features, including wipers replaced by a high-intensity air jet at the base of the windshield to blow dry the windshield in what sounds to be very battery draining and probably loud, too. The Naimo also does without a B-pillar, the back doors rear-hinged for what Kia says is for ease of access. More likely it's because it's easier to see inside when the car's in an auto show turntable.

Kia says the interior was designed "to evoke a strong sense of tranquility." Handcrafted Korean oak trims the door panels and the entire floor, and Korean "Han-ji" paper is used for the headliner. Whether or not it's for tranquility, the Naimo has a TOLED (transparent organic light emitting diode) storming display instrument panel and naturally full connectivity. There goes tranquil.

The Kia Naimo is the third battery-electric concept vehicle, following the Venga, a B-segment MPV introduced at the Geneva auto show, and the unconventional POP which made its debut at the Paris show.