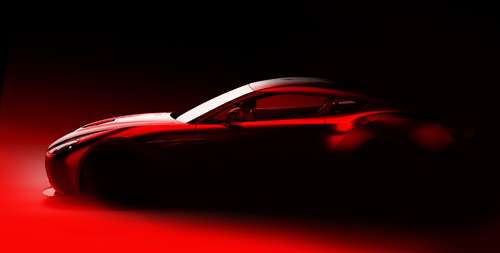 If the subjects were people, it would make good supermarket tabloid fodder, but this time it's Aston Martin and Zagato: they're back together again and working on another project to be revealed at the Ville D'Este Concours and shortly thereafter make its racing debut at Nurburgring.
Advertisement

In an announcement today, Aston Martin revealed little about the collaboration with the Italian design firm Zagato, deferring details until the yet unspecified vehicle breaks cover at the May 21, 2011, event. The car will be raced at Nurburgring later in the month.

Aston Martin competes in different racing classes, and the British car maker didn't specify which model would receive the Zagato treatment. The rendering provided is generic Aston Martin. A good thing but not very specific.

The new project, however, marks the 50th anniversary of the first linkup between the Italian and British companies. In 1960, Aston Martin went to Zagato for a special lightweight version of the Aston Martin DB4GT, counting on Zagato's gift for making fast and light cars.

Aston Martin displayed the result of Zagato's efforts at the London Motor Show in late 1960, and then began taking orders and started production of the car that would be known as the Aston Martin DB4GT Zagato. Nineteen were built, three of which were special lightweight racing versions that were raced successfully by legendary drivers including Jimmy Clark and Roy Salvadori.

More recent collaborations between Aston Martin and Zagato include the 1986 Aston Martin V8 Vantage Zagato for the 25th anniversary of the DB4GT Zagato, followed by the convertible V8 Zagato Volante.

The Aston Martin DB7 Zagato debuted at the Paris Motor Show in 2002, and through 2003, there were 99 built for sale and one kept by Aston Martin. Zagato then built another batch, though a true roadster with no top, built expressly for Florida and California.

Aston Martin will test reaction to the forthcoming Aston Martin-Zagato model at the Ville D'Este Concours. Said Dr. Ulrich Bez, chief executive of Aston Martin, "...it is appropriate to explore a modern collaboration."
Actually, Dr. Bez, Aston Martin and Zagato have already been doing the collaborating thing. The object is not "if," it's how many. The when would be a year from now.

xlpharmacy.com wrote on August 19, 2011 - 11:52am Permalink
I love this automobile. I got to be honest, I have absolutely no knowledge on the topic, but I can appreciate a good and beautiful car when I see it. Well, I guess I will have to conform and just watch it on the screen, because that car has to be really expensive, especially now, after this collaboration with Zagato.