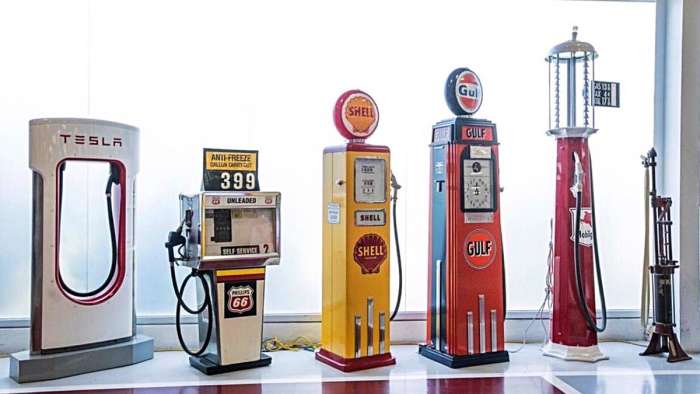 While we will still have gas stations in 5 years the number of them closing the fuel pumps and turning into convenience stores, such as Walgreens is going to increase dramatically.

Fueling stations in the past could raise and lower prices seemingly at will, and unless consumers were making their own biodiesel (not recommended) at home they had no choice but to pay high gas prices.

Recently Tesla increased supercharging prices while Shell has partnered with Greenlots to offer EV charging at Shell Stations. These are moves to profit on the upcoming revolution in powering vehicles. There is profit in DC fast charging because the country needs additional Superchargers and DC fast chargers as the fleet of electric vehicles grows. Although after the initial growth phase of fast chargers this fast charging profit will be limited by common motorist not oil elitist. (Also see why Toyota suddenly partnered with Panasonic on EV batteries).

Why will the new “energy” pump become such a disruption? The disruptive weapon will become small home and business charging. Common motorist will limit the profit of DC fast charging by simply choosing to charge more at home, and or share charging with friends, families, and small businesses who want your business by allowing free charging. Apps such as PlugShare increase the ability to easily peer-to-peer charge.

Everyone loves free, hence why more commuters at Tesla superchargers are older Tesla models with free supercharging. As free disappear at the superchargers and DC fast chargers increase prices motorist will counter with free home charging. For the most part no one places a gas or diesel fuel pump in their garage. No most motorist can have unlimited and free energy (after the initial investment) for the life of their home.

After a $4500, 3000-watt solar system investment, motorist will have unlimited free energy fueling of electric cars. This will severely limit and hamper the ability of traditional gas fueling stations to convert to DC fast charging and charge an exorbitant amount of kWh for energy. This is a great disruption because it puts power from the hands of oil elitist into the power for the common motorist with free unlimited energy.

Offspring disruptions
Once motorist realize the potential savings over 20 years, upwards of $60K in fuel alone. The shift in demand for housing types and prices could change. Motorist could shift the demand for apartment and condo living to single family homes. In turn decreasing apartment values and increasing the demand for townhomes and traditional homes with built in fueling capability.

Having a garage with built in free fueling capability could become the largest motorist commodity.

Tesla, Shell, Greenlots, and Walgreens do not sponsor or endorse this article.