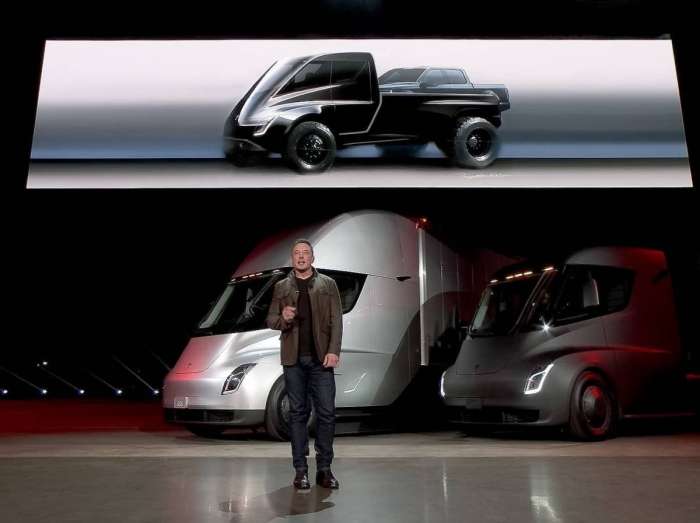 Tesla may introduce a Ford F-150 pickup truck killer by 2020. The EV truck field is still open to the introductions of bold and courageous electric pickup trucks. But is Ford's F series hybrid the remedy or antidote to a revamped proposed Tesla EV Pickup truck?
Advertisement

Ford Motor Company’s recent pullout from their portfolio most of the passenger cars they sell in North America, has all the car companies rethinking where they are headed and even what they stand for. Many of them are now recognizing that they aren’t good car builders as they are better at making some kind of truck. Many of them see that Americans being less turned on to sedans and smaller cars isn’t necessarily just a Ford phenomenon. It’s also becoming an American car phenomenon, and they point to SUVs and CUVs as the reason.

But trucks also play an important part of this equation. While the German brands bring their pickup trucks to global markets recently, Tesla is deciding where it should go next into the truck utility market after the Model Y crossover launches hopefully by 2020.

Tesla CEO Elon Musk has been talking about an electric tractor or pickup truck for over a year now. He recently had a discussion with his Twitter followers a revised vision of what that pickup should be. Here’s the highlights according to TheStreet.

A recent May earnings report seemed to cool Musk’s heals for any new project when the company realized it just doesn’t have the money not even to launch their proposed electric truck tractor that the packaged delivery services went crazy for. Months ago we heard from Musk an idea of a vision of what a Tesla Pickup truck should be like and it seemed to be based on the Tesla Semi: “a pickup that picks up.”

The new recent Twitter based vision of an electric pickup truck seems to be aiming less at a GMC Topkick or the Mercedes Sprinter sized utility segment, and this time right for that Ford F-150 segment in the truck world which Ford has had locked up for four decades. Keep in mind VW has one they’re itching to make based on their Atlas SUV, and Mercedes has one wonderfully executed that they won’t bring here. I bet you unless Tesla does!

Yes America, an electric pickup sounds crazy, but this is the 21st century and these are EVs. And why not?

It amazes me as far as I know, how the only legacy car maker that makes even a hybrid pickup, let alone an all EV that none of them do, was Chevrolet. Ford says its F-150 hybrid won’t be here until 2020. So Ełon has a competitive, but still an open field to introduce something new, and be brave and bold. In replying to a request to his followers to give feedback about “nuances” they’d like to see, according to the Street, here was his comments about the proposed pickup:

"The Tesla Truck will have dual motor all-wheel drive [with] crazy torque [and] a suspension that dynamically adjusts for load. Those will be standard... Pickup truck will have power outlets allowing use of heavy-duty 240V, high-power tools in field all day. No generator needed," tweeted Elon Musk two days ago.

The Tesla Truck will have dual motor all-wheel drive w crazy torque & a suspension that dynamically adjusts for load. Those will be standard.

As TheStreet reported, one of the suggestions tweeted to him is to have an option for a second battery, in or below the bed, that can aid in boosting the vehicle's range when towing.

Now don’t forget, there’s that company in Indiana called the Workhorse Group that are making that $55,000 W-15 Electric Pickup Truck that has similar features and is supposedly is being offered for fleet sales sometime this year. This is the pickup that as a series hybrid Iike a Chevy Volt, has at last check, 80 miles of range with a 3 cylinder BMW engine that exclusively charges up the 60 kilowatt battery. And it has all kinds of handyman ports for power tools.

Is Timing Right For Tesla To Think of EV Trucks?

With a backlog of some, 400,000 Model 3s that were supposed to be made and delivered by now that they aren’t, some are asking if this is the right time to be thinking about new products when Tesla can’t even get its act together to make a preset one?

The answer is yes, as his addressing the pickup might be giving clues to the state of Tesla’s financial day to day health at the moment.

To do something like this suggests Tesla’s “production hell” might be coming to an end, or is already over that it’s situation is improving. Otherwise this would be a foolish thing to do that only Musk could get away with this. Except to cancel models or retool factories, the car business doesn’t take breaks. And Tesla needs to start looking forward once their Model 3 fiasco is behind them. That means figuring how to produce these two trucks it’d like to build.

Are you excited about the possibility of having an electric pickup truck? What range would interest you in an EV pickup truck? Please, share your thoughts in the comments section below for discussion.

RMay wrote on June 28, 2018 - 10:54pm Permalink
EV Pickup trucks are likely to remain expensive and not affordable for most truck buyers for a considerable amount of time. However, I think as the EV battery prices decrease and the EV ranges improve this will change and make EV pickup trucks more accessible and affordable for many people. I don't know how long it will take for this to change though.
Stig wrote on June 28, 2018 - 11:03pm Permalink
For example, Toyota has never been able to brag about being pioneers in anything, really. They just make strong, sturdy and powerful trucks that are reliable as a child. So I very much doubt that Toyota will soon make an electric pickup truck.
Eric wrote on June 28, 2018 - 11:04pm Permalink
Toyota hasn't been committed to EVs, but it would be nice if they surprised everyone. Electric motors make instant torque, perfect for a truck. But Hybrids are different. I’m not saying I would want a hybrid tundra but Toyota has had the ability to make it happen so they should try it.
Al Castro wrote on July 5, 2018 - 7:26pm Permalink
Eric if nobody wanted a hybrid Chevy pickup, I don’t think they’d want a Ford or Toyota one either. And if no one wants a PHEV pickup I say give them a BEV pickup with an insane amount of horsepower and torque.You see, before Elon invented Ridiculous Mode, nobody wanted an electric car. To solve that problem you make the fastest most powerful most sexiest of whatever, the electric version, and they’ll buy. They’ll buy.
Paul Eckerson wrote on August 13, 2019 - 6:15pm Permalink
The public is dieing for a.series hybrid. Being limited by a battery that takes precious time when making a cross country trip isn't acceptable.I. In time the interestate highway will be electricfied and fuel driven cars will be taxed out of existence because of global warming. Laugh if you want but you'll find it hard to do with your head in the sand!