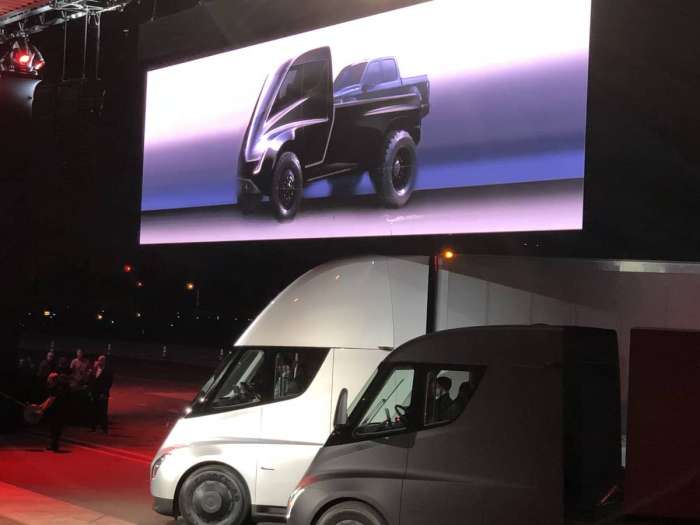 Today Elon Musk tweeted: "What would you love to see in a Tesla pickup truck? I have a few things in mind, but what do you think are small, but important nuances and what would be seriously next level?" Personally, I think that Tesla should build two truck models.
Advertisement

One Tesla truck would be a bare bones, affordable model that would essentially be a base Model 3 with a pickup bed. In Australia they have a whole lineup of “Utes” which are cars up front and pickups outback (pun intended). Which would be and easy adaptation of the smaller car.

The second Tesla truck would be a mini Tesla Semi

From the sound of the rumors, the Tesla truck that is being built is a scaled down version of the Tesla Semi big rig. Perhaps being big enough to park a regular pickup in it’s bed!

I am hoping that the final Tesla truck is smaller than a F150 class truck so that it’s not a nightmare to drive and park.

From the comments that I read online, the best Tesla truck ideas that I liked most were:

Swapable truck bed - I think that Tesla would expand their truck market if they offered options of specialized truck beds like a flatbed with hydraulic tilt, camper, food truck, box truck, tow receiver bed, and offer a bed module that doubles the size of the battery for longer range.

Back windows roll down, and back of the cab and seats fold down to extend the usable bed length.

Automatic trailer engagement - where the truck will track and automatically connect to a trailer hitch.

Built-in trays for tool chests in the front trunk. Maybe a small refrigerator too.

High power inverters for running power tools and even welders.

Inner edging around the pickup bed so that you can lock in strap grab points anywhere for tie downs.

But the idea that I thought was “seriously next level” was having a matching tow trailer that has it’s own battery.

It could extend the driving range of the truck when connected, and have the power inverters for onsite work or super-tailgating. Potentially, you could have the battery/tow trailer be a Powerwall battery backup for your home and charge it up with solar power during the day. Then hook it up to the Tesla truck have your solar electricity available wherever you need it.

What do you think would make the upcoming Tesla truck better than the competition?

Political wrote on June 27, 2018 - 8:00am Permalink
You can always tell when Tesla is out of money and about to raise capital, because CEO PT Barnum announces impossible pie-in-the-sky ideas that they can't afford... Elon Musk claimed that Tesla was financially stable and would never need to raise money again... then they raised capital 13 times. This will make the 14th.
Dean McManis wrote on June 27, 2018 - 11:31am Permalink
But the bigger picture is that Elon Musk has helped create a real EV industry. If he has good, workable ideas then more power to him. I think that with the largest selling vehicles in the U.S. currently being pickup trucks it's an obvious and strong market for Tesla to enter.