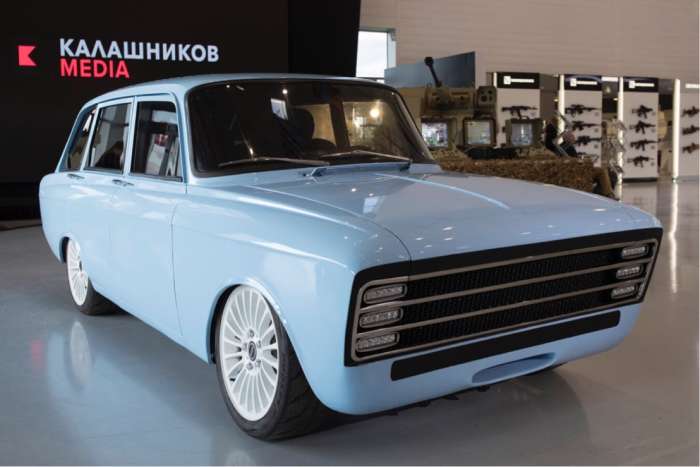 Poor Tesla: First it was the Shorts, now even the Russians are coming after them with a new Kalashnikov CV-1 electric car. Kalashnikov wants to build an electric car. But this Russian response from the inventors of the AK-47, to Tesla’s earth soothing, humanity healing, eco-conscious electric car lineup, is a retreaded 1970’s Soviet Era hatchback retro-electrified. Classic car conversion: maybe. State of the art design prototype: no. Roadware! Very nice!
Advertisement

It appears that other outside entities not related to the auto or energy industries, are showing interest in jumping on the EV gravy train by manufacturing their own battery electric vehicle for mass production and global market. At a recent professional exhibition of military and civilian arms, munitions, firearms, and weapons just outside Moscow recently, the storied and notorious Kalashnikov Group, manufacturers of the infamous AK-47, whose maker’s namesake was a shrewd Stalin Era inventor and Soviet tank commander in WW II, seized the opportunity of the expo to display what appears to be a prototype battery electric car. Social media hasn’t been the same since:

At a recent arms expo for military and civilians located just outside Moscow, the historic Russians arms manufacturer the Kalashnikov Group announced and displayed a powder blue 5 door hatchback as a prototype of what they say is a civilian battery electric vehicle. In displaying the car and promoting it on their website, the storied and historic arms consortium made its intentions clear that not only does it wish to mass manufacture the car, but that it believes it is also capable of incorporating into it those features of the car the technologies that are either compatible or capable of rivaling the technologies of apparent electric car industry leader, Tesla Corporation, the controversial American electric car and renewable energy resources company based in Palo Alto, CA.

Although Russian build quality of their automobiles has historically fallen wayside with the reputation of the Russian car industry that usually builds them, what is unique in this case is that a historic company who has set its reputation against the small arms and artillery weapons it builds and supplies to the various Russian armies over the last 200 years, is something to take note of, if not seriously. From the muskets they made for the Russian Imperial Army of the 19th century to fight Napoleon, to the anti-tank weapons they supplied Stalin’s Red Army during World War II to fight Hitler, Kalashnikov makes weapons like handguns, sub machine guns, artillery, bombs, anti-tank and aircraft and anti-aircraft guns. They are famously known for their founder namesake inventing, and they manufacturing, the terrorist preferred assault rifle, the AK-47. They also make military robots and unmanned vehicles, so there’s no doubt that they have the capability of producing a vehicle of some kind.

Under its present structure, the Kalashnikov Group, a merging of several arms companies over the years in various states of financial health, with its ancestral company founded in 1807 by Royal Warrant of His Imperial Majesty, Tsar Alexander I, is currently owned under shareholder stock by a handful of Russian oligarchs. But its namesake under its present form is a hero in recent Soviet-Russian history. Lieutenant-General Mikhail Timofeyevich Kalashnikov, who passed away fairly recently at 94, was a highly decorated Russian military officer who was a clever and shrewd inventor who quickly rose up the Stalin Army ranks of tank mechanic to tank commander, as he had a knack for being a self-taught gunsmith. Eventually becoming a post war academian and book author, his contributions to warfare science and to his country are above reproach. Bestowed with the medal of Hero of the Russian Federation, the highest and most prestigious honor any Russian citizen can receive from their country, he was afforded a state funeral at his death in 2013.

Should We Take Them Seriously?

This is legacy of another kind, for a car industry that likes to boast its historic credentials. If this company were about making farm tractors, lawn mowers, or microwaves, nobody would take them even further seriously about making a BEV. We’re even holding back laughter at vacuum man Sir James Dyson out of respect to see what his prototype EV will look like. We laugh that a vacuum company is making an EV but they have the key patents in battery tech. So who knows?

With the history they already have with the royal pedigree, just serious is enough to give pause and notice. Even if this car were to make it to a western market, which it won’t and I explain why below, it of course could never stand toe to toe with a Tesla (even on their worse quality control day), a Porsche electric (if they ever knew what a bad quality control day ever was), even a Nissan, Kia, or Hyundai one as well, in category, design, function, and to the contrary technology. The sedan might be endangered here, but the straight out 5 door hatch is also played. But as a classic car conversion, they might be onto something. But that’s it. Hopefully the electric version will be more reliable than the gasoline version probably ever was.

Missing traditional headlights, for example, the marque updates to LED’s in front. Grille design makes it difficult to see if it’s still functional. Folks for some reason I’m feeling Ford Cortina here. Maybe late 60s early 70s Ford Falcon? Somebody out there would like to chime in?

What About the Original Car?

The Soviet style hatchback once called “Izh,” is the design and styling basis for Kalashnikov’s electric vehicle called CV-1. This EV prototype build is based upon a pretty popular car known for its ruggedness and off-road prowess, especially by Russo-Soviet-Eastern Bloc standards of its day back in 1973. It was known as the "Kombi" (Russian: ИЖ-2125 Комби, short for "combination"). Being a hybrid station wagon/liftback of its time, perhaps what a CUV is today. Ironic this is the same set up Mercedes Benz is using for their prototype for the Maybach Ultra Luxury Saloon Utility I call it, the SUV that looks like a Saloon. What comes around goes around.

When we westerners, particularly Latin Americans, think of “Kombi,” we think of the Kombi VW Type 1 and 2 Bus. Russo-Eastern Bloc has a different take for the same reason, the car was given the "Kombi" nickname, which in a way alludes to the Combi coupé (the word kombi itself meaning "station wagon" in German and Polish, while in Russian a station wagon is called universal).

The original car, the IZh 2125 is a compact car produced by the Soviet car manufacturer IZh from 1973 to 1997. It was based on an Izhevsk-modified Moskvitch 412, with the first prototype released in 1972 as a small family car. It was considered to be the first Soviet hatchback (released about a decade before the well-known Lada Samara), though the car actually possesses a station wagon body wherein the "D" pillar has its own support and does not gain from weight reduction (which would position the model more in the liftback family). In Russian literature the car is referred to as a liftback.

The Kombi had a notable success in sales within the USSR between 1974 and 1980 due to its durability, off-road capability, increased lifting capacity and was the first Izh car sold for export. Its popularity was also helped by limited competition – station wagon variants of the Lada, Moscow-built Moskvitch and Volga were not as easy to buy as the Kombi. In 1982, the Kombi received a facelift, along with the IZh-produced Moskvitch-412 and IZh-2715 panel van and was then rebranded as the 21251. Among notable features, the car borrowed the dashboard from the Moskvitch 2140 and featured improved seats and headrests.

The modernised IZh-2125 sold into the 1990s. As the Soviet Union collapsed, IZh was first privatized as the open joint stock company "Izhevsk" and slowly started converting their automotive production lines to other kinds of manufacture, such as firearms. In 1995-96, when AZLK's revenue decreased drastically, the company was partially reacquired by AutoVAZ and renamed "IZhAuto". AvtoVAZ managers then discontinued all of IZh's previous models and ran their own ones into production. A new hatchback version was branded IZh 2126 "Oda" and ultimately replaced the Kombi.

And so here it is again. Westerners might not be impressed, but anyone with understanding of Russo-Soviet auto history can understand why Kalashnikov Group picked this car build, other than the fact it won’t interfere with licensing as the company that made it doesn’t exist anymore. Its a platform already popular where it was made, it’s tested time and again, and it’s a design that’s still versatile to make a full-out wagon, sedan, even a coupe, just as popular in the east, and should it face a long production run because it does cost about $2 billion USD to develop a car from the ground up plus the electric tech, ask Tesla, it could become even more popular in the west, should it ever get here, as particularly Americans are more turned on to liftbacks nowadays, as opposed to trunks. My opinion: they just need to clean it up and modernize it a bit more to get Hollywood Madison Avenue appeal. And the low rider thing: it looks like amateur tuning with tires that scrape the fenders. They should make it “tall riding” like a Cullinan SUV/CUV that it probably should be, at least the Soviet version.

According to several media reports, the company told reporters attending the expo that the car featured technology that would "let us stand in the ranks of global electric car producers such as Tesla." What that technology is, how it compares with Tesla, and how its technology even helps its EV range, which is less than even a Chevy Bolt, were not addressed.

Since the vehicle is in the prototype phase, vehicle pricing was either not addressed, discussed, or estimated.

Even if the CV-1 were to make it past prototype to pre-production and eventual production phases, the Kalashnikov Group would under present international diplomatic politics, not be able to sell this car to the West, at least legally, as in accordance to any country who is under joint UN resolution that sanctions Russia for the annexation of Crimea and Russia’s invasion of Ukraine. The United States and the European Union have both specifically sanctioned the consortium for supplying arms for invasion of both those parts of the world. So once again, this is just another product that unless Russian circumstances changes, it’ll only be sold mostly in the home market, perhaps a few units to Africa, Asia, and South America to places not obliged to the sanctions or willing to look the other way.

No comment from Tesla. Mr. Musk was asked on social media for a comment but he hasn’t replied.

Roadware. Very nice. What do you think?