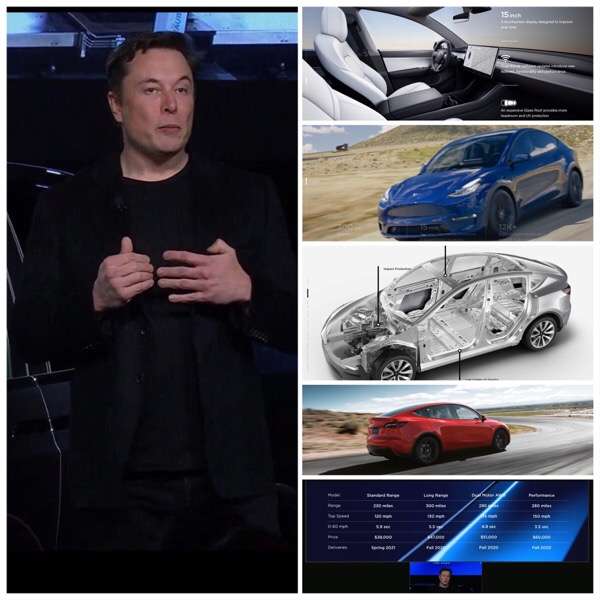 The Model Y Unveil at the Tesla Design Studio: Another Historic Cash Machine Model for a Once Again Cash Strapped Tesla

ANALYSIS AND OPINION: The Eve of the Ides of March like the Model Y unveil at the Tesla Design Studio came like the new car itself and went like any other event without much fanfare. Both are no frills or gimmicks, the most practical you can get in a car and an event, neither didn’t take much money to make, and in the car’s case it has the potential to outsell it’s siblings combined.
Advertisement

EDIT NOTE: 0040 Hours PDT 3/17/2019 Beverly Hills CA: Happy St. Patrick’s Day. Apparently there was a surprise at this Tesla Model Y unveil that everybody missed at the beginning of the show. Chaulk it up to Elon and his famous “Easter Eggs.” Please take note of the image right above this note of the Tesla Model U teaser image, and please see my footnote at the end of this report. AC

Filed 23:59 Hours PDT 3/15/2019 from Culver City CA: Tesla last night formally introduced its fifth product for immediate sale since the beginning of car production in 2007, the Tesla Model Y. Other than the surprise we immediately missed on the screen about the next coming vehicle, and that’s Model U, CEO Elon Musk gave Tesla gave fans last night the only obvious surprise that the car has the option to hold seven passengers, albeit it a tight proposition. This is a unique feature for a compact CUV in segments where to be a three rower you usually have to be at least spaciously mid-sized. Other than having a performance model available when it gets delivered hopefully late next year, there will be no falcon wings, ludicrous mode, fancy leather, or sophisticated James Bond features usually reserved for more expensive Tesla models like S and X, or the President’s State Car in Cadillac One, for that matter. Like the song, “What You See is What You Get,” is really what you get. And that just might be all that it takes for Tesla to find that winning formula like it did with Model 3, for it to get out of its debt draining cash funk:

Although there was no live performance, fanfare, or frills Iike there usually are at product unveils like the ones at the Steve Jobs Theater with Tim Apple, Tesla CEO Elon Musk provided free rides and closer looks at present and upcoming vehicles at his. What was the most unique thing about last night’s Tesla Y unveil was that there wasn’t anything fancy that was either a car feature, or came out of nowhere from the dark, other than Elon himself. Ironically other than the car obviously, it was none other than Elon, who was last night’s “the next big thing.”

The fact that he was standing there, with a somewhat tepid audience who themselves as well I don’t think realized, was itself an accomplishment after all he has been through this past year, albeit some of it self inflicted. Tesla and Elon are still standing. I thought that deserved an ovation that he didn’t get.

Elon took us down memory lane to the beginning of Tesla Car One, VIN #1, Black Beauty, a Lotus glider that magically transformed, although roughly at the beginning with new Tesla technology freshly developed, into their first production car rolled off a Tesla assembly line that became the Tesla Roadster, the car range now known as Tesla Roadster 1. My, have times changed.

The first thing you realized that the audience did, is how the two seater is so small compared to the entire model range, and compared to her next generation younger sister, Roadster 2. But Elon and company had to think big but start small.

He then guided us through the whole historic lineup S through Semi and Roadster 2 to show how far we’ve come and to go by ending the unveiling with the most boring vehicle compared to the rest of the range, that ironically has the formula to become the hottest selling vehicle Tesla ever made. That’s this new Model Y. And they’re counting on this.

Severely cash strapped again, this time not from making mistakes but from paying off the bills of making previous mistakes, Tesla now needs an additional money-making-machine car to pay off all the bills of bills. I hate to put it this way but Tesla really deserves this more than GM ever does: I hope to see the day when Tesla has more money than God can count than GM or VW Group could ever have. Tesla may have found the recipe to even outdo Model 3 to begin their journey to make this happen.

By using 75 percent of Model 3, this is probably the most inexpensive vehicle Tesla has ever made for production thus far. By doing this Tesla might be able to get ahead of its massive $10 billion USD debt curve by introducing a new vehicle for production while keeping costs low. Bringing a new vehicle to market for a manufacturer usually is a $1 billion dollar proposition.

Tesla is severely hoping that a Model 3 CUV that won’t be their fastest most sexiest most luxurious most economical nor largest nor smallest nor most expensive nor cheapest vehicle, will be their hottest seller to outsell all its other vehicles combined. Like this previous sentence I wrote, that’s a tall proposition for any car maker to invest in just one car like that.

And you know, given what Tesla has already given us, from the junk bonds to the overly high now volatile stock price to waitlist mania to the uneven body panels to the labor OSHA issues to Tweetgate to the podcasted toke to the tent right up to finally delivering us the Base Model 3 a lot of us really want, and to remember how much its fan base is so loyal to their brand, they just might be able to pull this off as well. I can get pissed off at Tesla at times, but man I hope they still succeed.

The Difference Between Passion and Duty

I just hope other “all electric” car makers like VW Group, most especially disappointing GM are watching. If they had the same passion like Tesla does, that they really don't, this could have been their unveil to a vehicle they should have by now, as well. Note the three more years GM says it’ll take for the first electric Cadillac, and the 12 years since Elon rolled that first Lotus glider off a Tesla assembly line, that the rest had that’s been squandered. The glaciers are almost gone . . .

Samuel Johnson once said, “the wretched have no compassion. They do things only out of duty.” Substitute passion. There’s a difference between having a passion and doing something out of obligation. What GM is doing is not anything about passion to build an electric car like Tesla. It took them one year to make an autonomous car proposal ready for production in one year´s timeframe, awfully fast for a level 5 driverless car. Cruise Automation was their incentive. Where’s their electric other than Bolt? What GM is doing is about no choice because your competitor is doing it and so is China.

Think about that when you click below the next line to order your Model Y while still waiting for an electric Cadillac.

The 2021 Tesla Model Y is now available for order at tesla.com.

EDIT NOTE 3/17/2019: Elon did give us a surprise we all missed. It’s a teaser shot of Model U the next coming pickup. It was in the first few minutes or two of the show. So Elon had to tweet it for us yesterday for us to finally get it. An Easter Egg of another kind. I show it above. I’ll leave it to your devices and imagination to figure out what the hell part of the truck this image represents.

—+—+—+—+—
Photos are from Tesla Media and the Tesla unveil broadcast. Images are published here and all under Section 107 of the Copyright Act 1976, allowance is made for "fair use" for purposes such as criticism, comment, and news reporting.

UPDATED NOTICE: I am so grateful that my publisher allows me the generous privilege within reason to either report the news or express my opinions about matters related to the auto industry. I try to be judicious and respectful about the content. I ask you do the same in the comments section by refraining from inappropriate language and content. Please be nice, there’s no reason to get nasty, this is only about cars. The irony is if you came up on me on the street to recognize me I’d grab a beer or coffee with you and we’d talk about cars for me to thank you for being a reader! I may disagree but I truly do love you all, I’d take a bullet for many of you. And please keep in mind that the opinions expressed here are solely mine, and not those of Hareyan Publishing or its employees, including my staff colleagues.

What do you think of Tesla Model Y? Please let us know below!

kent beuchert wrote on March 16, 2019 - 7:11pm Permalink
The Model Y is without doubt the ugliest Tesla and is an ugly clone of the Model 3 - it is hardly an SUV and teh thirsd seat is a joke. As is the silly notion that lathough the Model 3 is having problems finding buyers, its Model Y clone will not. Why? Well. because Elon Musk calls it an SUV and claims the world is thristing after SUVs. The Model Y won't be avaialble for a long time and the low priced one even longer. By then a dozen or more competitors will be waiting, all able to recharge ther batteries twice as fast as the Model Y and with much greater driving ranges than trhe Model Y's paltry 210 miles. This car will also have a $7500 price disadvanatge in the U.S. because of the tax credits. Tesla will not be ble to sell very many Model Y vehicles in the U.S.
Al Castro wrote on March 17, 2019 - 4:22am Permalink
Kent thanks for your comment. Point taken. Keep in mind that Model 3 regardless of looks is a hot seller and her CUV sister is also a Tesla, and that’s now pedigree to be a hot seller as well. It is a boring vehicle ironically but you can’t dispute that if Americans lined up for the sedan version they’ll drool over this CUV variant. People want what they want. As far as prices, Tesla announced price increases today but aggregately BEV prices continue to drop as makers switch supply chains and ionization becomes even more cheaper.