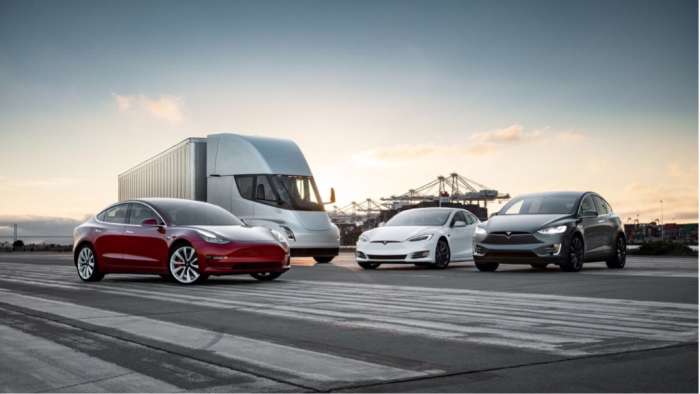 With Lower Priced and Less S and X, Tesla Revamps Model Range Structure and Readies for Base Model 3 Production

By selling the entire model range in three categories, Tesla Corporation makes each car more cheaply, and simplifies discerning which car is which. If you want “Ludicrous,” which now comes in a separate upgrade package at a $20,000 premium, no more looking at old school Bentley-like badges to see battery energy capacity, you just look for “Performance.” This also helps with pricing and sales: by having cheaper Base Models S and X, Tesla is getting ready to sell Base Model 3.
Advertisement

It will now cost nearly $140,000 to buy the highest performance Tesla as the young but storied electric car company lowered prices and cut production on its cheaper version legacy models S and X, but made it even more expensive at the high end with a $20,000 premium to buy a performance model with a separately sold “Ludicrous” upgrade performance package. As Tesla Corporation ramps up to sell its cheapest version mass market model, it revamped its entire model range by eliminating energy capacity number nomenclature for battery pack size. No more “75D” or “100D,” etc. to denote power or battery size. Instead it will follow the Model 3 example to offer all cars in three flavors: “Base,” “Extended Range,” and “Performance.” In trying to save money to ramp up production of Base Model 3, it will now offer one size 100 kW battery pack for all cars. Since it’s now cheaper to make these batteries, what the car maker will now do is software-limit the performance of the batteries relative to the version the customer paid for. Tesla also taken other steps to get ready to sell the Base Model 3 it had been hoping to mass market at a price point of $35,000 USD:

All of this sounds confusing until you sit and read it over slowly to get the grasp. Let’s use the new Model S pricing structure as an example to see how easy but more expensive getting a top of the line model becomes. Entry level model is now $85,000. Since the packs are much cheaper to make now, all the cars will come with 100kW batteries. Anytime down the road you want to extend the range especially as the car gets older, you can get an over the air (OTA) upgrade of about $8,000 for now, and get about 25 miles or so of extra range. This is how Tesla used to do this before and is going back to doing it this way again by unlocking battery performance. This comes with RWD or AWD options. When unlocked, the car becomes “Extended Range,” no longer “Base.”

Add a motor, unlock the pack, pay another $19,000 and you now have the Model S “Performance” model, with the extended range capacity, the extra motor, and the extra horsepower and torque. For an additional 20 grand you get supercar performance with “Ludicrous Mode.” This all comes in at about $132,000 for S and about $137,000 for X. This should exclude extra charges like shipping, fees, taxes, etc.

What this All Means:

Model Y is coming very soon, and with Tesla wanting to sell a base version of its smallest vehicles at a price point of $35,000, simplifying assembly and pricing of its legacy 12 year old models will enable all this to happen. Cutting back production to make way for other models probably wouldn’t hurt either, as Model U follows quite shortly after Y, Semi scheduled for production this year, and we all wait for the next Tesla Super car the super halo, Roadster II.
Production at Fremont is at capacity as CEO Elon Musk last year said according to the Drive, the plant is “jammed to the gills,” with an added tent mind you, so it looks like Model Y for now will be made in China, and unless Tesla can find capacity domestically, Model U might be assembled in China as well.

Photos originally all come from Tesla’s website are all published here and all under Section 107 of the Copyright Act 1976, allowance is made for "fair use" for purposes such as criticism, comment, and news reporting.

What do you think of Tesla’s new pricing structure and changes? Please let us know below!

kent beuchert wrote on February 1, 2019 - 9:36am Permalink
At these prices, obviously the buyer is paying for a large part or perhaps all of the 100kWhr battery . The Model X 75D lowest priced version is getting killed in Europe by the superior Jaguar I Pace . , base priced at $69K Creating a base Model X at $88K is not the ticket to stem the bloodletting (I Pace outselling base Model X 4 to 1 in Holland and killing it in Norway, etc). Tesla cannot possibly save anything on production costs by completely filling their battery case. I consider this basically fraudulent merchandising. Tesla is hopelessly overpriced in theU.S. with their diasapearing $7500 tax credit. The base Jaguar can have a net cost of $62K while the Model X base starts at $88K. And the Jaguar is consistently rated superior to the Model X. So how many braindead carbuyers does Musk think we have in this country? The Porsche Taycan has already sold out its entire first year's production, which will be greater than that of the Model S next year. They might even raise the planned production again and steal even more Model S sales (many buyers of the Taycan were Tesla owners) . In the U.S. it's not a fair fight - the Model S has no ability to compete on an even basis with the Taycan. And if Jaguar follows thru and creates a performance model, it will be far faster than any Tesla ludicrous mode vehicle and even faster than Tesla's $250,000 sports car. Tesla is claiming that the Model Y will vastly outsell the Model 3. It needs to, as the Model 3 sales are fading fast - Tesla couldn't even induce the sale of 3300 unsold Model 3 cars at the end of the year by offering inducements, $2000 discounts, etc. The Model Y is arriving way too late - not until mid 2020, by which time there will be a plethora of SUVs in its lower and upper price ranges, and in the U.S., all with a $7500 price advantage. Selling in the U.S., Tesla's largest market, will be impossible under those conditions, if they exist at that time. It will be difficult even if there are no govt tax credits. The Model Y competitors are getting very good reviews and have healthy sales and will be joined by 6 times their number by the time the Model Y finally arrives. And they already are priced lower than the lowest possible (but unlikely) Model Y prices. We can expect equal or, more likely, superior EV technology with respect to range and batttery recharge speed.
Bill wrote on February 2, 2019 - 11:50am Permalink
Good article Al - excellent data - thanks! Can't really see how this will enable them to make a cheaper Model 3 and it seems recent financial reports are equally confusing according to analysts especially regarding low capex levels vs expansion plans. Time will tell...maybe more tax payers money is coming? That aside, 25 extra miles of range for $8 grand smacks of incredible greed, as they will have spent the money regardless (given battery production is outsourced) yet be unwilling to pass any realized savings onto consumers. Or maybe THIS is a strategy to fund cheaper Model 3??? I can't help but wonder what consumers would think of GM if they put a more expensive v8 in every Camaro but disabled 4 or 2 cylinders unless folks paid more money to them. I think a backlash would be of revolutionary proportions! Possible impacts of "Made in China" syndrome is another story, given seemingly continued US tax payers subsidies for the company et al?
DeanMcManis wrote on February 3, 2019 - 3:30am Permalink
Wow, that is a LOT of speculation Kent. But with every bit of it being only speculation that Tesla will fail, you sound like a Tesla stock short-seller. The Jaguar iPace looks like a nice BEV crossover, but in many ways it is not a true competitor to the larger Tesla Model X. It is the new kid in town, and it may be a better fit for European roads and buyers than the Model X. The Taycan looks like an exciting BEV, and along with the Taycan's brother the Audi E-Tron GT, they will take back some of the customers lost to Tesla over the past few years. But building a BEV is a new prospect for Porsche/Audi, and hopefully they will not have bugs that plague first-year new cars. We can both guess at a lot of successes and failures with many new BEV models being announced now and for the near future, but it makes far more sense to wait and see until the new models are sold, and we are comparing actual street-driven, production cars against each other in real life. As for Tesla's new model configurations/line up it makes sense to simplify their offerings, while giving more bang for the buck.

Elon Makes a Cybertruck Statement With an Action, But Quiet in Words
Tesla's Record Month in China: Doubled Registrations in March 2021
END_OF_DOCUMENT_TOKEN_TO_BE_REPLACED