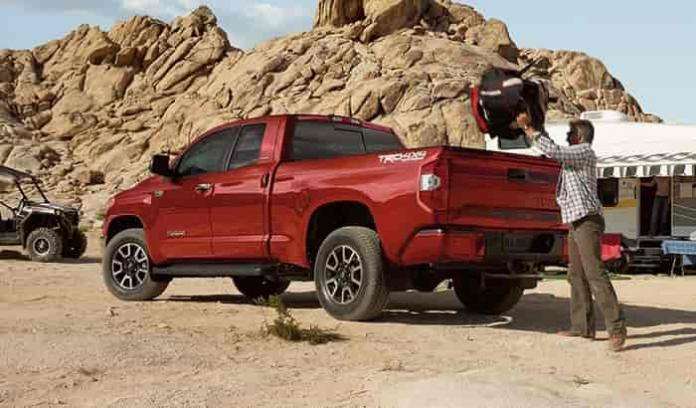 Looking for a good truck? Well, look no further than the Toyota Tundra. The Tundra checks all the right boxes for all your truck needs. Whether you have a double cab or extended crew max, Tundras are roomy and comfortable, all while delivering a wicked off-road performance in style.
Advertisement

Still not sure? Here are top 5 reasons a Tundra could be right for you. In fact, here is a working review of the 2016 Toyota Tundra Limited: luxury on a budget.

1. Toyota Tundras Have The Best Reputation

A Tundra is always considered an award-winning choice, it was voted the “Most Dependable Large Pickup” for seven years in a row since 2007 by J.D. Power and Associates. Don’t believe me? To prove this argument, “the 2013 Toyota Tundra received the lowest number of problems per 100 vehicles among large pickups” according to the J.D. Power and Associates 2006-2012 Vehicle Dependability Studies.

Now, let me ask you a serious question. When have you ever seen a Tundra, or Toyota in general, broken down on the side of the road? Last time I checked, never! (Unless you ran out of gas, your battery died, or you’re just one of those people who treat your car like garbage). Toyotas have always been one of the top most dependable vehicles on the road, so what would make owning a Tundra any different? Tundras are also very low maintenance which may average you between $427 and $522 a year- that's only $10 a week (which is still less than what you spend on your 18-pack of Bud Diesel each week). If you buy quality the first time, you’ll never have problems later.

The Tundra is indeed one of the most sought-after trucks on the market. Toyota was ranked number one in ‘Customer Satisfaction’ in the American Customer Satisfaction Index, and has the greatest durability of any full-line automotive manufacturer! When you purchase a Toyota Tundra, you’ll always have reassurance wherever you chose to travel. Toyota throws in a complimentary maintenance plan and roadside assistance for two years or up to 25,000 miles (not like you’ll need it anyway), and that alone saves a bundle. Who needs AAA?

3. They Are The Most American-made Truck

You hear the name Toyota and automatically think Japan, but on the contrary, the Tundra is indeed the most American-made truck. All Tundras are made in the USA, San Antonio, Texas to be exact. Every. Single. One. The Tundra has had 75% or more domestically made parts (80% in 2010) since 2007. Every Tundra has either been built in Texas or Princeton, Indiana since 2000. If you consider yourself a true patriot, buy a Tundra. Nothing screams “America” more than a sexy, ‘souped up’ Tundra.

4. These Trucks are Powerful

The most common reason people want to buy a truck is because they are looking for something with power that can tow and haul around everything. Second and third generation Tundras contain one of two engines: a 4.6-liter V8, or a 5.7-liter V8. All SR5 and SR extended-cab models come with the 4.6-liter V8 engine which produces 310 horsepower, 327 pound-feet of torque, and has the ability to tow up to 6,800 pounds. Platinum,Limited, 1794 and TRD Pro models (optional on the SR5) come with the 5.7-liter V8 engine- it produces 381 horsepower, and 401 pound-feet of torque. Additionally, all 5.7-liter Tundras come equipped with a tow package which includes engine oil and transmission coolers, 4.30:1 axle ratio, integrated trailer hitch, and large braking hardware for increased fade resistance. Depending on the body configuration, these beasts have a maximum tow capacity of 10,500 pounds.

You have to look at buying a vehicle as an investment. When you buy poor quality cars, it becomes apparent that you did not make a good investment. Toyotas however, are the most popular vehicles that retain residual value. Most cars depreciate by two thirds of their original value, which makes it extremely difficult for car owners to get much of their original investment back. According to Kelly Blue Book statistics, the 2016 Tundra is the first full-size truck to make the grade retaining 64.1 percent of its value at 36 months and 53.8 percent of its value at 60 months.Therefore, truck buyers looking for a true investment need look no further than Toyota Tundra.

Do you agree? What other reasons compel you to drive a Tundra? Comment below!