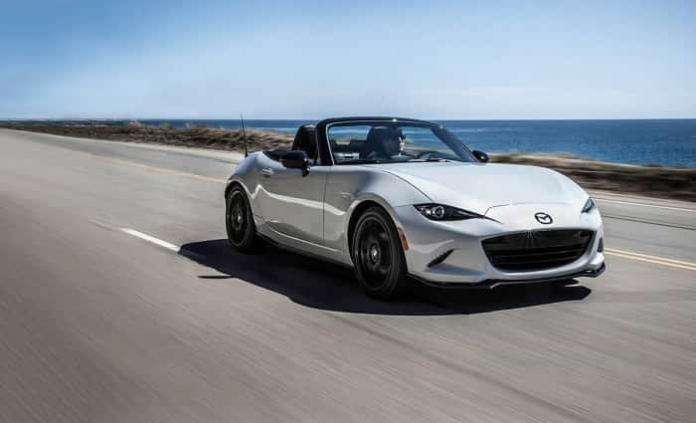 Two types of Miata owners, maybe three: Which are you?

Mazda just unveiled its so-called Skyactiv-X homogenous charge compression ignition engine prototype, which promises to burn gasoline with diesel-like efficiency. But it’s clear that, even as Mazda is trying to squeeze as much energy as possible out of every last hydrocarbon drop, it’s looking ahead to a world where electricity is an increasingly important source of automotive propulsion. Does this mean an electric Mazda Miata?
Advertisement

A report states that the Japanese automaker will electrify its entire lineup by the early 2030s including Mazda Miata.

In doing so, Mazda would join automakers like Jaguar and Volvo, whose plans to electrify their offerings made headlines this year -- though those two plan to do so about a decade earlier than Mazda. Add in the slew of EV concepts shown off at the Frankfurt motor show, and it seems like the tide is turning against gasoline and diesel-powered vehicles.

So should we brace ourselves for a world of electric Mazda MIata cars? That actually sounds fun, come to think of it, but not necessarily.

As industry observers have noted, “complete electrification” of an automaker’s lineup doesn’t necessarily mean “all-electric vehicles.” The latter term is what you’d think of as your typical EV -- batteries powering motors, and that’s it. The former could mean anything from mild hybridization of cars still primarily driven by internal combustion engines to plug-in hybrids with ICE range extenders.

The question is: Which Miata owner would you be?

Personally, I think that the Mazda Miata MX-5 is small enough and the quickly changing battery technology will allow an all electric Miata with at least a 300 mile range is completely possible. Not to mention very desirable. However, I can see why Mazda may want to keep it’s options open in terms of powerplants. A range extended Miata would be attractive too, but I would wonder where they would put it in the small space that is the current form of the MX-5 anyway. Maybe even a mild hybrid version who just can’t quite part with the sound of the revving engine coming out of a turn.

I currently own a Mazda 5 and think they should bring back that idea of a vehicle and make that their testbed for electrifying their vehicles. Time will tell whether 2030 is too late in the game to start electrifying, I hope for all of us that enjoy Mazda’s attitude toward driving that it isn’t.