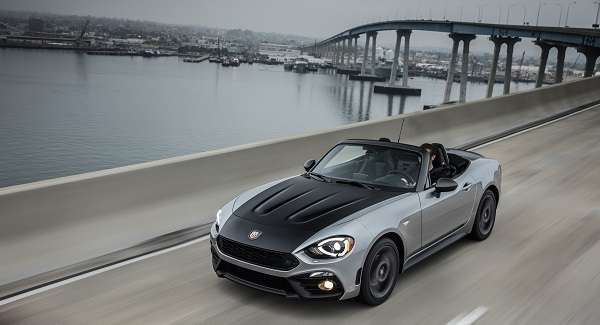 The Fiat 124 bring more power and more torque, but is slower than the Mazda Miata. Here’s why.
Advertisement

Europeans love torquey engines. Having been brainwashed into believing that diesel engines are the cat's pajamas, they like engines that have loads of torque at revs just above idle. For those torque fans looking for a roadster, the 2017 Fiat 124 Abarth is just the ticket. However, for those that want to go fast, for less money, the Mazda Miata is the better choice.

In his recent review and instrument test, John Pearley Huffman at Car and Driver clearly explains the upsides to the new Fiat 124 Spider Abarth. It has more torque in low RPM ranges, and it has some optional seats that work great for people with narrow backsides. Both of the Americans with that shaped butt will be thrilled. What they might not like is that the 124 Spider Abarth, with its 1.4-liter turbocharged engine, takes 6.7 seconds to get to 60 MPH compared to the Miata’s 5.9 seconds. Both of those results were recorded by Car and Driver.

- Read More About Miata - New Mazda MX-5 Miata is faster than what car?

When we first saw the European acceleration test results, we reported that the Miata may be faster. Some of our readers responded that the difference could be from an extra shift being needed since the Europeans actually test to 62 MPH (because they use that newfangled metric system). Our readers are smart, and I filed that away as a possible reason. Nope. The Fiat engine is better on paper, but in real-life the Miata with the normally-aspirated 2.0-liter four cylinder engine is faster. (More on page 2)

If it were only the zero to sixty measurement in which the Miata was faster, we would again say it could just be shift points. However, the Miata was also faster in top-gear acceleration. Let's face facts, the Miata’s aluminum engine with no turbo and less power is still faster than the iron-block turbo from Fiat. But why?

Without having the power and torque curves to analyze we will speculate it is as simple as “Power under the curve.” An engine that has more power during more of its operation is always faster than one that has less, but has a peak at the top few hundred RPMs. That plus the gearing is our guess as to why the normally aspirated engine is faster in this comparison.

Mr. Huffman is one of the best writers in the biz, so please read his excellent argument for a normally aspirated engine in a roadster. I will just say it plainly: Small turbo engines are not as enjoyable as normally aspirated (non-turbo engines) in roadsters. Wringing them out at high RPMs and operating in the 3K to 6K RPM range is sort of the point. In the case of these two similar cars made on the same production line, the turbo is not just less fun than the Mazda engine; it is also slower.

- Read an opposing opinion here- Why the 124 Spider Abarth is the better car.

Tsingshan's Threat to Tesla: EV Maker Is In Battery Crosshairs
Tesla-Funded Research Reveals One of The Biggest Mysteries of EV Battery
END_OF_DOCUMENT_TOKEN_TO_BE_REPLACED