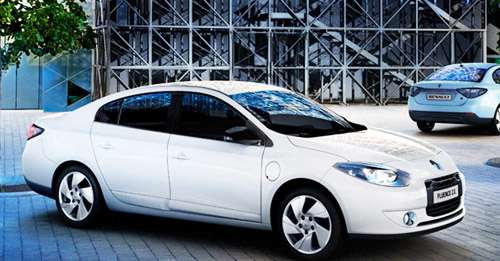 World Economic Forum to be electrified by Renault Fluence Z.E. and Nissan Leaf

The Renault-Nissan Alliance is targeting the World Economic Forum, to be held in Davos, Switzerland from Jan. 25 to 28, with both barrels by allowing delegates to examine close-up and drive the Fluence Z.E. and Leaf all-electric vehicles.
Advertisement

If you are trying to influence global policy with new technology, there are few better venues than this annual gathering of roughly 2,500 captains of industry, heads of state and national policy makers. The Renault-Nissan Alliance is taking this opportunity to show off their new technology to power cars and, so they say, household appliances.

The learned assembly is coming together to discuss the Earth's most pressing concerns especially in regard to the scarcity of certain resources and energy security – with all that entails. Carlos Ghosn, CEO over the Renault-Nissan Alliance, and executives from both Renault and Nissan will be in attendance.

As the highest city in Europe at 5,120 feet above sea level (making it 160 ft below the Capitol building in Denver CO), Davos is an appropriate place to address issues related to air quality. Notably, EVs do not require oxygen to function and thus are unaffected by altitude, however cold weather requires maintaining battery temperature. If you’ve ever been camping in the Rocky Mountains, you know what cold nights can do to flashlight batteries.

This is the second year the automakers have brought their zero-emission vehicles to the Forum. Obviously adoption of electric vehicles can have an immediate impact on the emissions produced by passenger cars. Notably, most electricity in the high mountain nation is produced relatively cleanly.

The Nissan Leaf was presented to delegates last year, but next week will be the first look the delegates get at the Renault Fluence Z.E., powered by a 93 hp electric motor. Slightly over 13 ft. long, the Renault has a base price equivalent to $33, 532 and range of just over 100 miles on a charge.

Notably, 22,000 LEAF owners across three continents have traveled a total of 35 million miles, according to the manufacturer, keeping 7,300 tons of C02 emissions out of the atmosphere.

The Renault-Nissan Alliance Pavilion will be set up in downtown Davos, where delegates and the public will be able to arrange test drives. General Electric is providing charging stations powered by local hydropower stations from Davos-based EWD.

While there, visitors can also check out how Nissan's unique LEAF-to-Home (L2H) technology reverses the EV’s energy flow, enabling the car's 24kW Lithium-ion battery to charge household appliances. At the pavilion, the system will charge mobile phones and laptops – even making hot chocolate for the crowd. For every attendee who uses a recyclable cup for the chocolate beverage, The Alliance will donate a dollar to the Brazil forestry program Mata no Peito. Visitors can get more information about the L2H system while enjoying a free hot drink.

So the Nissan Leaf 2 Home presents an interesting possibility. The reader who wrote about his experience with an orphan Leaf, revealed how there were several places in his area where he could charge his EV for free.

There is also a movement away from McMansions to minimalist housing currently occurring in a small way. So it could in theory be possible with a pair of Nissan Leafs to power a tiny house with Spartan energy usage. Go charge them at free stations and come home and plug in the house.

Certainly not a long-term solution, but while it lasts, free energy frees up funds for other uses. Imagine that?