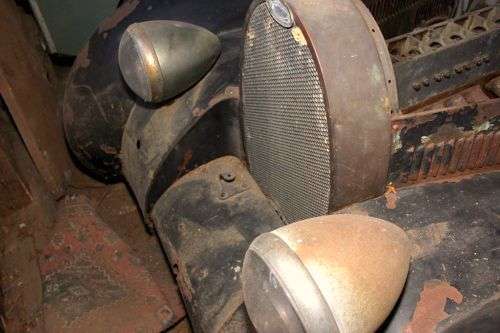 Vintage Bugatti, found in barn, to be auctioned next month

Lankes-Auktionen im Schloss, a German auction house in the Bavarian town of Doehlau, will offer a one-of-a-kind Bugatti, 8 cyl. series 57, found under a pile of lumber in a barn. This automotive jewel needs complete restoration, but the engine and many original parts are still there. The auction will be held just before the famous Mille Miglia race on May 11 in the Museum Mille Miglia at 5 p.m., one day prior to the race.
Advertisement

Bugatti’s were primarily built between 1909 and 1957, by the original firm found by Ettore Bugatti, a native of Italy and a naturalized citizen of France. With a 10-year hiatus in and around World War II, the company produced some of the fastest and most exclusive automobiles in the world. Of 7,900 built, only something like 2,000 are still in existence.

In January 2009, a rare 1937 Bugatti Type 57S Atalante was reportedly found in the garage of a late surgeon in England. Only 17 of these were made, all by hand.

That July, a 1925 Bugatti Brescia Type 22, soaking at the bottom of Lake Maggiore between Switzerland and Italy, was lifted out of the water. The Mullin Museum of Oxnard, CA bought it at for a reported $351,343 at Bonham's Retromobile sale in Paris last year.

The Type 57 was built circa 1934-35 and though needing a significant outlay for restoration, the investment will likely fare much better than an equivalent gamble on stocks or banknotes.

Lankes, namesake and president of the auction company, says such a discovery would be an absolute climax in the long history of his auction house. Details of the car are available in the auction catalogue, available now. Among the other rare and precious cars connected with the famous Mille Miglia race, the Bugatti will certainly be the Crown Jewel, he inferred.

“It is interesting to learn how many people are eager to buy classic cars due to a lack of confidence in banking investments,” Lankes said. “The discovery of the Bugatti will surely cause great excitement among lovers of old cars.”

We have placed a request for more information with the auction house and will provide updates when available.

ReggieR452 wrote on July 2, 2011 - 4:23pm Permalink
Man, I wish I could afford something like that. I would buy that Bugatti, load it onto a <a href="http://www.trailersplus.com">dump trailer</a> and get to my house as fast as I could. I love working on old cars and need a new project!
family lawyers wrote on July 12, 2011 - 10:46pm Permalink
Awesome, dude! Do you have the picture of the whole car? We want to see it in its entirety! A true gem with all those rust!

Toyota's First EV Will Have a Name of BZ: Toyota BZ
First Videos From Inside The Boring Company's Las Vegas Loop
END_OF_DOCUMENT_TOKEN_TO_BE_REPLACED