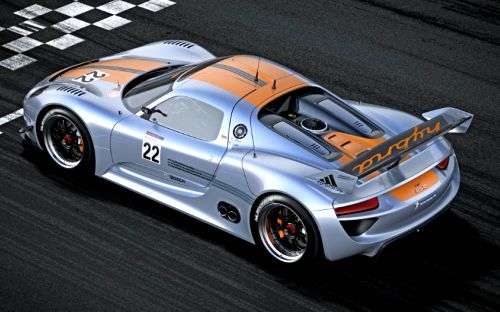 A Tribute to Porsche's racing heritage in Monterey

During the 2011 Monterey Classic Car event this week, Porsche celebrates the motorsports heritage of its iconic 911 sports car alongside the 918 RSR Concept – the Porsche Zentrum is the central hub for the Porsche experience during the week.
Advertisement

This display at Pebble Beach will feature several historic 911 race cars, including the 1979 935 from the Brumos Collection, considered the last remaining unmodified 935 in existence, as well as the 911 S that carried Hurley Haywood to 10 Camel GT race wins during 1972. Other cars will be displayed including a 2011 911 GT3 Cup Car from the Porsche Sport Driving School, the Gunnar Racing 911 GT1 based on the car that won Le Mans overall in 1998 as well as the 2011 911 GT3 RS 4.0.

The 918 RSR concept will be the highlight of the Porsche Zentrum display August 19-20. The 918 RSR concept is a high-end synthesis of Porsche's successful hybrid concepts – the 911 GT3 R Hybrid and the 918 Spyder. It is a 'racing laboratory' on wheels thanks to an updated V8 engine from the RS Spyder racecar generating 563 horsepower at 10,300 rpm n addition to electric motors on the front wheels developing 75 kW, i.e. a total of 150 kW, to provide peak driving power of a staggering 767 horsepower. The power generated during braking is stored in an optimized flywheel accumulator.

The 918 RSR and the displays from the Monterey Classic Car Weekend are a precursor to the cars that will be on the track at the Rennsport Reunion IV October 14-16 at Mazda Raceway Laguna Seca. The event promises an unprecedented gathering of vintage Porsches and current racecars, and drivers who have ridden them to victory in the world's most famous races.

The three-day program of on-track competition is complemented by a concours d'elegance, open to invited race participants and special activities celebrating the decades-long history of the legendary 911 racecars.

Additional details of the Porsche Rennsport Reunion IV along with images from the first three Rennsport Reunions are published on Porsche's press website and Mazda Raceway Laguna Seca's website. Ticket information is available by calling 800-327-7322 or by visiting the raceway site.