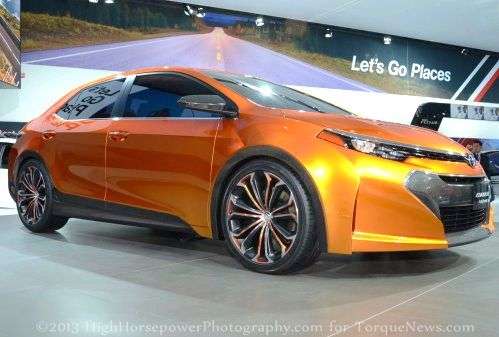 Toyota looks to Chicago even before NAIAS ends

The auto business is hitting a pace set by some of its supercars as Toyota begins to reveal plans for the Chicago Auto Show before its presence at the North American International Auto Show in Detroit has concluded.
Advertisement

The brands 45,000 square foot exhibit in the McCormick Place Complex will showcase American successes during the brand’s storied history.

Among the featured vehicles will be concepts complete with their glimpses of future tech plus some 50 vehicles, including the all-new RAV4 and Avalon. The luxurious all-new Avalon, Toyota’s flagship vehicle, was designed, engineered and manufactured in the US. The Avalon will perch atop a glass platform, made of more than 5,000 pieces of cut glass, with a nearby Avalon “experience simulator,” providing show goers with an intimate view of this revolutionary ride.

“Chicago has long been considered one of the top drawing consumer auto shows in the country,” said Brent Marrero, auto show planner for Toyota Motor Sales USA, Inc. “This year, we wanted the exhibit to not only showcase our incredible products but also our heritage in the United States. We know that ‘made in America’ is especially important to people living in the Midwest, and we feel we have a great story to tell, with 70 percent of all our vehicles sold in Unites States being built here as well.”

Among the concept cars, the Corolla Furia Concept will make its first appearance after NAIAS. This exciting new concept revealed a potential design direction for the world’s best-selling automobile of all time. The Toyota Corolla has sold more than 40 million cars worldwide, with nine million sold in the United States since 1968.

Another popular concept returning to Chicago this year is the Toyota Fun-Vii, a car engineered to connect wirelessly with the infrastructure and autonomous roads of the future. The “Vii” is an abbreviation for Vehicle, interactive, internet. The Fun-Vii has a new wrap in an interactive display for 2013, allowing consumers to change the image on the vehicle’s exterior.

Another tech-savvy feature slated for Chicago is Toyota Driveland, a simulator that uses Kinect technology, which reacts to a player’s gestures like Wii, so no joystick or steering wheel is needed.

Toyota’s will highlight their success in US motorsports compliments of a NASCAR Garage, with a Toyota Sprint Cup car and a Toyota-branded pace car used at the Chicagoland Speedway. In addition a special edition SEMA/Kyle Bush Camry will be nearby, along with a Toyota Racing Development accessories display.

A replica of the stock Toyota Tundra CrewMax that helped transport the Endeavour to the California Science Center last year, towing the 300,000-pound shuttle with the help of its custom-built dolly over the 405 Freeway in Southern California.

Further, the indoor courses highlighting the capabilities of Toyota trucks, SUVs and hybrid vehicles that have thrilled crowds for the last two years. This year, Let’s Go For A Ride will feature seven select vehicles at the indoor program, including the Avalon, Avalon Hybrid, Camry, Camry Hybrid, Prius c, Prius v and Venza.

Attendees who complete the indoor ride and drive, will have the opportunity to designate one of the three charities – American Red Cross, AMVETS and National Park Foundation – and Toyota will make a contribution to that organization on their behalf. In additional bonus, all participants will receive a complimentary gift from Toyota.

The Let’s Go For A Ride program will be in operation throughout the entire Chicago Auto Show, Feb. 7-18, including the Media Preview, First Look for Charity and the Public Show.