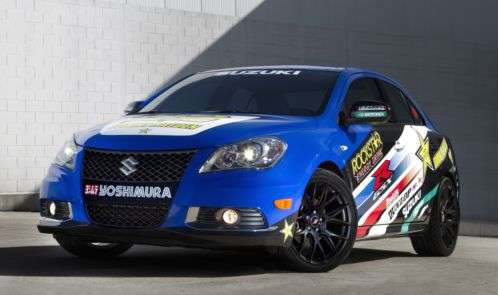 At a press conference last night, American Suzuki Motor Corporation (ASMC) unveiled a gas-electric variant of the Kizashi sedan as well as a turbocharged 275-horsepower version at the 2011 New York International Auto Show (NYIAS). Thereby Suzuki showed not only environmental concern, but a corresponding dedication to those who feel the need for speed.
Advertisement

"We are continuing to study the virtues of the gas-electric technology found in the Kizashi EcoCharge Concept," said Steve Younan, director of automotive marketing and product planning for American Suzuki Motor Corporation. "Our basic concept was to attain substantial gains in fuel economy without the traditional sacrifices in drivability required with today's mid-size hybrid sedans. The proof of our concept is that the Kizashi EcoCharge has the capability to deliver a 25 percent fuel economy gain in real-world driving through an electric charge to the powertrain system while still retaining the production Kizashi's dynamic handling and braking advantages that make it a standout category performer."

The Kizashi EcoCharge Concept gets its power from a 2.0-liter inline-four gasoline engine, working in tandem with an electric propulsion system, consisting of a liquid-cooled 15-kW motor/generator unit mated to a 115-volt air-cooled lithium-ion battery. The combination enhances fuel economy while delivering an electric power boost during acceleration for a more thrilling driving experience.

The Kizashi EcoCharge Concept delivers a 25 percent improvement to highway fuel economy over today's Kizashi. To further increase efficiency, the Kizashi EcoCharge Concept also takes advantage of a number of fuel-conserving technologies, including regenerative braking, automatic engine shut-off when the car comes to a stop, fuel cut-off during deceleration events and low-resistance tires.

Power management via an advanced six-speed automatic transmission is designed for smooth operation and a seamless flow.

"Our turbo-equipped concept leverages the already-exceptional Kizashi platform and infuses it with a substantial boost," said Steve Younan, director of automotive marketing and product planning, American Suzuki Motor Corporation. "The Kizashi Apex Concept will further elevate our flagship sedan in the U.S. among enthusiasts who crave added power and performance."

The Kizashi Apex Concept features a Garrett turbocharger, an air-to-liquid intercooler, electronic boost control, and a specific engine control unit calibration to provide exhilarating performance. This increases peak output into the 275-300 horsepower range, with a maximum boost of 8.5 psi. This powertrain is matched exclusively to a six-speed manual transmission.

The essence of the Kizashi Apex Concept's performance is its air-to-liquid intercooler, allowing more effective air-cooling in a smaller package. The unit's small heat exchanger and circulation pump are minimally intrusive to vehicle cooling. The advantage comes from the reduction in ducting, which creates a faster throttle response and a lower turbo lag, giving peak boost faster than most air-to-air intercooler systems. The Apex Concept also utilizes a free flowing true dual exhaust system.

So in the final analysis, if the buyers who want a hybrid that looks like a hot car equal the buyers who really want a hot car, it’ll all even out somewhere down the road.

die trying wrote on April 20, 2011 - 5:34pm Permalink
Road Race Motorsports contributed to the Apex concept and has hand built every other concept Suzuki has shown since 2007 or so. I have it from a good source that Suzuki often demanded that the parts and wheels be comped. Now as a final insult Suzuki has cosen not to credit Road Race Motorsports for the excellent work they have done for them in the past and announced that they are cutting ties with Road Race Motorsports. Suzuki has no intention of building any performance versions of their current line up. They did the same thing with the SX4 t and Zuk. They create these concepts because they wouldn't get booth space at the auto shows if they didn't. Suzuki's dealership network is virtually nonexistant, their model line up is lacking in models and options, and it was brought to my attention today that they do not care about their customers. I called Suzuki's Corperate 800 number this morning to express my disappointment with their decission to cut ties with Road Race Motorsports. The number I called is posted on their website as the contact for customer concerns and inquiries. I asked to be called back and I was told by "Debbie" that Suzuki does not return customer calls or follow up with customer complaints. That one statement says more about Suzuki as a company than I care to admit. If you don't believe me, my case number with Suzuki was 2-250764380. As a customer of both Suzuki and Road Race Motorsports I can say with certainty that I will follow Road Race Motorsports and leave Suzuki in the dust where they belong.