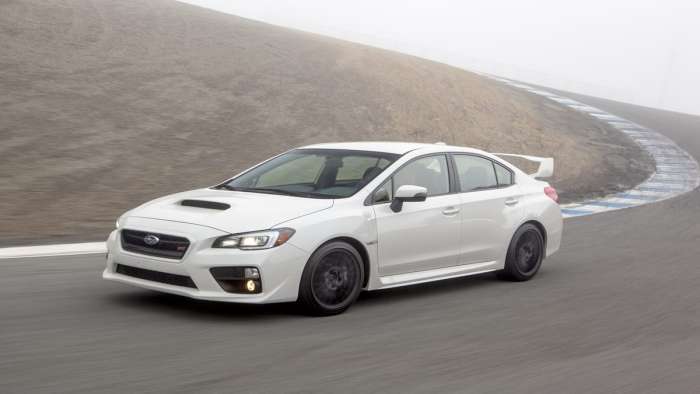 The Subaru WRX is one of the most popular performance vehicles for the middle class. The Tesla Model 3 is priced pretty similarly. But how do they shape up against each other?
Advertisement

The discussion between the Model 3 and the WRX is s pretty good comparison. I am a WRX owner, a 2015, and it’s been modded quite a bit. My field of study is Tesla though, including research over the Model 3. These are actually a pretty good match up. Options would bring the Tesla Model 3 up in price quite a bit but at its base, it is competitive with a WRX. The WRX would be loaded with options at the competitive price level which is a pro for the WRX.

The similarities stop at AWD. The Model 3 LR AWD (long range all-wheel drive) is not only a faster car off the line but it is more comfortable, economical, and up to date. Unfortunately, Subaru hasn’t had the time to really bring the WRX platform up to speed. It weighs in at over 3,200 lbs and comes from the factory with 268 hp. That’s a power to weight ratio of about 12 lbs horsepower.

The Tesla Model 3 weighs in fatter at just over 3,500 lbs and 283 hp, power to weight ratio of 12.4 lbs/horsepower. This is incredibly important because electric cars are naturally really heavy. 3,500 pounds is a lot of weight, but so is 3,200 pounds. When WRX first came to America, the average curb weight was about 2,800 lbs with similar power levels making it a way more fun car back in the day.

The Tesla Model 3's difference today with the Subaru WRX is the refinement. The chassis has been perfectly tuned today in 2020. The stiffness vs. comfort suspension makes it an amazing all-purpose car.

Whether you are driving it to work, or breaking records at the track, the WRX will be there for you. It features state of the art AWD that Subaru has been known for since the 80s. In 2020, they are retiring the “higher performance” model, the STI’s engine. The EJ series motor was Subaru’s flagship engine. They have since moved onto the FA series engine which had it’s debut beginning with a naturally aspirated version in the BRZ/86/FRS. It moved into a turbocharged variant featured in the updated WRX in 2015.

This is the model I have.

The new age motor has proven it’s benefits but enthusiasts will always love the EJ. The EJ featured an extremely distinct noise due to its unequal length headers causing a rumble. The FA has a twin-scroll turbo which allows peak torque way, way sooner than the EJ series offered. This is better in every way minus the sound since it has equal length headers. The boxer motor still gives off a nice sound especially with a full turbo-back exhaust like I have.

The WRX holds its own against the Model 3. The Subaru WRX is cheaper than the Tesla Model 3. It's more designed for a boy-racer type feel. It’s a rally car, vs. efficiency, luxury, and high-tech technology. But at its base price of $27,495 its honestly really hard to get more out of a car for the same price. There is a lot here.

The Model 3 features a whole bunch of pros vs the WRX, but mostly when it comes to quality of life. The Model 3 is not designed for racing, off-road performance, or loud noises. It does however feature battery powered engines and is entirely electric. This means no gasoline.

You plug in your car every night and you have plenty of charge to get to and from work and the grocery store. The car has tons of technological features not to mention its Tesla classic huge screen in the middle. It has a ton of option potential all the way to the performance model.

The sad truth here for Subaru WRX owners is that a base Model 3 would smoke a WRX in a drag race. A rally race definitely not, but a few mods on the WRX could easily reverse this loss. Today we aren’t talking about modified cars. The Model 3 is superior in most cases but it also comes with a heavier price tag, so there’s that.

The Truth About Comparing The Subaru WRX vs Tesla Model 3

The truth of the matter is that the Subaru WRX loses out to the Model 3 in most cases. If you are in the market for either of these cars it is a no brainer to buy the Model 3 but it honestly depends on what your end goal is. If you are just trying to get from point A to point B then absolutely buy the Model 3.

The Subaru WRX is designed for a thrilling driver experience for a super cheap price. If you are looking to have fun and are a performance enthusiast, save some money, mod out a WRX, you will not regret it. This is coming from a modded WRX owner and I’m telling you to buy the Model 3. Here’s to the Model 3 Rally car.

Alex Belauste writes for TorqueNews about all things Tesla. He has worked in the automotive industry for 18 years and has grown to love the culture. Alex writes automotive news based on research, his personal expertise and experience. Alex has studied business at Oklahoma State University and joined the business of the automotive world. Follow Alex on Twitter at @Belauste and on Instagram. Search Torque News Tesla for more daily Tesla coverage from our expert reporters.

LG's New EV Battery Plant Is a Welcome News for Tesla
Tesla Giga Berlin's New Hurdle: It's Not Only the Gov't, but Now Tesla Itself
END_OF_DOCUMENT_TOKEN_TO_BE_REPLACED